In the continuing fallout from Dublin's loss to Mayo, one flashpoint has stood out: the decision not to send off John Small for a late challenge on Eoin McLaughlin. Oisin McConville thinks the issue runs deeper than one challenge, and questioned Dublin's tactics during testy interchange with Dublin great Paul Flynn on this week's Second Captains.

Dublin's John Small hit Eoin McLaughlin hard with a mistimed shoulder late in normal time, and ultimately left McLaughlin with a fractured jaw. The incident wasn't even penalised, and has been discussed ad nauseum by pundits in the days since the game.

On Second Captains, Flynn accused social media commenters and pundits like McConville of fanning the flames against John Small - leading to an extraordinary rant from the Armagh man about the way Dublin are portrayed in the media.

Oisín McConville Legend, calling it as it is.... pic.twitter.com/gZ3Ys30Ew1

(You can listen to the whole episode here)

Flynn: That was a hospital pass, and they're called hospital passes for a reason. It was a blindside hit and John was obviously 100% within his right to go for the shoulder-to-shoulder. He mistimed it absolutely, red card. But the way he's been abused online, in my eyes, has been appalling. Some of the pundits, Oisin included on The Sunday Game, haven't really helped the situation.

Oisin: In what respect Paul? What did I say on The Sunday Game that was bad? I said it was a mistimed challenge, but it's a sending off.

Flynn: You said it was shocking.

Oisin: Yeah, it was! I said the result of the tackle was shocking.

Flynn: I totally agree with-

Oisin: Yeah, well, how has that not helped? What do you want me to say, "it was a great challenge"? "He timed the shoulder perfectly"? I don't get that, I don't get any of what you're saying. I get the online abuse - I don't know what goes on online but I'm pretty sure it's horrendous. When John Small sized Eoin McLaughlin up to hit him with a fair shoulder - he didn't, and the duty of care is on John Small.

Let's take John Small for a second: see that incident there, yes he should have gotten a red card, but that was a genuine attempt to get a shoulder in. When he hit Ryan O'Donoghue a punch in the stomach in the corner of the field - that wasn't genuine. When McCarthy hit O'Connor, that's not genuine. You think that people shouldn't report on that? "Anti-Dublin bias"? Anti-Dublin bias is the biggest load of bollocks, that is pure, total, and utter dung, that's what that is.

McConville's rant left Flynn beside him speechless, but it can't be denied that his analysis of the incident on The Sunday Game was far more reasonable than Flynn gave him credit for.

The cynicism displayed by Dublin on Saturday evening was a sad end to their dominance and McConville's opinion that several Dubs should have seen red is not an unpopular one.

The inquest into the end of Dublin's dominance in Gaelic Football is bound to rage on into the coming months - and if the debates are as entertaining as Oisin McConville's with Paul Flynn, we're in for a treat.

SEE ALSO: When Sporting Dynasties Fall: What The Dubs Can Expect After The End Of Their Dominance 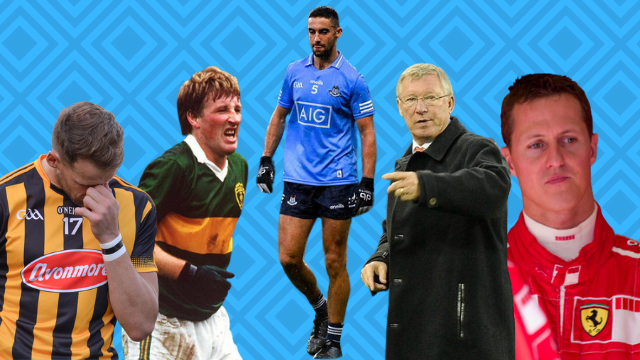 GAA
9 months ago
By Eoin Harrington
Ó Sé & Nugent Among Critics Of Decision Not To Show Red To John Small
GAA
1 year ago
By PJ Browne
'Only For Declan Small's Intervention, Ballymun Kickhams Would Have Folded'
Previous Next

GAA
9 months ago
By Gary Connaughton
Darran O'Sullivan Says Challenges Such As John Small's Must Be Banned From GAA
GAA
9 months ago
By Eoin Harrington
Ó Sé & Nugent Among Critics Of Decision Not To Show Red To John Small
GAA
1 year ago
By PJ Browne
'Only For Declan Small's Intervention, Ballymun Kickhams Would Have Folded'
Popular on Balls
Football
20 hours ago
By Luke Delaney
Europa League Final: Five Arrests As Frankfurt Supporters Attack Rangers Fans
GAA
1 day ago
By Luke Delaney
Jackie Tyrell Calls For 'Accountability' For Players Who Feign Injury
GAA
21 hours ago
By PJ Browne
'I Had Some Troubles In My Later Teens. GAA Wasn't A Big Thing For Me'
Football
1 day ago
By Colman Stanley
Wagatha Christie Trial Sheds New Light On England's Euro 2016 Disaster