Consensus is usually the poison of entertainment when it comes to punditry. Thankfully, at half-time on BBC during Donegal and Derry's Ulster quarter-final on Sunday, there was very little agreement between Oisín McConville, Mickey Harte and Martin McHugh.

Shortly following the half-time whistle, McConville praised Derry, who were ahead - 0-7 to 0-6 - at the time.

"Derry, I can't say enough about them in the first half," said McConville.

"OK, it's defensive football. But you look at the performance of Chrissy McKaigue, Brendan Rodgers, Gareth McKinless has only touched the ball four times but he's been absolutely brilliant. He's played that sweeper role, it's been very unselfish."

Several minutes later, Harte said he wanted to "pick up on something that Oisín said at the start".

The exchange between the two played out as follows:

Mickey Harte: He described this game as defensive. I think that's doing it a disservice.

Oisín McConville: I didn't say it was defensive.

MH: You said there was a lot of defensive football being played here.

OM: No, I said they were getting bodies back.

MH: I'm just telling you to mind the language because it's better to say that it was quality football, and the defenders are the people who are really playing with real skill here today, more than the forwards.

MH: I'm just checking about the description! I'm saying it's real quality. That's what happens in this game: People overlook the quality of defending. My God, it's very hard to be a good defender nowadays because everything is weighted in favour of the forwards.

This half-time analysis is absolute box-office. Mickey Harte, Oisin McConville & Martin McHugh are tearing lumps out of each other. This is tremendous. Coverage continues, BBC2 pic.twitter.com/g6lmWHNqJ3

See Also: Jim McGuinness Has No Sympathy For Ronan McNamee After Red Card 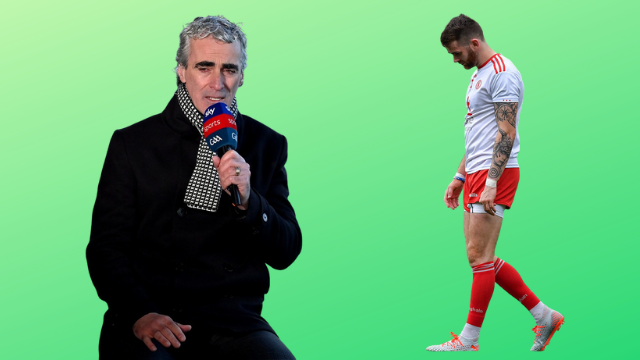