Oisín McConville Sees Reminders Of Own Youth On Trip To Palestine

Armagh’s All-Ireland winner Oisín McConville has urged people to support Trócaire this Christmas after travelling to the Occupied Palestinian Territories to view the development agency’s work.

The 44-year-old former GAA star went with Trócaire to see several projects supporting Palestinians, who are suffering from the devastating Israeli blockade of Gaza and the ongoing occupation of the West Bank.

This year’s Trócaire Christmas Appeal will help to support families who are living in conflict zones around the world. In Gaza, three wars in the space of 10 years and the ongoing Israeli blockade have pushed a humanitarian crisis to a tipping point, while Palestinians in the West Bank are struggling to gain access to their land due to the presence of illegal settlements in addition to suffering constant intimidation and harassment at the hands of the occupying Israeli military.

McConville met with families struggling to make ends meet in Gaza, where 80 per cent of the population are reliant on international aid to survive. In the West Bank, he witnessed peaceful Palestinian farmers being confronted on their own land by Israeli soldiers, while the Armagh native also visited Bethlehem’s AIDA refugee camp where 5,000 Palestinians live in cramped conditions under the shadow of the illegal Apartheid Wall.

Raised in the south-Armagh town of Crossmaglen, Oisín could see reminders of his own youth during the trip. McConville said:

Growing up in Crossmaglen, we faced intimidation and harassment, so I know what that’s like. That’s exactly what I saw over there. Palestinians are suffering and they’re being mistreated. I’m not political, but there’s no doubt about it that this is a political situation and you can’t get away from that, even if you just try to look at it from a humanitarian perspective.

People need to speak out about it. I only had a basic understanding of the conflict heading over, but it’s obvious that the Palestinian people are suffering and they need our support.

Considering his own work as a counsellor and his personal experience of addiction, McConville was particularly interested in Trócaire’s work helping the people of Gaza – an area smaller than County Louth – which is home to  two million. Trócaire helps to provide support to victims of conflict, including women suffering from abuse and psychological issues. 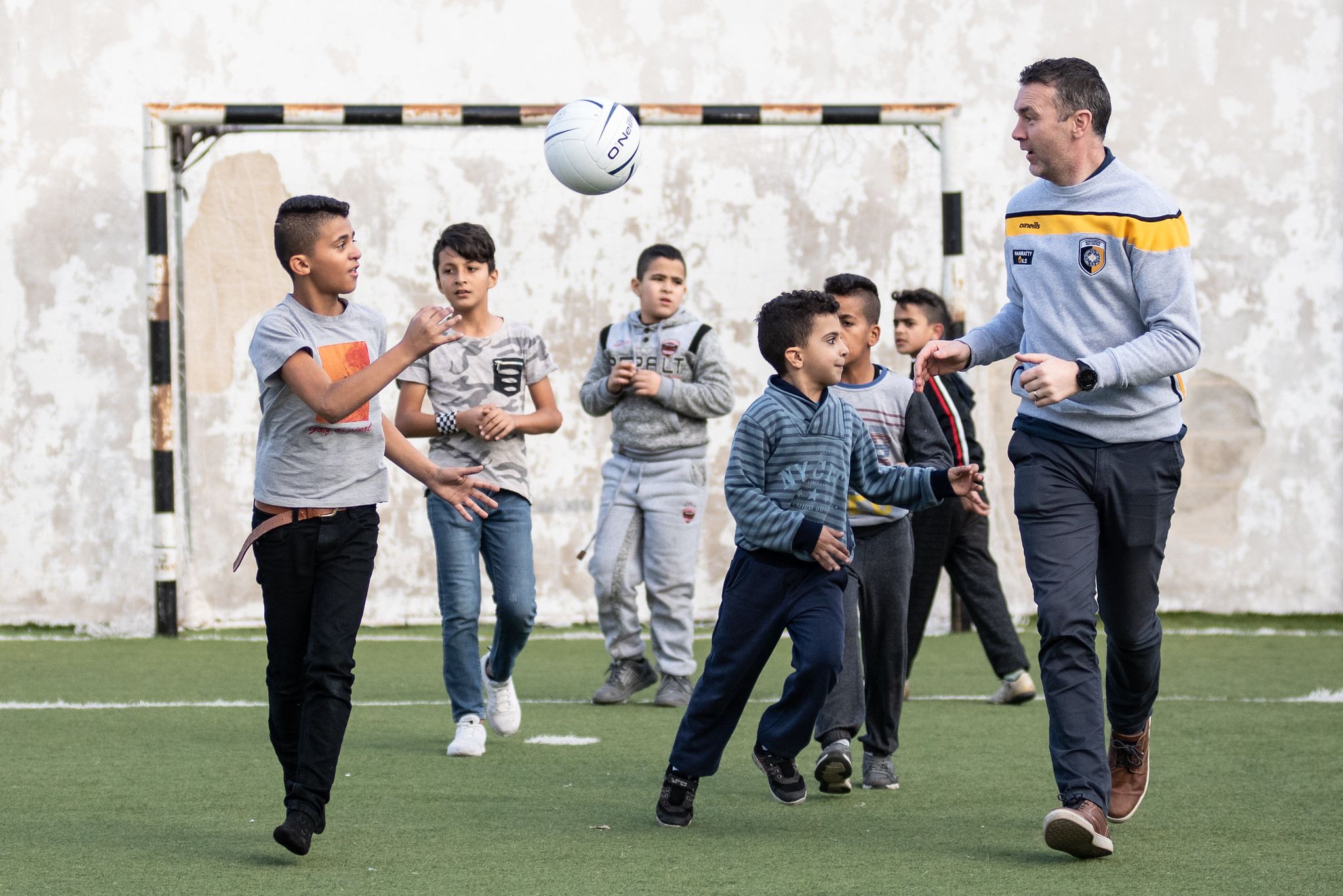 Oisín said: “I’d like to encourage people to support Trócaire and their work over there. I was very impressed to hear about the work supporting mental health, the psychological support for people who have been absolutely devastated by war, and the blockade has only made things worse.

“I had a gambling addiction myself. It was only when I came out the other side of my treatment that I realised a lot of my trauma had come from the conflict [in the north of Ireland]. Part of that would have been a lot of intimidation, oppression and harassment and sometimes you just didn’t feel safe.

“It was only later that I realised it was all part of my trauma. One of the reasons I ended up with an addiction was because I was dealing with my trauma through gambling. This can manifest itself in many ways – through addiction as well as domestic violence and gender-based violence.

“That’s why seeing Trócaire’s mental-health work in Gaza was so interesting for me. I’m very interested in education in this area. The work going on over is well worth supporting.”

GAA
5 days ago
By Jonathan Browne
Oisín McConville Had Two 'Automatic' Full Forwards In His Greatest Team Of The All-Star Era
GAA
5 days ago
By PJ Browne
15 For 50 - The All-Star Football Team Of The Last 50 Years, As Chosen By The Experts
GAA
1 week ago
By Michael McCarthy
Who Is The All-Star Midfield Duo Of The Last 50 Years?
Popular on Balls
Rugby
1 day ago
By PJ Browne
Jackman Explains How Barman Helped Connacht Recruit Mack Hansen
The Rewind
16 hours ago
By Colman Stanley
New On Netflix Ireland: Your Guide To December's New Additions
Football
20 hours ago
By PJ Browne
MK Dons Boss Criticises Troy Parrott After Red Card Against Leyton Orient
Football
18 hours ago
By Jonathan Browne
Ralf Rangnick's Manchester United Transfer Wishlist Contains Some Massive Talent