It was the type of colour you want - but don't always get - from a native commentator; the garlic dip that sometimes comes with a takeaway pizza.

The statement threw up a couple of questions: Would having three kidneys really make you a better hurler? And, more importantly, why did Oisín O'Gorman, the scorer of the Lismore goal, have one kidney fewer than most of us?

Moments earlier, a long ball from the Lismore fullback line scaled the Abbeyside defence and rolled down the other side into the possession of O'Gorman. He raced through on goal and batted the sliotar to the net, rolling away with his fist raised in celebration before remembering there was another hour of defending from the front to be done.

The 19-year-old scored 1-5 in all, helping his side progress to the semi-final where they lost to the Ballygunner seven-in-a-row steamroller.

The answer to why Oisín has just one kidney is found 12 years ago in the week before the 2008 All-Ireland final. That game is a nightmare Waterford hurling fans will never forget. It was the day they met Kilkenny at their most monstrous and walked out of Croke Park on the end of a 23-point defeat.

For the O'Gorman family, the week was the beginning of a year-long ordeal which made matters on the pitch trivial.

"I was just out playing, came off the bike and the handlebar went into my stomach," Oisín O'Gorman tells Balls.

"It didn't go through the skin or anything but I knew that there was something wrong."

It took Oisín's parents, Jennifer and Kieran, some time before they realised the precariousness of their seven-year-old's situation.

"We were on the way to Waterford in the back of the ambulance and we were chatting away," says Kieran.

"I was on the phone still trying to organise tickets for the All-Ireland final on the Sunday, not thinking that it was serious, 'Ah, he's sore, he's after falling off his bike; he might have a broken rib or two but we'll get to Croke Park on Sunday' .

"He went into semi-unconsciousness; by the time we got to Ardkeen, he was knocked out. They said they'd have to bring him to theatre because there was the laceration in the kidney.

"Jennifer and myself were outside the operating theatre and the surgeon came out and said 'Look, I'm very sorry but we had to remove the kidney'.

"We were upset but I said, 'Relax, now, he'll be fine, he has another one. Remember Seanie O'Leary from Cork that hurled against your father? He has only one kidney. He'll be fine. He'll manage away fine with one'.

"Jesus, 20 minutes later, the surgeon came out and said, 'I'm very sorry but Oisín only had one kidney; only one had developed from birth'. We didn't know prior to the accident."

As is tradition, on the day after their victory, the All-Ireland champions visited Crumlin Children's Hospital with the Liam MacCarthy Cup. There, Oisín - who had fallen asleep during the game (a small mercy) and was pumped full of drugs to numb the pain (of surgery, not Waterford's defeat) - met Kilkenny trio Brian Cody, Henry Shefflin and Michael Kavanagh. It's a meeting he vaguely remembers. 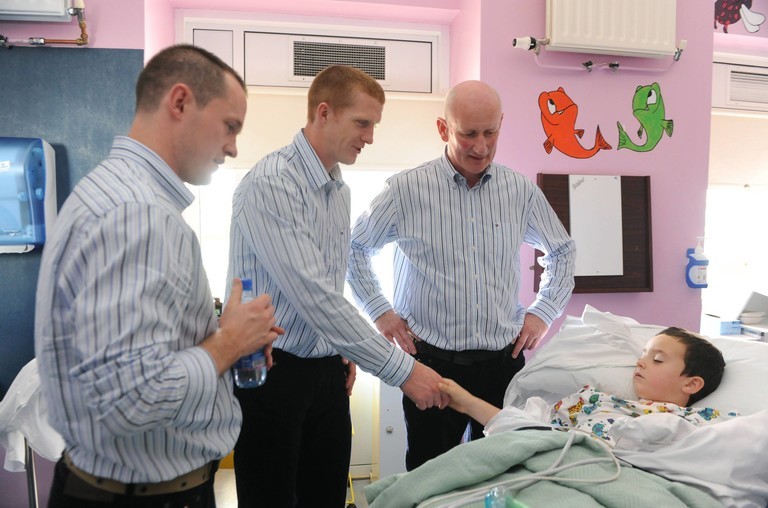 Oisín was not immediately placed on the transplant list. Having undergone surgery three times in four days, his body would not have been ready for an operation even if a viable organ had been available.

It was November before the possibility of a transplant was even discussed. Kieran and Jennifer decided they'd get tested to see if they were a match for their son.

Hitting the winner in an All-Ireland final - even if it ended Waterford's 60-plus year drought - would not compare to the moment which followed: Kieran was compatible.

Between the initial surgery and the transplant on June 23rd, Oisín was not wrapped in cotton wool. He travelled to Dublin three times a week for dialysis - a process which replicates the function of the kidneys - but he continued to hurl. At one point, he had a dialysis appointment rearranged from midday to 8am so he could play in a match.

"When he was on dialysis, we were more careful of him than what we are now, " says Kieran.

There was one night that they were playing and under-8 match and he got a little tap on the leg. Like all eight-year-olds, he went down looking for something.

It was either Matt Prendergast or James Shanahan who ran on with a bottle of water for him. Myself and his mother were there shouting, 'Don't give him water!' He was on fluid restriction with the dialysis. If he'd taken a cup of water, he'd have had to go straight to Temple Street.

Life wasn't easy for the O'Gormans when Oisín got sick. They had to take a break from work and caring for their younger son, Fionn, was outsourced to Kieran's parents and other family members. The help of Lismore primary school principal Seán Prendergast - one of the great hurling men of that part of Waterford - and Oisín's teacher Patricia Lonergan was invaluable at the time.

Kieran - who played at minor and U21 level for Waterford in the early 90s - went back training with Lismore to keep his weight down ahead of the transplant. He played a couple of challenge games "because the lads were stuck" but that return ended when they got the surgery date.

"That was the end of the hurling from then to the transplant because a cut or an infection [could have caused a problem] - I was afraid to shave myself," says Kieran.

Initially, it appeared as though the surgery had gone well. Three days after the operation, Kieran - who had been recovering in Beaumont - was allowed to visit Oisín in Temple Street and a day later, Kieran was allowed home.

"Then on the Tuesday morning, at about seven o'clock," Kieran says, "Jennifer rang me to say that her father would collect me in half an hour and that I had to come to Dublin.

"I said, 'What's wrong?' She said, 'Oisín took a turn last night and got a seizure and had to be resuscitated'. It's a thing that can happen after transplants.

"That was on the Tuesday. The following Thursday he had go back into theatre because the kidney was working but, as Dilly Little, the surgeon, said, 'Look, it's grand, we'll sort it. It's plumbing problems'.

"My kidney was big on him and they were having difficulties connecting it to the bladder. The kidney was doing its job producing the urine but it was leaking into his system and he was getting infections.

"Then he had another operation on the Friday. It was up in the air for a week and a bit.

"Thankfully, he hasn't looked back since then.

"His consultant in Temple Street, Dr Atif Awan, should be canonised. He's a gentleman. Not just Oisín, he treats everyone like his own. He's a fantastic man and all the staff there, I couldn't speak highly enough of them. 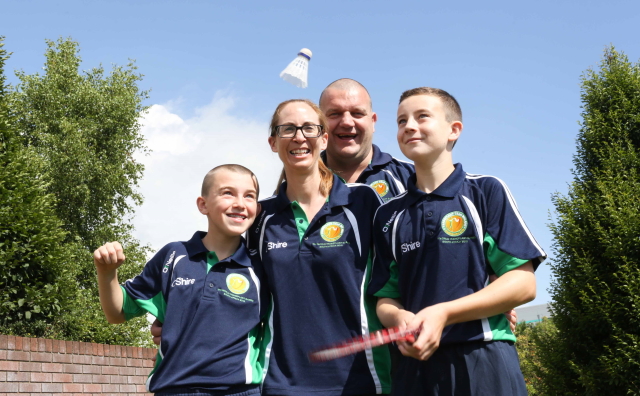 Determined that he wasn't going to be forced into retirement aged eight, Oisín did not settle for the doctor's conclusion. As the transplanted kidney had been placed in his belly, and so did not have the protection usually provided by the ribs, external armour was required.

"We went into Dublin," says Oisín, "into a shop and we bought a kickboxing vest - a big, bulky vest. We had to go up and show Atif and make sure it was A1 with him."

It was, and from there, Oisín's sporting career was on an upward curve. He has competed for Ireland at the World Transplant games, winning gold medals, and played at minor level for Waterford in 2018.

"It was a dream come through really after being so sick and thinking that you'd never play again," says Oisín.

As you get older you begin to become more thankful. You appreciate it more because you realise everything that he (Kieran) went through.

I remember he put a lot of work into getting the weight down. When I look back at it, it's phenomenal what happened. I wouldn't be here without him.

Though he had some understandable concerns about playing a team sport in the middle of a pandemic, this year was Oisín's second hurling at senior level for Lismore.

The one-inch thick vest which he wore through the early years is gone, replaced by the lightweight EvoShield, a solution Kieran spent hours searching the internet for and eventually discovered was being sold by a man in Offaly. Oisín has never received a blow to the vulnerable area but is confident the guard, which is moulded to his body shape, offers protection which makes worrying pointless. The teenager also continues to take anti-rejection medication morning and night.

"I wouldn't say that I get any special treatment because of the kidney," Oisín says of his Lismore teammates.

"We'd all look after each other when we're out there.

"I got wicked sick last year from tonsillitis - I pick stuff up easily. I came back training too soon and they could all see that I wasn't right.

"A few of them went to management and said, 'He's not right. Bring him home'. Little stuff like that, they'd always look out for you. Management told me to take a week and get myself right. I took the week and I was back right as rain."

Neither does he receive any special treatment from his father.

"When it's your own fella playing senior hurling, you would be even prouder.

"The message to get across is to look at what can be achieved through organ donation. Oisín was lucky that I was a match. Some people can be years on a waiting list.

"I'd like to encourage everyone to carry a donor card. I brought 100 of them up to the GAA field in Lismore one day. All the lads took them and hopefully they're still carrying them.

"Oisín's success story is that he never looked back from it. It just goes to prove that you can lead a normal life after and that you can achieve on the sporting field, academically, or whatever you choose to do. The opportunity is there thanks to people being donors."

Organ Donor Cards can be obtained by phoning the Irish Kidney Association on 01 6205306 or Free text the word DONOR to 50050. You can also visit the website www.ika.ie/get-a-donor-card or download a free ‘digital organ donor card’ APP to your phone.