Donegal. What a way to say goodbye. Over the past three successive years, they finished third, fourth and fourth in Division One until this season when they mustered a second from last finish. They had not lost a league or Championship match in ­Ballybofey since 2010 and led against Mayo for the entire second half.

Yesterday they did not lose but it sure felt that way for a dejected Declan Bonner, as he told BBC Northern Ireland after the game.

It is very disappointing. It is a game we should not have los- we shouldn't have drawn.

We could not get our noses that four points ahead. Mayo kept coming back, to two points to one point... Just so disappointing the way we conceded the last score. 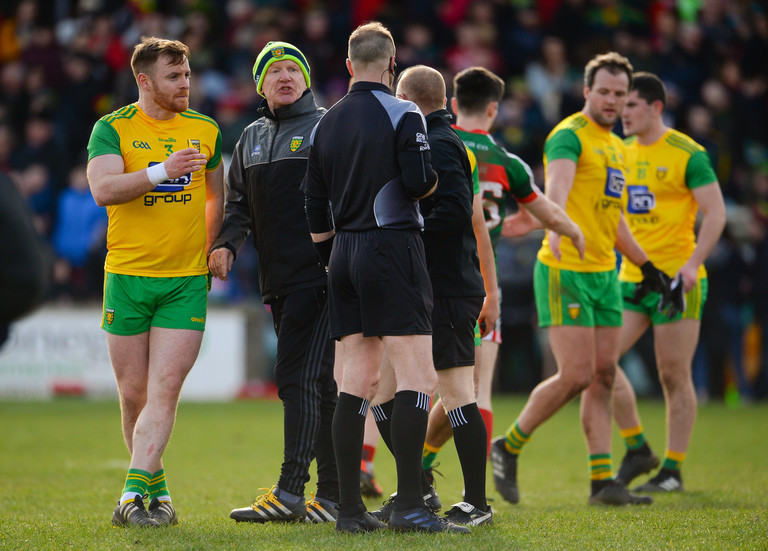 They did have an opportunity to edge four points ahead. A long Michael Murphy free was well-won by an out-in-front Patrick McBreaty who spun onto his right boot. Two inside forwards called for the pass but the Kilcar man doubled back and his left-footed effort fell into David Clarke's grateful hands.

Over the prior 74 minutes, McBrearty had kicked four points having just returned from a knee ligament injury. With the clock in the red, he sought to close out the game and put it beyond Mayo. It came just minutes after his team-mate Odhran MacNiallais had a better-placed opportunity on his left boot which he dragged wide.

A fully fit McBrearty in that kind of position would be a certain scorer but Bonner gambled and risked his star forward, who had notched up 0-30 in his first four league games before the injury. To a certain extent, the gamble paid off as he was their top scorer on the day.

What a score from Donegal's Paddy McBrearty at such an acute angle! pic.twitter.com/RSVSBEy70b

What is telling is what happened after his dropped shot. Donegal were presented with three opportunities to drag their opposition to the ground. With less than a minute of additional time left the chance to kill the counterattack and waste some time was not taken.

The ball is collected by Clarke who handpasses immediately. 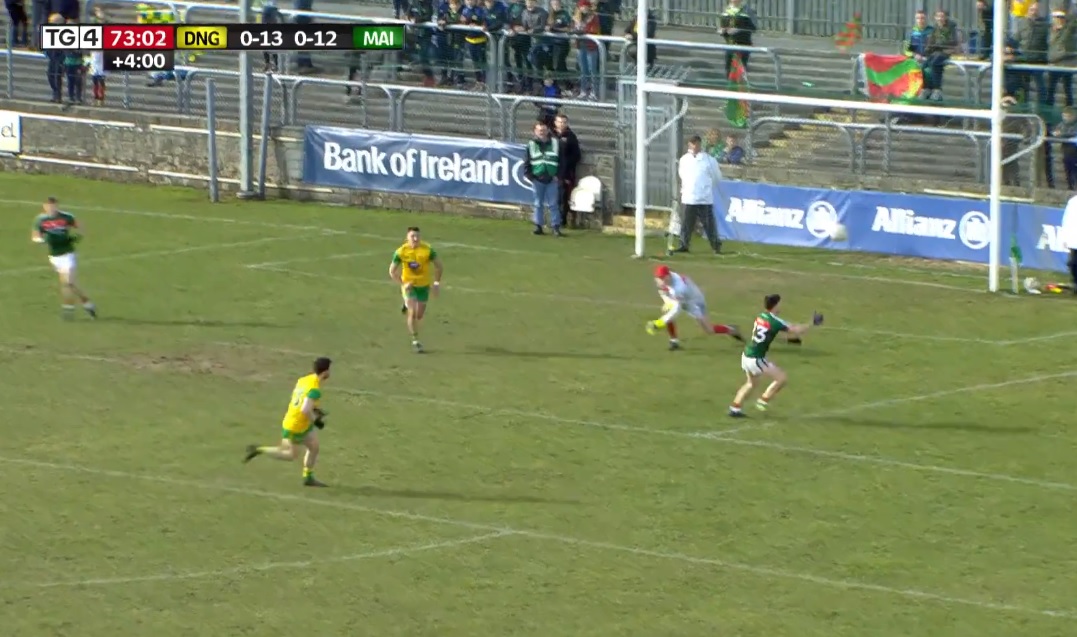 The first tackler gets a hand on but Fergal Boland breaks through. 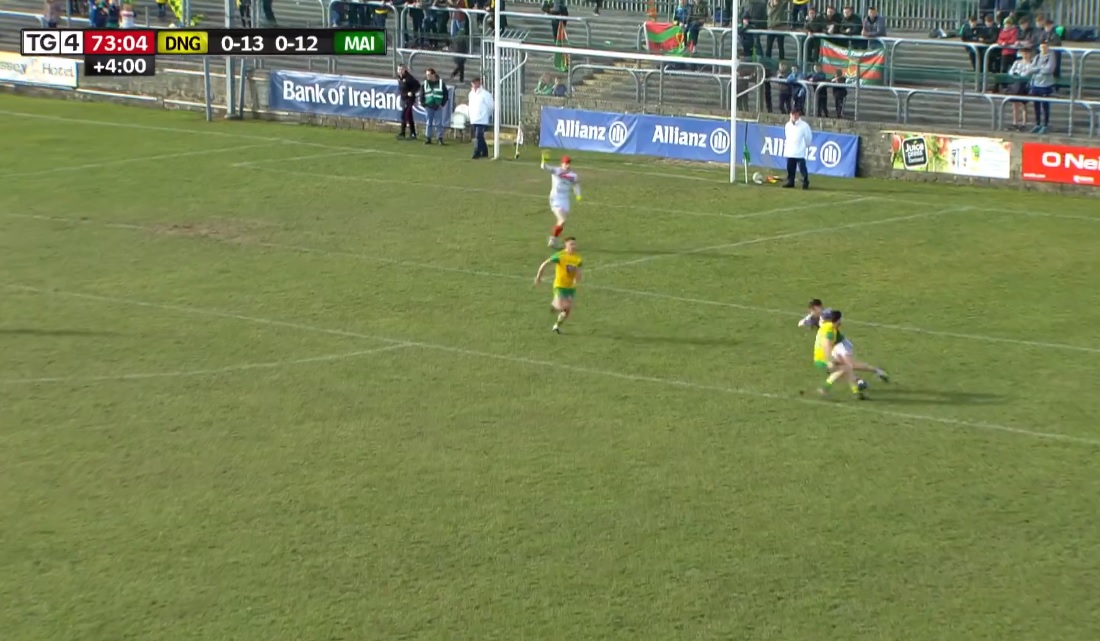 Shortly after Boland has another hand laid on him but continues unhindered. 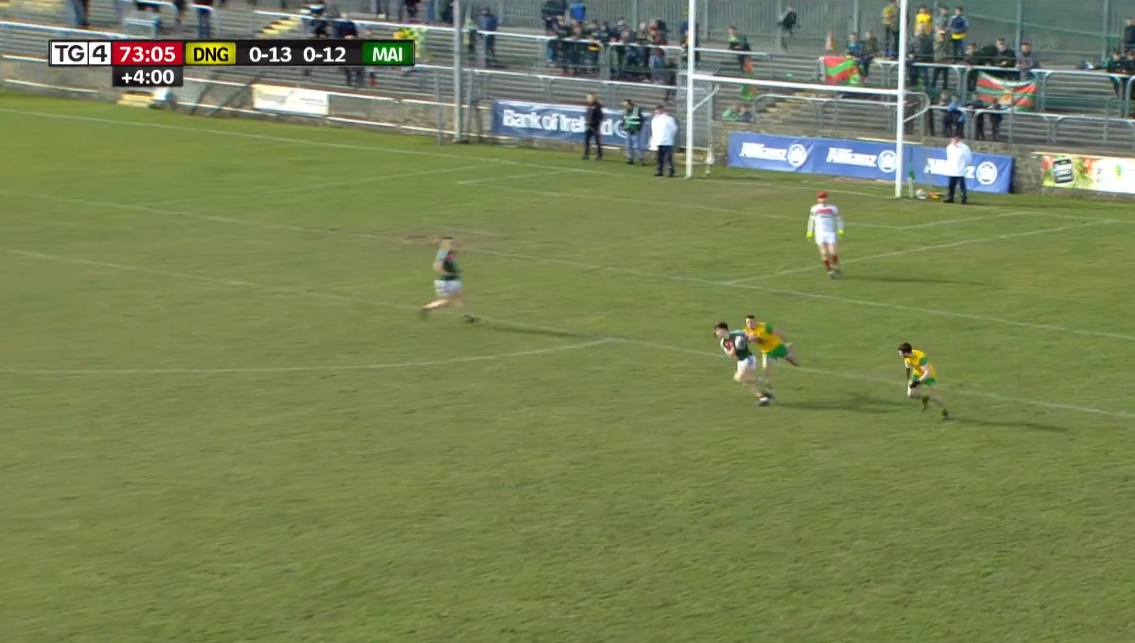 Aiden O'Shea is met by Hugh McFadden but offloads to Conor Loftus. 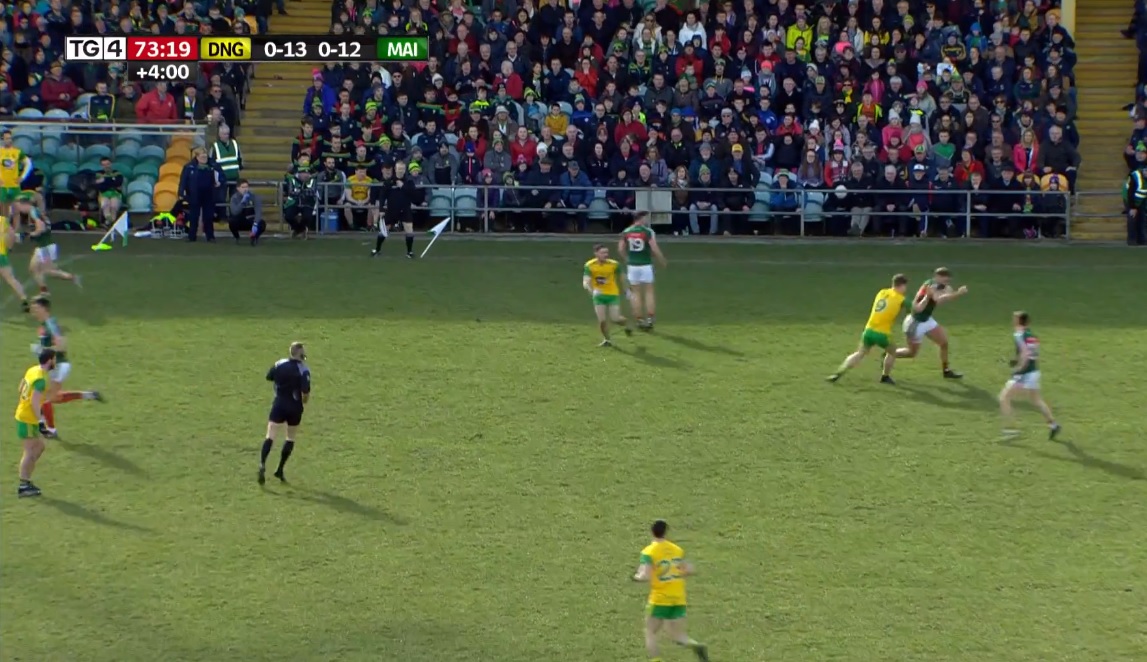 Kevin McLoughlin with the crucial point to leave the sides even as the ref blows the whistle pic.twitter.com/Rrj6zuSmCN

Donegal's reward was Kevin McLaughin taking 13 steps and kicking the equaliser. Mayo immediately instigated a melee, demonstrating the lessons learned from Dublin's manner of closing out last year's All-Ireland final. Had Donegal elected to do precisely what Dublin did in Croke Park last September or what Mayo would go on to do in the dying minutes at Seán MacCumhaill Park they would look forward to another year in the top tier.

Afterward, Bonner spoke about going for one more score to stretch the gap. The lesson learned is to disregard that approach. Activate strategic shemozzles because right now, the punishment does not fit the crime.

The referee did not add on any more time despite the stoppage and the only punishment doled out was two yellow cards. There has been considerable reaction to this. Ciaran Whelan implored the GAA hierarchy to tackle this current trend on last night's League Sunday while Mayo's Andy Moran admitted he didn't want to see it and that a new rule could be introduced. However, Moran crucially stated it is now part of the game.

That is the fact of the matter and fundamental flaw within the process. Donegal's fatigued bid to go for a score and subsequently make an honest tackle committed them to relegation. McBrearty's miss in hindsight looks thoughtless and an inability to ‘close out the game’ as a weakness. This is a flaw that punishes positivity and rewards the cynical. Declan Bonner’s men look naïve, Rochford’s battle-hardened.

Despite relegation, there are numerous positives for Donegal's League campaign. Michael Murphy out in the midfield with McBrearty inside gives a better balance to the team. They used 35 players throughout the league and unearthed gems in Eoghan Ban Gallagher and Jamie Brennan. However, because the game exists as it does Mayo will face little backlash for their perfectly executed heist and Donegal will evolve to learn from last year's finalists. The current rulebook allows for this and pretending otherwise is senseless. Right now, the game is the game.

GAA
1 year ago
By Evan Coughlan
Watch: Cracking Conor Boylan Goal Helps Limerick See Off Laois
GAA
1 year ago
By Michael Mulkerrins
The Damning Stat That Shows How Clare's Defence Is Killing Them
GAA
2 years ago
By Maurice Brosnan
Relentless Mayo Do It Again With Kevin McLoughin Screamer At The Death
Previous Next