A Decade After Memorable Debut, Paddy McBrearty Is One Of The Best

As part of our GAA Embedded coverage, each week we will profile a player in action over the coming weekend. This week, it's Donegal forward Paddy McBrearty.

When the final whistle blew on the 2011 Ulster minor football game between Antrim and Donegal, Paddy McBrearty was rushed off the field and sat in front of a plate of pasta. His day's work wasn't done yet.

The then 17-year-old scored 1-3 in that minor game, one his side lost by five points, but the defeat likely didn't dwell on his mind for long. He'd been one of the stars of the curtain raiser, but he also had a part to play in the headline event.

Two months previous, Jim McGuinness - in his first season as Donegal senior manager - had called the Kilcar forward's father. He wanted the fifth year student to join the senior panel. Initially, Seamus McBrearty was hesitant, but he was persuaded.

So, with 18 minutes to play between Donegal and Antrim in the Ulster SFC preliminary round, the teenager replaced Dermot 'Brick' Molloy, and became a piece of trivia: He was the first Ulster footballer since Down's Benny Coulter to play minor and senior championship on the same day.

"The interesting thing was that Donegal got a free just seconds after Patrick ran onto the field and straight away he was up around Michael and Colm volunteering to take it," McGuinness said in his autobiography.

"I loved that. He was 17-years-old and he was saying to them that he was here on merit and that this was his stage."

A month later, he started his first championship game, and scored 1-3 as Donegal beat Cavan in the Ulster quarter-final en route to winning their first provincial title in 19 years.

The following year, he started every championship game as Donegal won their first All-Ireland in 20 years.

At a media night before the final against Mayo, McBrearty gave a sense of the drive which had earned him that starting spot.

"This is exactly where I want to be," he said.

I'd rather be doing this here (playing with Donegal) than going for a night out to a pub or a nightclub.

This has always been part of the plan. When I was 14 or 15, boys might be out drinking or whatever; when I was on my first night out, one of my mates said, 'Just take a drink'. I said I had things on my mind. I wanted to be one of the best footballers in Ireland, I said that at the time.

A decade on from his debut, McBrearty has established himself as one of the country's finest forwards. In 54 championship games, he's scored 6-152, an average of just over 3.1 points per game.

Prior to a knee injury ending his 2018 season, and preventing him from playing in the inaugural Super 8s, he'd played a part in every championship game for Donegal.

He has also developed some remarkable consistency. In the past seven seasons, only twice has he failed to score in a championship game, the last one being the 2015 All-Ireland quarter-final defeat to Mayo.

Late in Sunday's Ulster quarter-final against Derry, when Donegal needed someone to take a shot for victory, it was no surprise that McBrearty - who 10 years previous was the brash teenager telling Michael Murphy and Colm McFadden he wanted to take the frees - was the one to pull the trigger.

This weekend, Tyrone stand in the way of McBrearty playing his 10th Ulster final. In seven championship appearances against Tyrone, he's scored 0-18.

If Donegal are to be genuine All-Ireland contenders, it can't be Michael Murphy to whom they always look for inspiration. They need an ensemble performance from their cast. McBrearty can be the Brad Pitt to Murphy's George Clooney. 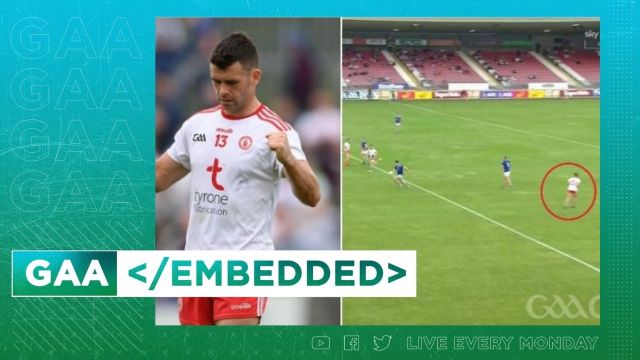 GAA
1 week ago
By PJ Browne
Even In Neighbouring Parishes, They Celebrated Mountbellew/Moylough
47