Philly McMahon and Ballymun Kickhams lost to St Vincent's by 0-12 to 0-11 last night in the Dublin senior football championship - but a moment between McMahon and a young fan in the aftermath epitomised the unique attraction of the GAA.

As the final whistle blows at the end of the semi-final of the Dublin senior football championship between Ballymun Kickhams and St Vincent's, Ballymun's Philly McMahon finally stops. Nothing signifies defeat for Ballymun more than McMahon's resigned motionlessness. His physical and verbal efforts cease for a moment and defeat holds him, briefly, glued to the Parnell Park surface.

Soon, the crowds will reach him and he will stand for photographs and sign autographs before politely excusing himself and jogging from the masses into the sanctity of the dressing room. 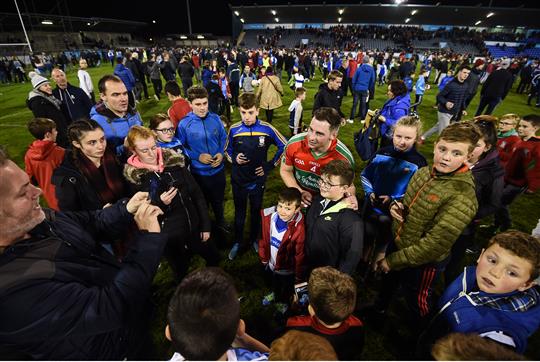 But before all that, before the wave of supporters encroach onto the pitch and he is engulfed, one young fan reaches him first. A small boy runs onto the pitch and stands, briefly, looking up at McMahon before reaching out to point at what McMahon is holding in his hands. The player looks down and sees that he is holding his gloves before nodding and handing them to the boy, ruffling his hair and walking on towards the dressing rooms. The boy runs off, proudly displaying his trophies to his friends at the sideline and possessed of the playground bragging rights for at least a week.

If you were to ask McMahon about this event there is every chance that he wouldn't remember it. But it was a lovely little moment that we would perhaps only find in the GAA - a young fan getting the chance to directly interact with a high-profile practitioner of the game, perhaps one of his heroes, and come away with a precious memento. It was symbolic of the relatability of the GAA player, the accessibility of them and that kids can perhaps more easily aspire to success because of that relatability. 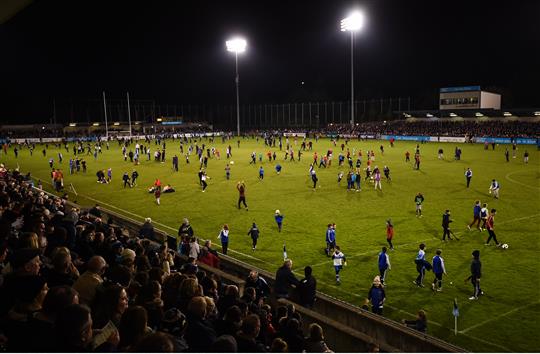 When dozens of kids ignored the doomed pleas of the stadium announcer and ran onto the Parnell Park field at half-time - pucking sliotars and kicking footballs - they did so on the same soil and surface where Diarmuid Connolly produced flashes of utter footballing poetry that held even the youngest spectator in Parnell in open-mouthed, awestruck silence.

Skill of the highest order juxtaposed with a real and tangible groundedness in its participants, a real connection between players and fans - therein, in its simplest form, lies the naked and basic appeal of the GAA.

SEE ALSO: How Many Counties Would This Combined St. Vincent's-Ballymun Team Beat?