Our Photo Tribute To GAA Players Who Wear Their Socks Up

What is the psychology of a GAA player who wears their socks-up?

No doubt there are numerous post-doc theses exploring this phenomenon but rarely has it been discussed in the mainstream.

These men are the brooding artists of the GAA. They revel in being different, enigmatic. They are often perceived as egotistical individualists and as such they are a lightening rod for criticism for the traditionalists.

For whatever reason, in football at least, a disproportionate amount of them operate at centre-half forward in a playmaker-like role and derive enormous joy (though their face would be never be earnest enough to betray an emotion like joy) from kicking the ball with the outside of the foot.

(Ironically their soccer equivalent would be Rui Costa who was famous for wearing his socks down, showing the world his shin-pads).

Indeed, as can be seen in the case of Padraic Joyce and Colm Cooper below, many players have made the change to a socks-up policy as a means of asserting their playmaker credentials.

They are rarely honest-to-God full backs who derive the greatest pleasure from dispensing hardy shoulders. Nor are they often doughty, humble corner backs who are happiest when their marker doesn't score. Nor are they usually horse midfielders, foraging ball-winners who are gluttons for hard work.

But there are outliers.

Here is our tribute to those GAA men, increasingly rare in recent years, who dare to wear their socks-up. 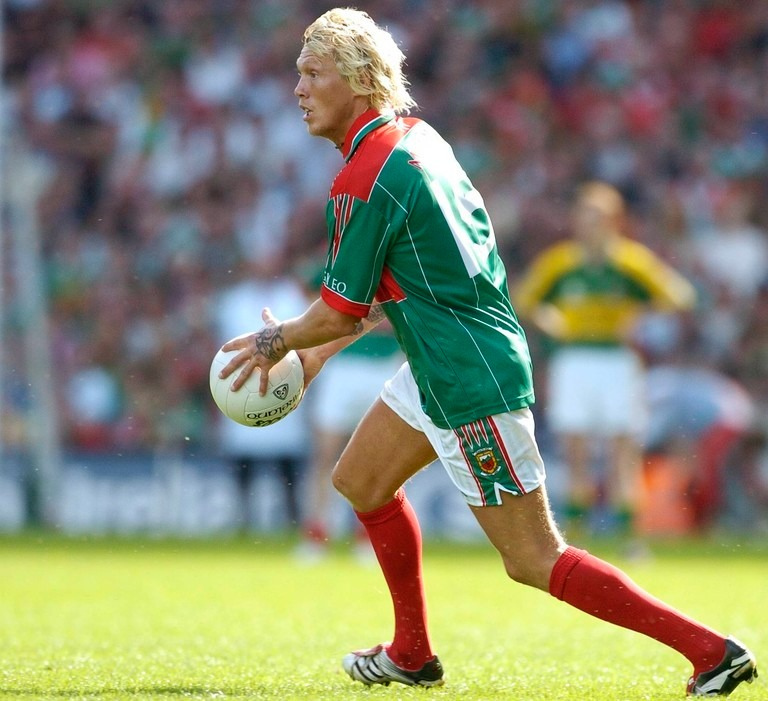 McDonald had everything a player who insists on wearing his socks up needs to have if people are going to let him away with it.

A languid centre-forward, who loved nothing more than dropping deep and swerving outside of the boot passes into the arms of sharp-shooter corner forwards.

The long socks were a lot more common in the 1970s and '80s, but nobody wore them like the great Nicky English. Helpful for the occasion bout of soccer he'd take part in during a hurling game, no doubt. 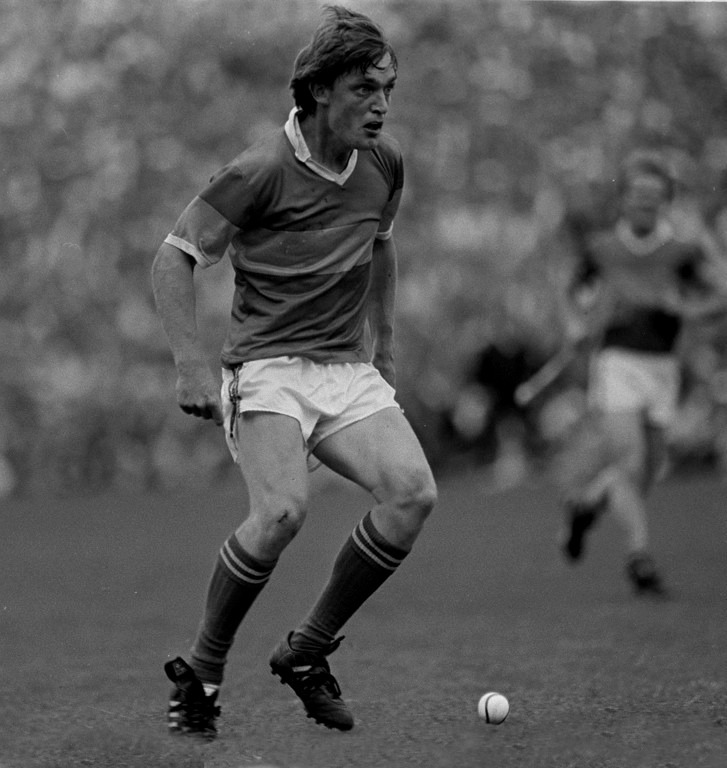 Early in his career, when Galway were winning All-Irelands and Joyce was accompanied in their forward line by Michael Donnellan and Ja Fallon, the current Galway manager was a marksman style full-forward. As such he tended to wear his socks down. 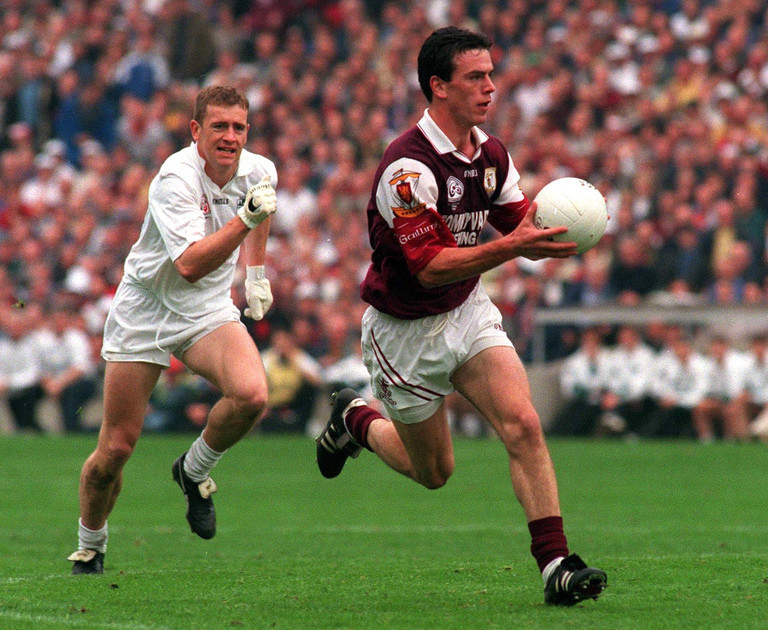 Late in his career however, as Galway declined and he became even more important to the team (worryingly so, in fact) he dropped into the centre-half forward playmaker role. In order to establish his playmaker aura, he decided to change the way he wore his socks. It was an ingenious move. 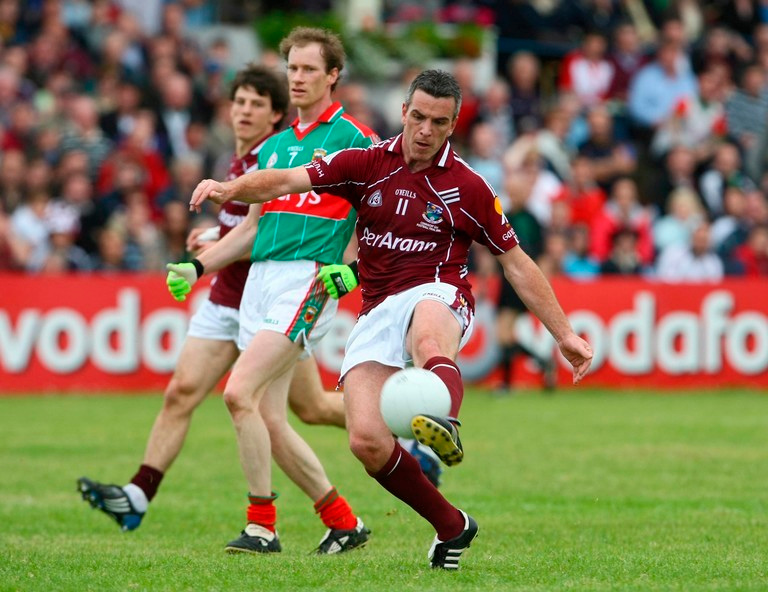 With the help of his new sock policy, he effortlessly made the transition from the inside-forward scorer-in-chief to elegant provider who pulled the strings on the forty metre line. A lesson to all aspiring stylish centre forwards. 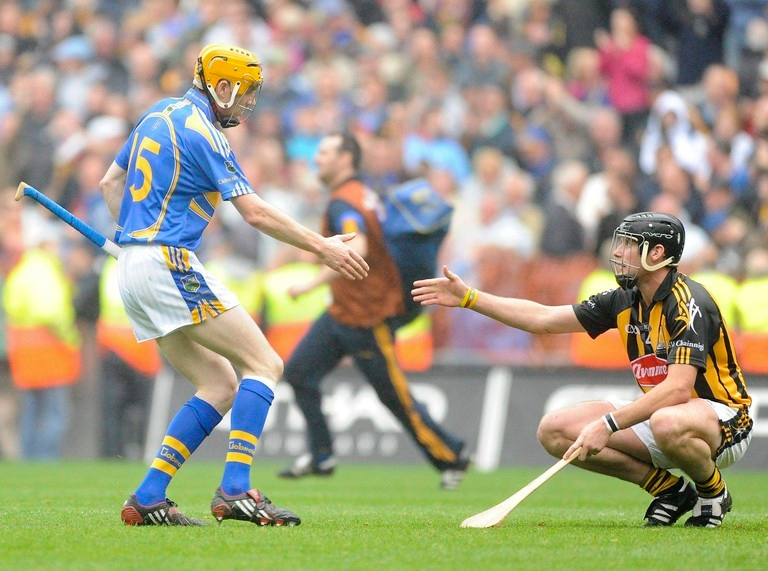 As a neophyte corner forward back in the All-Ireland winning year of 2001, Lar wasn't bold enough to chance the socks-up policy.

However, as he became more prominent in the Liam Sheedy era, he altered this as a marker of his new stature.

He has many of classic foibles of socks-up type players; dramatically announcing one's retirement, indulging in overly clever tactical gambits that don't work, writing confessional books explaining one's stance, prompting accusations of self-indulgence on the pitch ('twas Daithi Regan who levelled that one after the 2012 Munster Final).

The socks-up approach to sporting fashion attracts attention to oneself.

On good days like the 2010 All-Ireland final or the 2011 Munster Final, this can be glorious. On bad days, like the 2012 All-Ireland semi-final, the results can be disastrous. 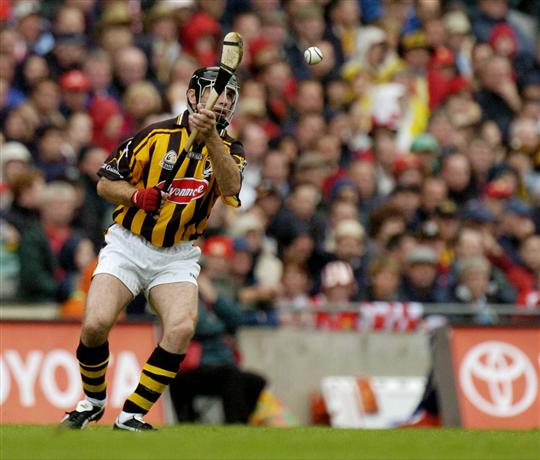 DJ had that touch of tortured genius about him that often precipitates socks-up policy but he had the elegance and class on the pitch to pull it off.

Like another socks-up wearer Lar Corbett, he announced his retirement early on but reneged on this decision before long. While there are always mitigating circumstances and other pressures involved in a decision, it is nonetheless classic socks-up wearer behaviour.

DJ combined his socks-up look with a hurling glove and a was an early convert to the Cooper hemelt/modern faceguard combo before it became the compulsory look for hurlers. A pioneer in every way.

My Cavan born colleague informs me that Ulster players are less susceptible to socks-up wearing than the dandies who populate the game in the other provinces.

I'm dubious of this (although perhaps it's true of Cavan) and it is certainly not the case in Down, the home of slinky, stylish forwards back in the early 1990s.

Given the type of player Greg Blaney was (fifth from the back in the above parade), it would have been a cause for censure if he had gone onto the pitch without his socks up.

Unorthodox and clever, Blaney is another Type-A socks-up wearer.

Since then, Down's have continued Blaney's example with the like of Conor Laverty and Martin Clarke. 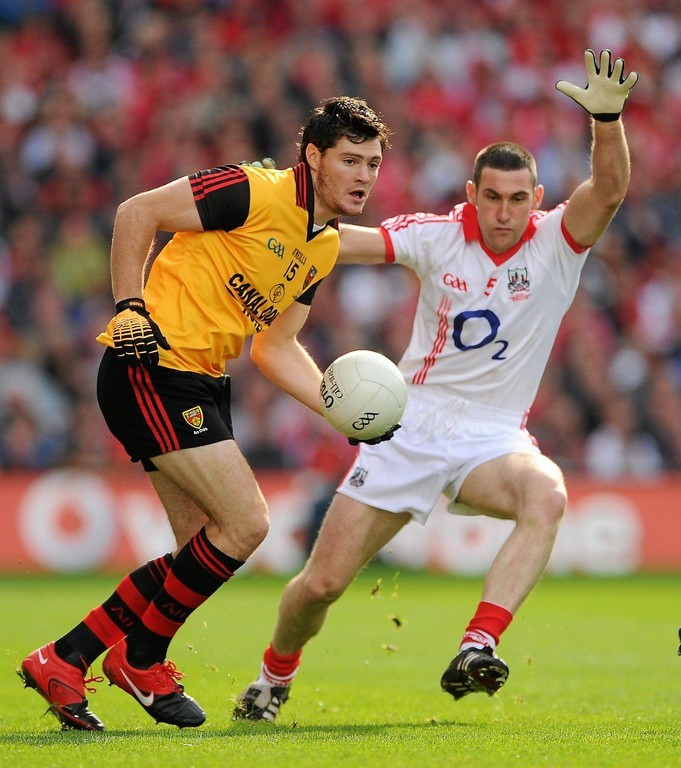 This was actually a trait with modern Dublin forwards in general, though the trend is sadly going in the other direction. Paul Mannion has reverted to more sensible attire in recent years after bursting out of the blocks for Dublin with full socks. Even Eoghan O'Gara was suddenly in low cut socks for the 2018 season, while Paddy Andrews gave up the ghoest in 2017.

One man who never waivered though was the great Bernard Brogan. The only true believer in the group stuck to his principle to the very end. Maybe that was way Jim Gavin would never play him in latter years. 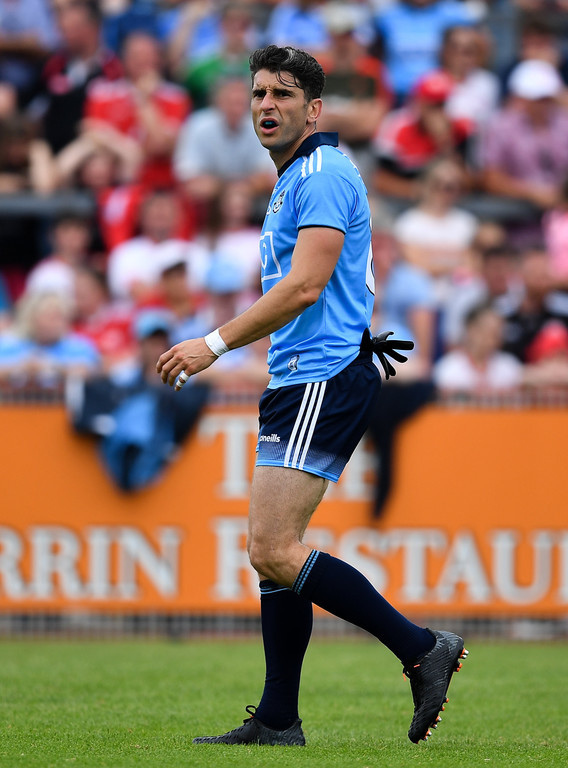 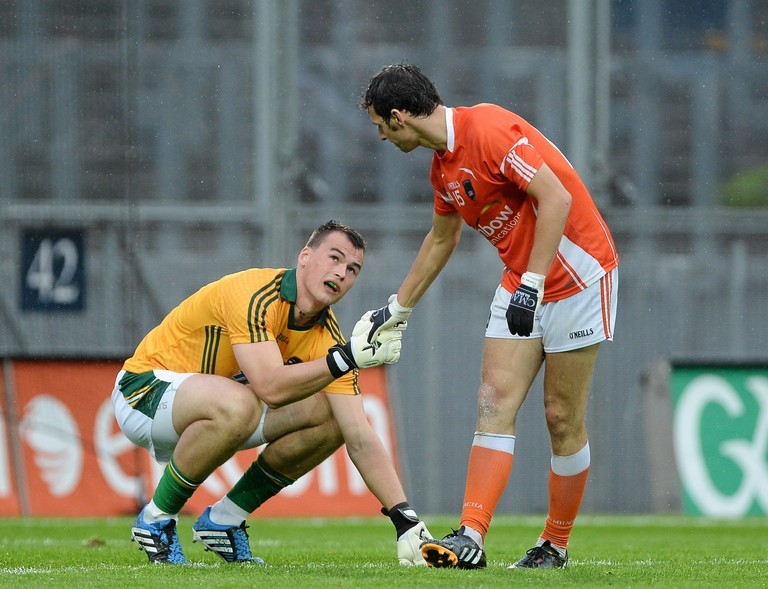 Another sign of our collapsing society is the shocking move by Armagh's Jamie Clarke to wear short socks in recent years.

Armagh would not be considered to be classic sock-wearers given their role in pioneering the blanket defence in the early 2000s.

Later defensive teams have not been fond of it. In Donegal, every player seems to have been purged of their socks-up wearing instincts.

In Armagh, Jamie Clarke stood proudly for the sock-up communuty for many years, reflecting his enegmatic, one-of-a-kind style. Alas, conformity comes to us all eventually. 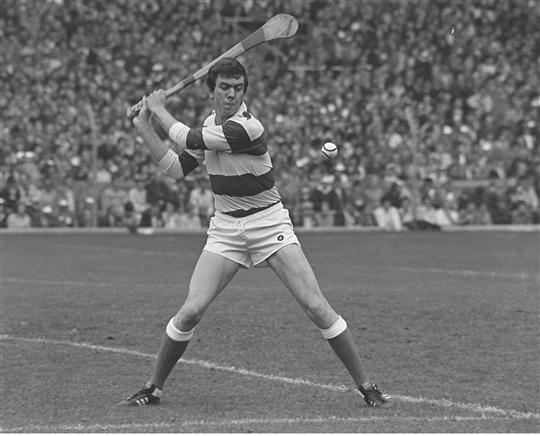 Cork hurling people are big on tradition given their own long tradition of beating teams and modern Cork goalkeepers understand early that their role entails rocking the socks-up look. 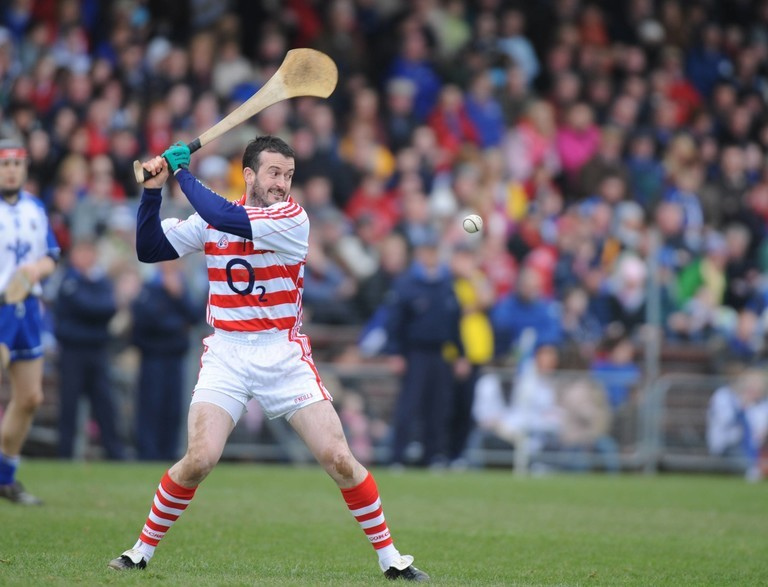 Ger Cunningham was doing back when it wasn't the done thing in the 1980s and 90s. This tradition was continued by his successor Donal Óg Cusack.

Anthony Nash, who waited a long time in the wings for Donal Óg to shuffle off, stayed true to the tradition for a long time. Unfortunately, Nash has recently gone the way of so many others and largely abandoned the look. To his credit, he does keep it in his locker for certain occasions, like the Musnter Championship clash with Clare last year. 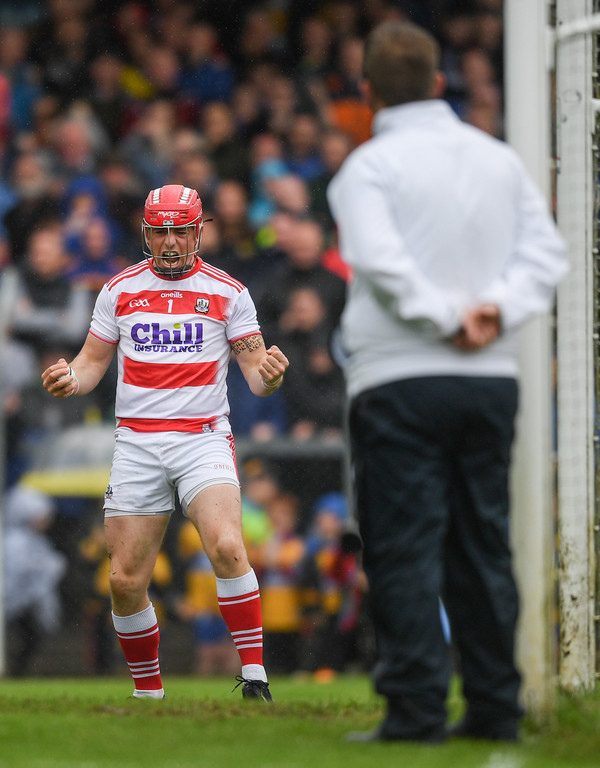 A full forward who has the gait of a centre-forward, Moran follows Ciaran McDonald in his absolute devotion to the socks-up style.

Another who has adopted the socks-up style as he has grown in experience and stature. 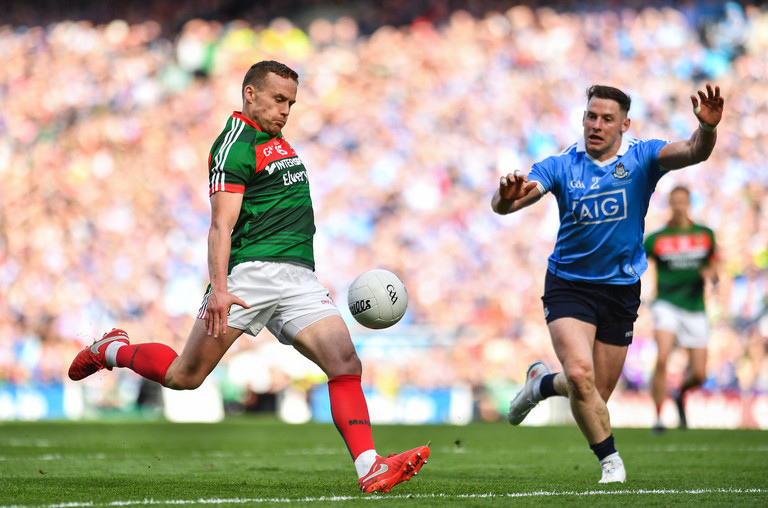 The great Kerry team of the late 2000s could always rely on the hooped socks being on proud display in the forward line. In recent years, only David Moran has truly kept up the mantle from the unusual position of midfield.

Cooper, like Joyce, was a classic case of adopting the socks-up style when one is moved into the centre-forward position. 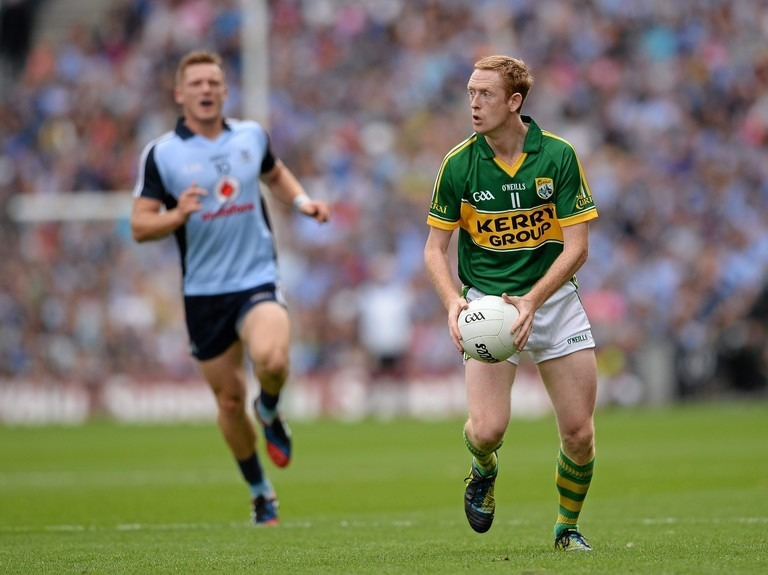 Donaghy is perhaps unusual is donning the socks-up look while operating in a traditional target man role... 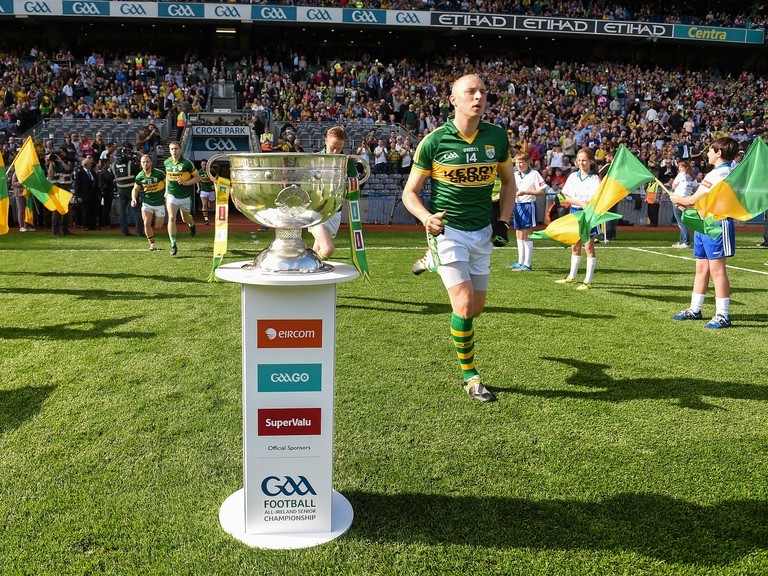 David Moran, however, remains the ultimate outlier. He is known as one of the finest ball winning midfielders of his generation. This is not typically an arena in which socks-up wearers thrive. Perhaps Moran's classy point scoring belies his midfield role and creates a special set of circumstances in this case. 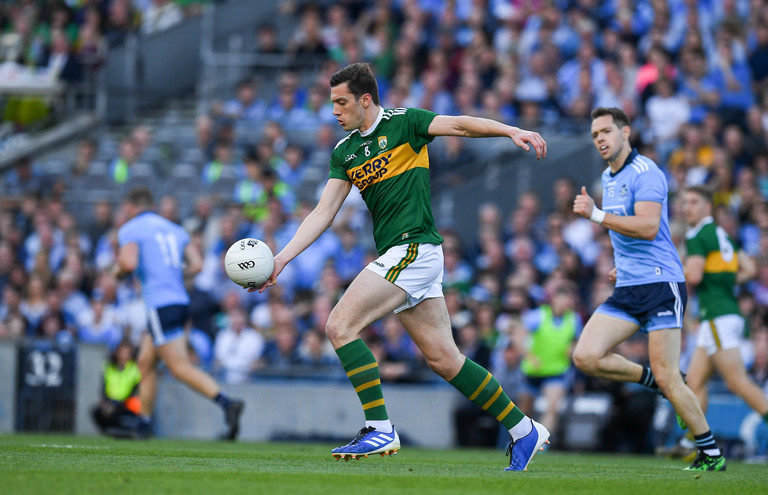 The height of TJ's socks has always reflected the importance of his role in the Kilkenny team. A young buck trying to break into Brian Cody's system, the Ballyhale man was a socks down man, intent on not looking too big for his boots. By 2012, the sock snuck up the leg somewhat to the half way point, showing a man confident in his talents, but not yet ready to show his confidence to the world.

By 2015, TJ was the main man in Kilkenny and wasn't afraid to show it. 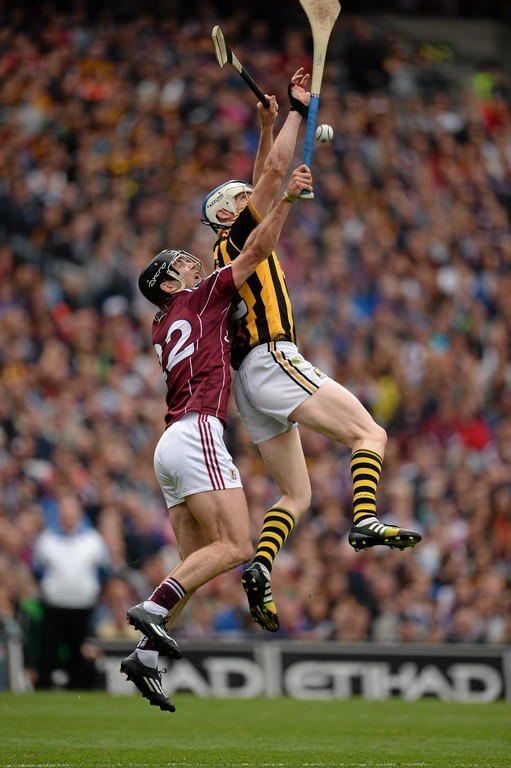 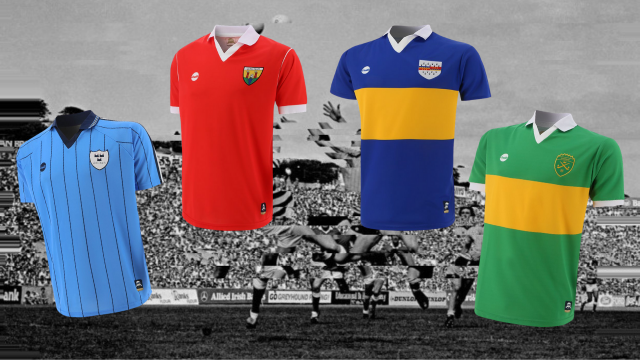