Ranking The 7 Dublin-Mayo Championship Games Since 2012

Dublin and Mayo have met seven times in the Championship since Mayo beat Dublin in 2012 All-Ireland semi-final. Dublin have won five of those games, with the other two finishing in draws.

From the results alone, you wouldn't think it, but it was the rivalry that defined Gaelic football in the last decade. The matchups have produced some excellent games. Dublin have always found some way to come out on top, whether it's through the curse of the Gods, or through playing some excellent, attacking football. Given the points differential of the seven games (2.71 - and the fact that includes two huge outliers in 2015 and last year), Mayo have been incredibly unfortunate to not win some of these games.

We've gone back through all of the games - not an arduous task - to rank them in order of entertainment value and quality. 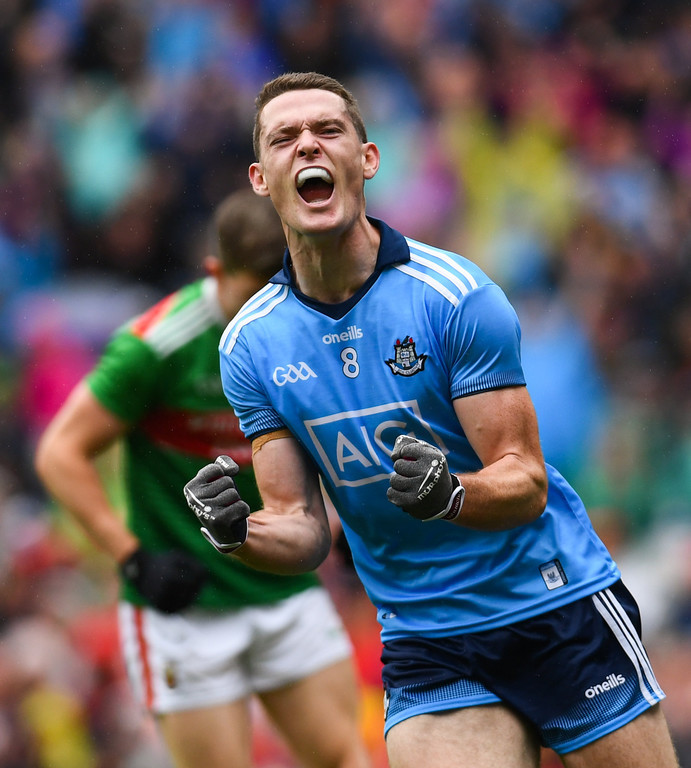 The most one-sided of the games between the two counties on the final scoreboard, but this was an epic tussle for 46 minutes. The 2019 All-Ireland semi-final really was a game of two halves. It's probably doing this game a disservice to have it so far down the list, although the second half was a real damp squib.

The first half was a thriller on the other hand and Mayo arguably should have been further in-front at the interval. Trailing by 0-8 to 0-6 at half-time, Dublin completely steam-rolled their opponents in the second half, with two Con O'Callaghan goals effectively ending the game as a contest by the 46th minute.

People thought this might be the end of Mayo - they're back in another All-Ireland final a year later.

Dublin trailed by two points at the interval. The lead by 2-12 to 0-8 after 47 minutes. King Con's two goals brought the hammer down on Mayo as Dublin found another level.

Dublin destroyed the Mayo kick-out in that period, and they killed the game.

The first half was absolutely savage stuff from Mayo. The Dubs were rattled. The 5-in-a-row was hanging by a thread. And just as Mayo fans  were starting to believe...

Not a classic All-Ireland final, but certainly not terrible either. Bernard Brogan delivered a talisman's performance for Dublin. The bookies could hardly separate the sides beforehand. For three successive years, Mayo had knocked out the reigning All-Ireland champions, but they could not get over the line on any occasion.

Bernard Brogan scored 2-3 and won the All-Ireland for Dublin. Nothing more needs to be said.

James Horan did not hold back after the game, speaking about Dublin fouling, as Jim Gavin had been quoted as saying "not only were we playing Mayo but we were playing the referee as well”.

Gavin had spoke before the game about a zero tolerance for cynicism in his squad and James Horan responded with “I know Jim made another interesting comment, that he’d walk away if his team were cynical so maybe that’s another comment Jim should look at."

The final minutes of the game were marred by cynical Dublin tackling. However, Cillian O'Connor had a chance to go for goal in the 74th minute, having been told there was still time to win possession. He went for a point and Mayo lost. 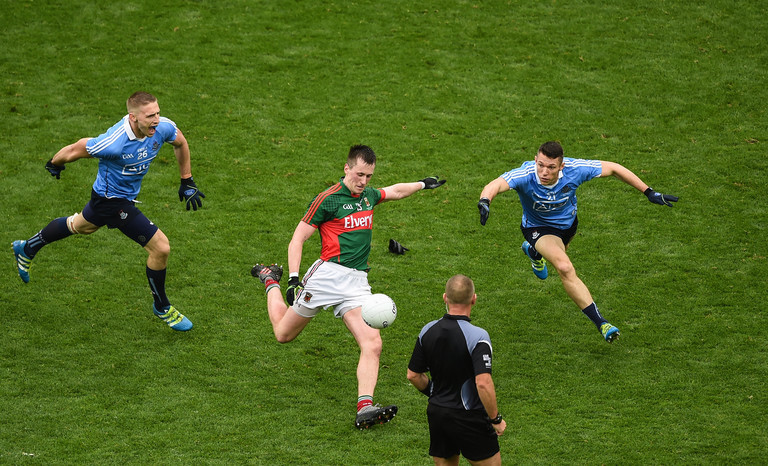 This game will be remembered for one reason - the day Mayo scored two own goals. Has that ever happened anywhere else in GAA history? A lot of people genuinely believed Mayo were cursed after this!

A Dublin player did not score for first half hour, yet they were still two points up at halftime. And somehow, throughout it all, Mayo still fought back to secure an incredible draw.

Kevin McLoughlin and Colm Boyle both scored own goals, which is unfortunately what this final will be remembered for.

Cillian O'Connor showed serious nerve to score from 40 metres in the 78th minute and force a replay. A truly great footballer.

None of this was ever seen on the TV, but John Casey's description of the 'skelping' before the match really set the tone, and it set the tone for the media chatter around the replay.

This All-Ireland semi-final replay ended the short-lived Holmes and Connelly reign over Mayo.  Mayo lead by four points in the 53rd minute and ended up losing by seven. A brilliant defensive performance turned into an outright calamity.

Diarmuid Connolly's availability dominated the discussion right up until throw-in. This was a good, entertaining match that started Dublin on the road to five-in-a-row

Andy Moran had just found the net in the 43rd minute and Lee Keegan had a chance after that would have put Mayo five points up. He didn't take it and Dublin began to dominate. 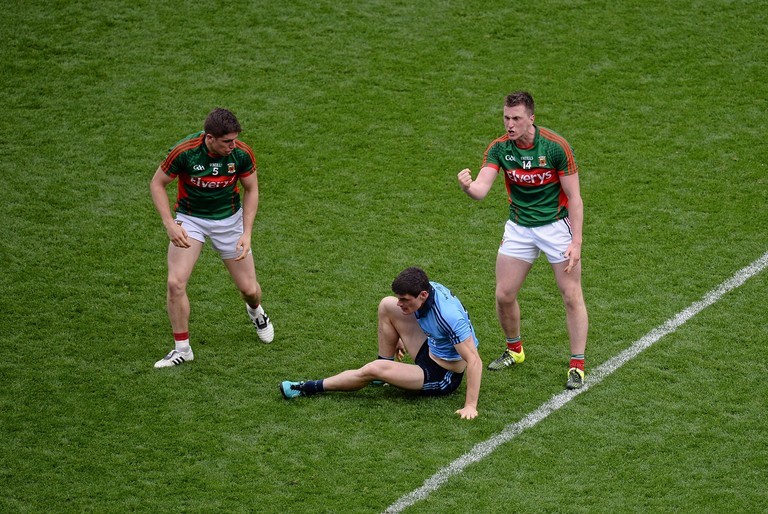 The drawn All-Ireland Semi-Final in 2015 was one of the most frenetic, and chippiest, games the two counties would ever play. The match was marred by indiscipline and cynicism, though Dublin seem home and hosed, up seven points clear late on. Mayo did not give in, and from the 67th minute onwards, scored 1-4 without reply, and a late Cillian O'Connor penalty forced a replay.

Mayo are incredible competitors and rarely die without a fight. Trailing by 2-12 to 0-11, they forced a draw. Croker was rocking from a comeback that had everyone inside thinking about 2006

Diarmuid Connolly was shown a straight red card in stoppage time. He seemed certain to miss replay, but was cleared at the last minute. 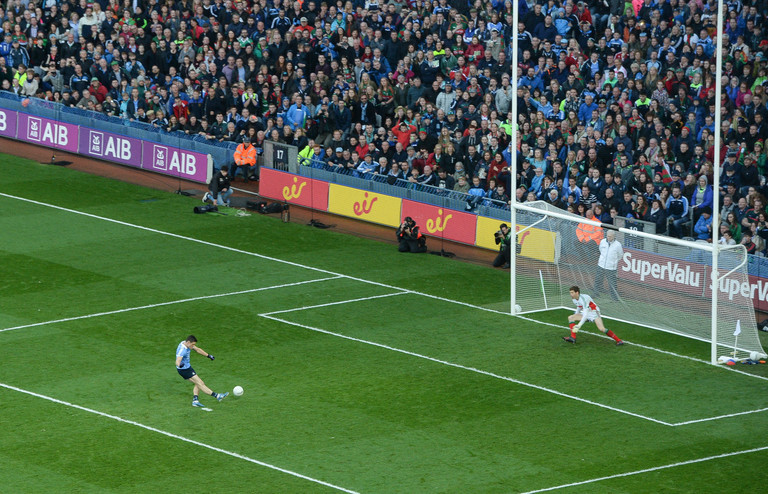 This All-Ireland final replay was even more dramatic than the drawn game. Stephen Rochford made a big decision in dropping goalkeeper David Clarke and bringing in Rob Hennelly for the game. It did not work out at all, as Hennelly did not play well and was shown a black card in the 41st minute. Diarmuid Connolly converted the subsequent penalty.

One point ended up being the final margin, as a late free from Cillian O'Connor went wide and Dublin won their second successive All-Ireland.  O'Connor had scored nine other frees over the course of the game and had also scored the point the first day that forced a replay.

The screw-up that spawned some famous Joe Brolly columns.

Mayo's change of keeper has cost them about 1-3 and the black card of their best defender. Very tough situation for Hennelly to come into

The height of Mayo agony, or so we thought. 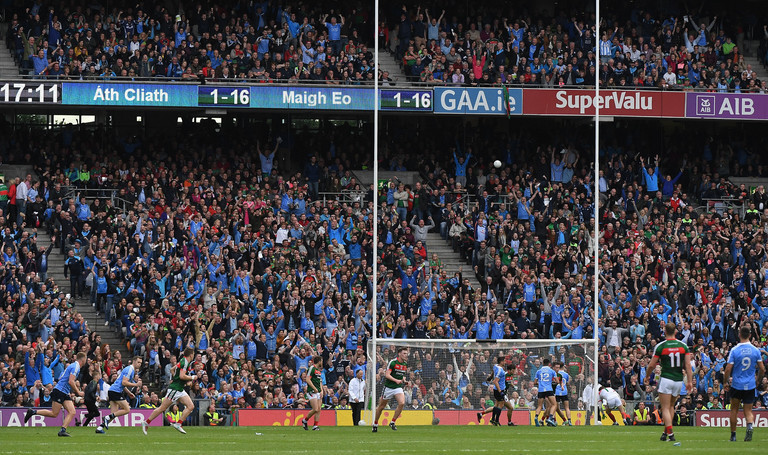 This was a thrilling game of football. It had everything from the first minute to the last, and was one of the greatest games ever played. Dublin were put to the pin of their collar and were very nearly caught out.

It looked like it could be a one-sided affair when Con O'Callaghan found the net for Dublin in the second minute, though Mayo had built up a one point lead by the interval.

John Small and Donal Vaughan were both dismissed in the second half and Lee Keegan's 54th minute goal put Mayo in the driving seat.

Dublin held their nerve in the final quarter however and a late free from Dean Rock saw them claim a third successive All-Ireland.

Satellite saga towards the end:

Dean Rock slotted a free to seal the three in a row, though there was controversy towards the end as Lee Keegan appeared to throw a GPS tracker in his direction as he struck the free.

Mayo seemed to be in control until Donal Vaughan was sent off on a straight red card for a late charge on John Small who had just taken out Colm Boyle. Small would walk for a second yellow, Vaughan received a needless red. It was a sliding doors moment for Mayo. Dublin kicked on and won the game.

Mayo and Dublin have produced classic games of all different types. The one common denominator of all seven games is that Mayo are not on the winning side. James Horan, and all the fanatical Mayo fans in the county and beyond, would love that to have changed by Saturday evening. If it does, it will be hard to imagine Dublin going down easily. You would imagine a Mayo win would catapult the 2020 meeting to the top of the list.

SEE ALSO: The Birth Of A 24 Year Saga - Mayo's Thrilling But Doomed All-Ireland Bid In 1996 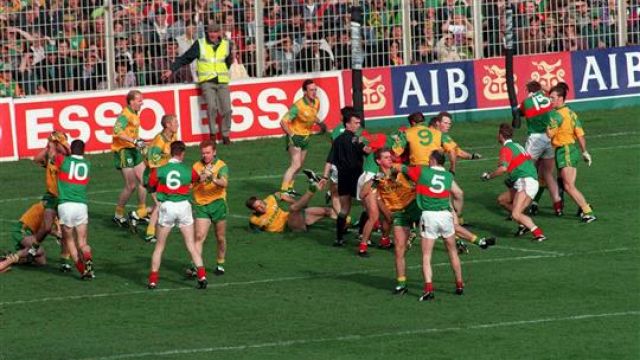 GAA
2 months ago
By Balls Team
Watch: Philly McMahon And Keith Higgins Involved In Tunnel Fracas
GAA
2 months ago
By Sean Meehan
'You've No Right To Win It Now Just Because You're There'
GAA
1 year ago
By Maurice Brosnan
Meath Captain Hits Out At Local Credit Union Over Dublin Celebration Post
Popular on Balls
GAA
17 hours ago
By PJ Browne
'I Have Pictures Of Stephen Cluxton All Around My House, It’s A Bit Weird!'
Rugby
18 hours ago
By Balls Team
Son Of Offaly Hurling Legend Set For Super Rugby Debut
The Rewind
16 hours ago
By Sean Meehan
Introducing The Vote For Ireland's Greatest Singalong Song
Rugby
14 hours ago
By Eoin Harrington
Rob Kearney Player Mic Gives Great Insight On Western Force Debut