'When You're Taking A Picture Like That, There's Kind Of A Radiation'

Ray McManus thinks he's developed a reputation, among his fellow photographers at least, for being the one with an eye for the melancholy scene. He gets slagged about it.

There's an angle on this: Now nearly 40 years into his sports photography career, the man who founded Sportsfile isn't as sprightly as he used to be; no longer can he dart about a pitch in pursuit a victorious young footballer or hurler, today he's the sniper with the long lens rather than infantry on the field.

Consider also that without the hurt, you cannot have the joy. For many, the pain comes first. They'll experience it once and not want to feel it again; the agony of defeat can be the catalyst for victory. McManus is there to catalogue that moment.

2020 has been a year filled with uncertainty, one in which it appeared there might not be any action on the pitch. AIB and Sportsfile have teamed up to create a picture book, The Toughest Season, which will capture the resilience of GAA communities this year.

They are looking for people nationwide to contribute pictures of their own club and community from the past few months. There are no strict criteria for inclusion other than images should reflect the special place occupied by Gaelic Games in Irish society. People can enter by using the hashtag #TheToughest on social media or through the form at the bottom of this article.

We asked Ray McManus, one of Ireland's best sports photographers, about some of the images Sportsfile has taken down the years which reflect how much hurling and football mean to people. 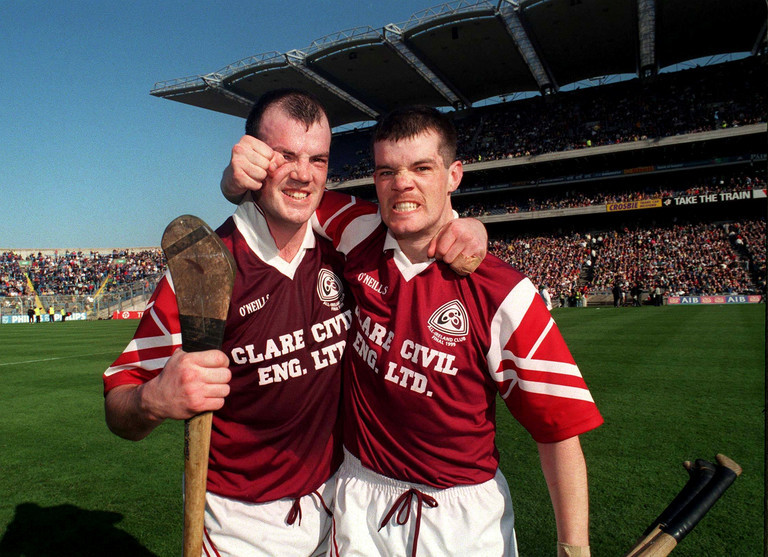 "If you look at the the clenched fist and teeth on Greg, they are saying, 'Ya boyo, we won it'. To me, there is a massive joy in the Joe Kernan one and the Bakers . The three of them are big men; ultimately, they are nearly going back to childhood with the whole joy of the win.

"The buzz I get... I'd feel their win, when you're taking a picture like that, there's a kind of a radiation, something that says 'This is big time'. It's just massive joy, the hairs would stand on the back of your head. You do get involved in all that." 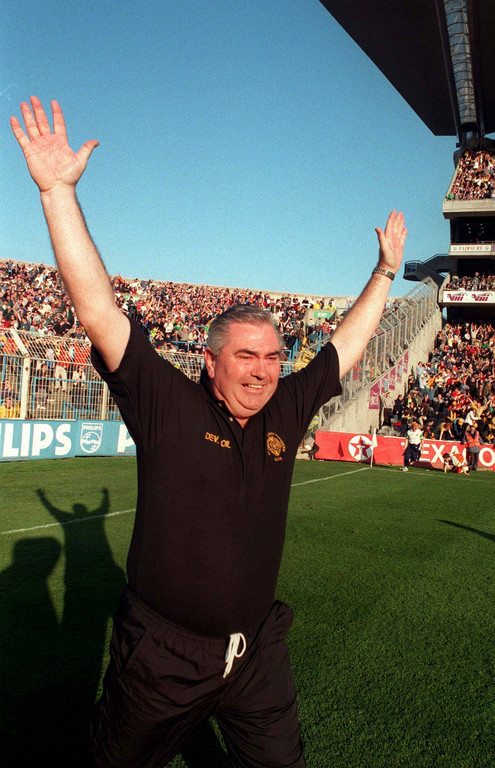 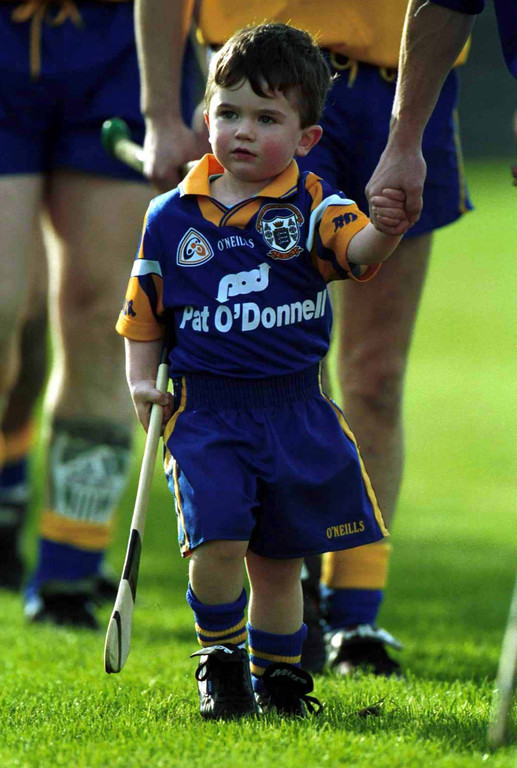 24 October 1999; Two-year-old Colm Fitzgerald holds the hand of his father, the Sixmilebridge goalkeeper David Fitzgerald, in the pre-match parade before the Clare SHC final match against St Joseph's Doora Barefield at at Hennessy Park, Miltown Malbay. Photo by Damien Eagers/Sportsfile

"It's just a simple little picture. There's that young fella. I know his granddad, Pat Fitzgerald. I know he particularly liked it because I ended up getting a few prints made for him. 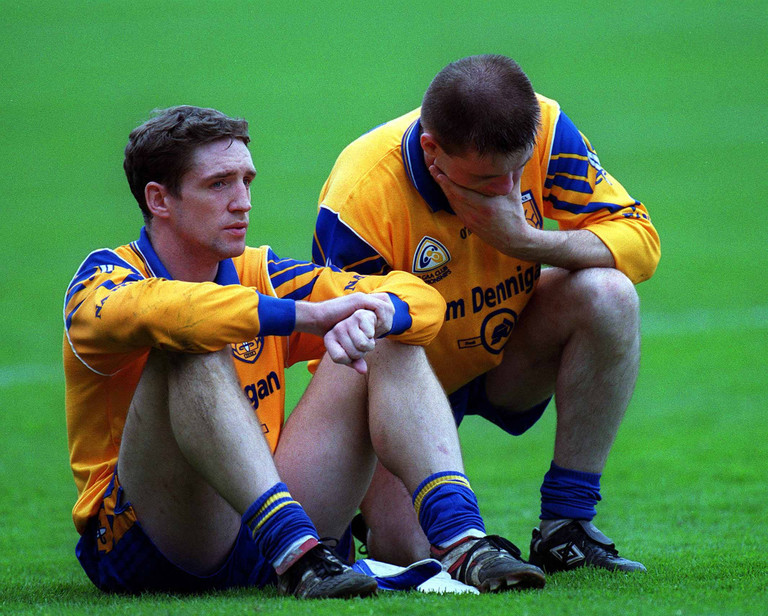 "Next month, the two of them will be on the sideline [with Armagh and Dublin], arguing the toss, trying to win it for their home county. There they are [20 years ago], teammates, literally down and out. 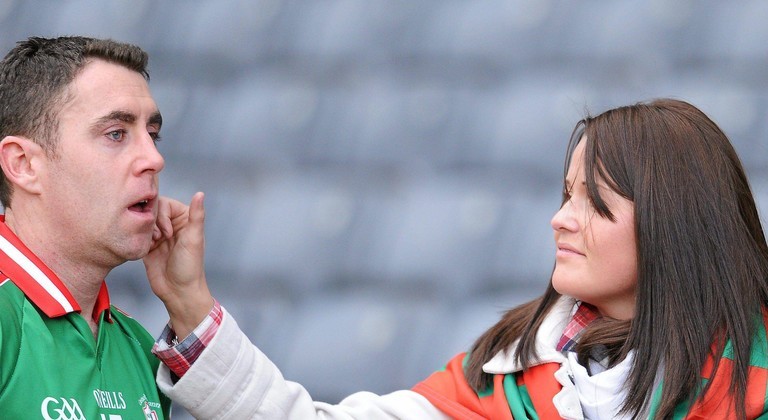 "I've obviously just grabbed that shot because from a technical point of view, it's not brilliant in that I don't have all of his head in. But if you only get one chance of getting a shot, then you just get one chance.

"A lot of times that wouldn't be considered up to the mark. But then, to me, the shot is kind of good enough in that you have his wife just wiping away the tears, like it's kind of... It's reality."

"Everyone of them is really, really happy. I can give you action shots ten a penny from matches because that's my bread and butter but there's great joy in that photograph. 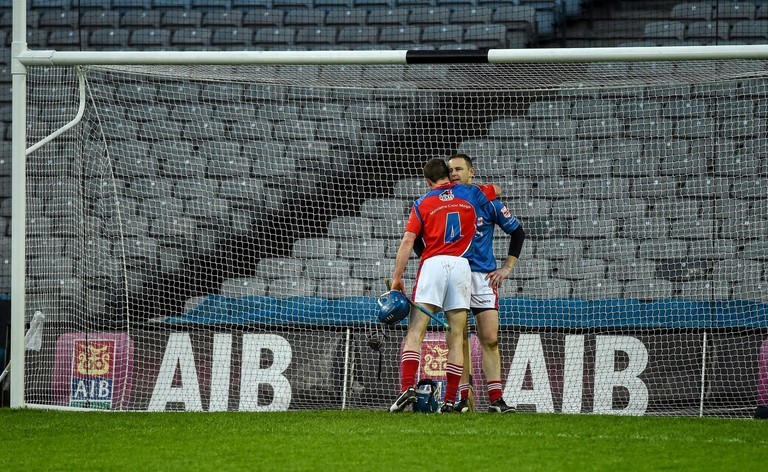 "Neither of them want to be in that position. There are two teammates and obviously one of them just decides, 'I'll comfort your man here. He looks worse off than me'.

"That to me is about comradeship."

The Gooch gets his day 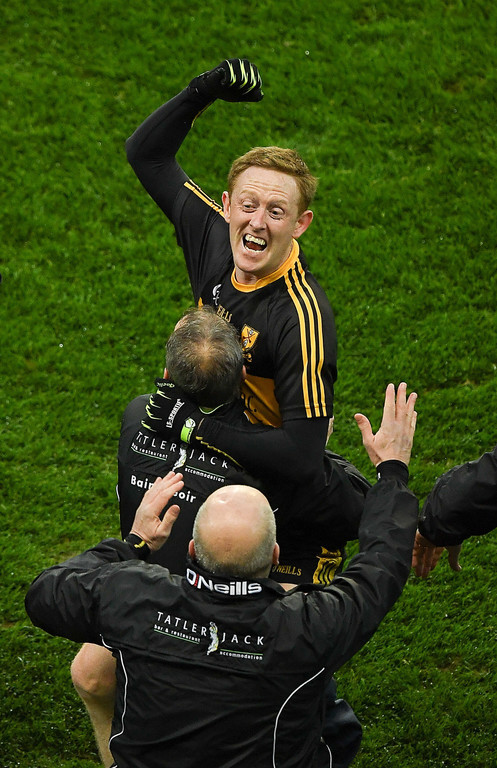 "Colm Cooper was the story that day. He hadn't won a [an All-Ireland club] medal yet.

"I don't profess it to be a brilliant picture, but I was in the stand that day and it was all about making sure you got him at the end. That's within the second or two of the final whistle. And then in another second or two, it's gone. It's all captured in his face there.

"I'm above in the upper deck, in the Hogan Stand, and you're shooting down and you're saying, 'What is he going to do?'" 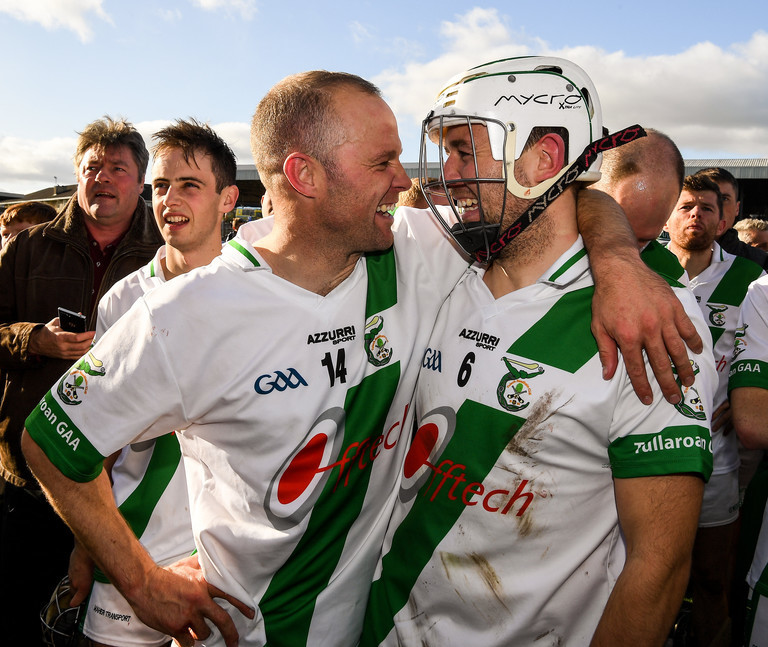 "I can tell you that Tommy was in some form that day. Tommy is a great character but all he was interested in was winning that medal.

"There he is with his brother Padraig. He is in the grassroots. He's in the Kilkenny stadium. He's really at home. He's 36 or so and he's just won his first intermediate medal, a man with all these [All-Ireland] medals and the thing he most wanted was a championship medal [with Tullaroan].

"I'm standing within three feet at the time, you know, and he has such a nice way about him. He's talking to me, he's saying, 'How are you, Ray?'

"It's good that they know you, but we have a company policy. We don't go around high-fiving people." 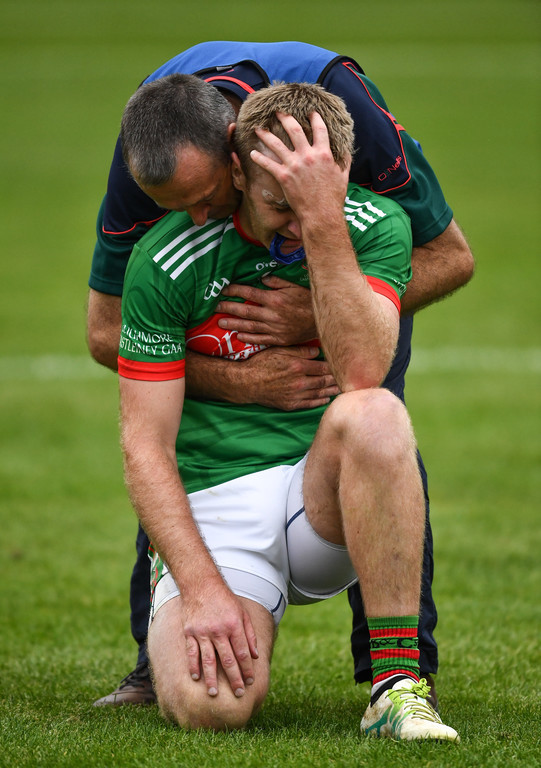 "This is Noel McGrath, two weeks in a row he's after losing a county final. And his uncle is the team manager.

"This one is clean. There's nothing else in it. This is a picture where you need to stand up. So I'm standing up tall and really standing on my toes there so that I can get an absolutely clean background. There's no distraction.

"To me, even though it's only a two-week-old picture, that's one of my favourite pictures. That would be zooming up there into one of my all time favourites in the sense that to think that your uncle is coming over and he puts his arm around you and saying, 'Come on, buddy. Forget about it'."

How to Enter Your Photo For 'The Toughest Season'

Entries are now open for 'The Toughest Season' picture book, which will document the 2020 season with Gaelic Games photos from around the country, alongside those from Sportsfile. You can enter any photo you think is worthy of a place in the book. One entrant will also win a €1,000 voucher for their club.

See Also: Calling All GAA Supporters - Help Us Document The Toughest Season In History With AIB 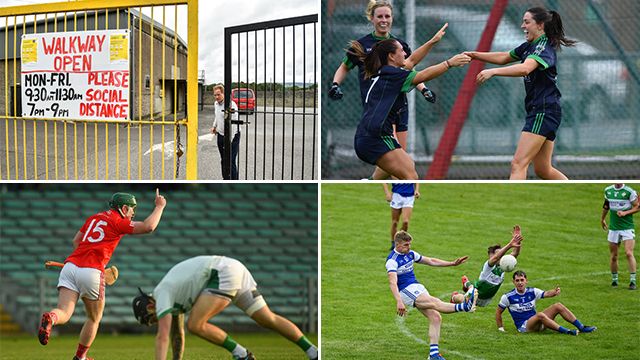 GAA
18 hours ago
By Donny Mahoney
'Will We Go Back To The Way It Was When I Was Playing? Will It Go Back To That Rawness?'
GAA
2 days ago
By PJ Browne
Jim McGuinness Quietly Helped Louth Team Win County Championship
GAA
2 days ago
By PJ Browne
'You Know In The Dressing-Room Or Training That Something Is Happening Here'
Popular on Balls
The Rewind
11 hours ago
By Mark Farrelly
Quiz: Guess The Teenage Disco Song From The Music Video Screenshot
2