Remembering The Great Sligo IT Team Of The Early Noughties

The Electric Ireland Sigerson, Fitzgibbon and Higher Education Championships are unlike club and county Championships. Team composition is determined by place of learning not place of birth allowing traditional rivals to form the most unexpected of alliances. The Sligo IT team, full of future Mayo and Donegal stars, captured this spirit beautifully.

Amidst the pantheon of great Sigerson teams, the Sligo IT side from the turn of the century stands out. Victorious in 2002, 2004 and 2005; the small institute are the last side to win the competition back-to-back.

Just a short list of some of the individuals who featured at some point over those three years is incredible. Paul Durkin, Ger Cafferkey, Karl Lacey, Rory Gallagher, Keith Higgins, Kevin Cassidy, Christy Toye, Michael Moyles and two individuals who would go on to dominate the inter-county game, albeit at different sides of the field; Donegal's Eamon McGee and Mayo's Andy Moran.

McGee's Donegal denied Mayo an All-Ireland title in 2012. In 2015, both McGee and Moran lined out in the All-Ireland quarter-final as Mayo extracted revenge.Yet they didn't always line-out against eachother, they are connected by Sigerson success. 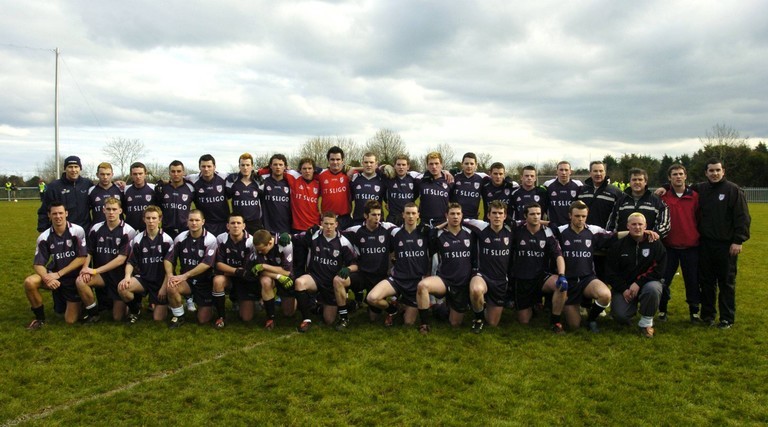 Anyone who has watched the Electric Ireland Sigerson, Fitzgibbon and Higher Education Championships is already aware of the license this tournament provides to players. Devoid of overbearing structures, marrying those from so-called weaker counties with high-profile stars and pitting them against each other in a highly competitive and accessible tournament.

The quixotic joys of college intertwine with the pleasure of competitive team sport. For Eamon McGee, the balance tipped just slightly in the favour of the sport.

For me, it wasn’t a case of what to do (in Sligo IT.) They were competitive in Sigerson at the time it was more 'what kind of course can I get into that half suits me?' I think a lot of boys were the same. It wasn't just education reasons, they just had a good Sigerson team! I ended up living with Christy Toye and Kevin Cassidy. It was a great time, such good craic. A lot of those evenings was spent wondering what would happen if we won something for Donegal, just talking and dreaming really. It was a football house and it was all we talked about.

It is a bond that exists still today.

There is definitely a connection, I mean we spent a lot of time together, we partied together! We all hung out, at their apartment or house. There's definitely a bond there now. We were so close at the time, we’ll always have that. It's something I’ll always appreciate. 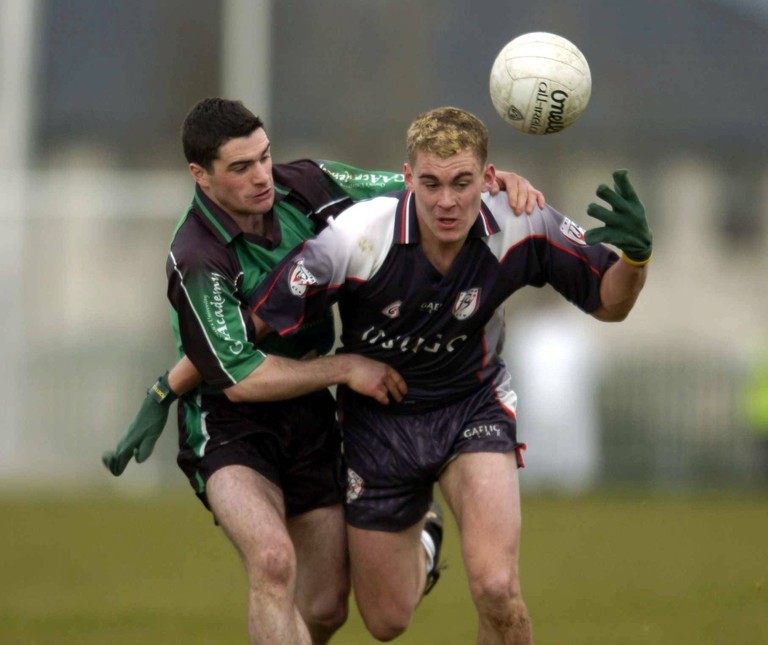 Developing Donegal footballers had been cutting their teeth with Sligo IT in the years previous to McGee. In 2002, Martin McHugh coached the side to their first ever Sigerson Cup win. They beat UCC in the final, with Rory Gallagher driving them forward as he landed a third of Sligo IT's total scores. The final score was 0-6 to 0-5.

McGee was a half-back on the 2005 winning team, and while his initial inter-county career was a mixed affair, his form in this tournament was outstanding. An up-and-coming Brian Mallon featured in the opposing half-forward line, but McGee shone nevertheless.

There was less pressure, I could express myself a wee bit more. Sometimes at intercounty, it can be that wee bit claustrophobic, the pressures on with bigger crowds. It can be like that. I've just noticed players played really well at that level but when it came to county because of pressure they couldn't kick on.

Go to any game now and there will no doubt be old bucks nudging themselves giddy at the prospect of one star operator togging out at inter-county level in a few years. It has always been this way, but inexplicably many Sigerson stars fail to make the jump. It is a phenonium McGee is fascinated by.

I couldn't understand it, there were a few Mayo players definitely, I couldn’t connect the dots why they hadn’t made it. Training week in, week out with them and saying 'this man is definitely good enough for intercounty football' and then he got a chance in the squad and they just never kicked on. The reality is that in my opinion, it is the pressure. It's more regimental, you've to get in your gym session, bigger crowds. That wee bit more competitive.

Both Moran and McGee were central to the back-to-back success. For McGee, they were two distinctly different experiences.

We won the first Sigerson in terms of pure ability. We had a team that would rival a lot of inter-county teams. We had Monaghan players, Donegal players, Sligo players, Mayo players, Roscommon players. The second team we won it, I think 2005 or 2006. The team’s ability was way below what we had played with previously, but in terms of that bond we had, it was incredible. Something I'll never forget.

We would be pulling up to Sigerson games singing away. Once, we were playing Queens and they were making their way to the dressing room. They heard this bus coming and they looked back and saw this load in full song. They were thinking this must be the supporter bus!

Last season's Footballer of the Year, Andy Moran, has one standout memory of the large Donegal contingent he shared a dressing room with back in those days.

they liked to have a bit of craic! 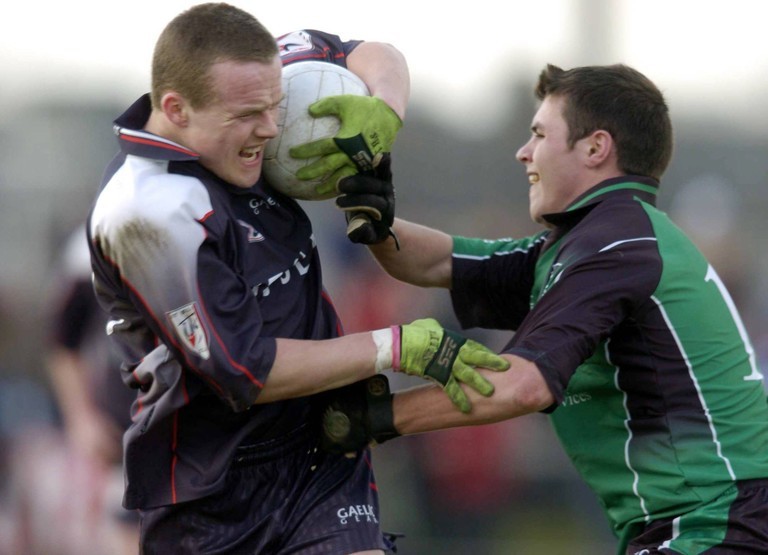 Moran claims he didn't have the same thirst for partying in those days, but speaks dearly about the bond he has with his former team-mates from the O'Donnell County.

Basically, the team was made mostly of us. Not entirely, we had the likes of Rory O’Connor, Padraic O’Connor from Roscommon and Paul Fennelly from Monaghan, but the majority of the team was Mayo and Donegal players. The relationship between those players to this day is still very strong. Eamon McGee at that time was a really talented footballer, Neil (McGee) played fullback for us on that first team, Karl Lacey all these guys- they liked to have a bit of craic! They were really good additions and great lads to know.

Moran is definitive in his take on the value of the Electric Ireland Sigerson, Fitzgibbon and Higher Education Championships.

For guys like myself who went in 2003 and got to see the likes of Kevin Cassidy, Paul Fennelly, Christy Toye, seeing them play football gave me an insight into what was needed to play county football. To me, Sigerson is such a great tournament. For guys trying to break into a county team and needing an outlook of how to develop yourself, I think it’s the biggest education going.

It’s a higher level of football. Playing for Mayo, Donegal or Monaghan is the pinnacle of people's career but you took a step when you're playing for Sligo IT. At that time in Sligo, there was a lot of pressure to perform well. Before I went we won a Sigerson and then we won a few more. There was a lot of pressure at the time to perform. What Eamon is on about is true, the enjoyment factor was there. The enjoyment we got out of it more than anything, we were a small college playing against UCCs, UCDs, DCU and the fact we could compete was a testament to our coaches.

The post-college shift is an accustomed tale for any graduate. The burst into employment ensures gradually friends and team-mates drift apart. But Eamon and Andy can chart a distinct overlap in their football careers and a persistent reference point that will always exist as a happy memory.

Once you meet those guys, its kind of like being back in Sligo IT again. I think all of us have an affiliation to the college to this day, we were very lucky to have a good group, with good managers at the time. Kieran Gallagher, Dennis Johnson, these guys. They allowed the craic as well. It’s important too. It was a great time and one I look back on with fond memories really.

Something Eamon is in absolute agreement with.

It was good, good times. We were thinking we’d be best friends forever. But life goes on and we part ways. Once I get to chat with Andy, it comes back. I still meet a few lads, I met Mark Breheny there for the sleepout for the homelessness and we still had that bond. We could just chat away after meeting. As if it was only last week we parted ways.

GAA
1 month ago
By Jonathan Browne
Calls For Disciplinary 'Consistency' After Schmozzle At End Of Donegal-Armagh Game
GAA
2 months ago
By Jonathan Browne
How To Watch Donegal Vs Tyrone This Satuday
GAA
9 months ago
By Gary Connaughton
Rory Gallagher Gives Insight Into Why He Fell Out With Jim McGuinness
Popular on Balls
Football
11 hours ago
By Luke Delaney
Obafemi In As Stephen Kenny Names 27-Man Nations League Squad
GAA
1 day ago
By PJ Browne
How A Kerry Guard Ended Up Playing For The Tipperary Footballers
Football
9 hours ago
By PJ Browne
Five Things Learned From Stephen Kenny's Nations League Press Conference
Motorsport
1 day ago
By Eoin Harrington
F1: New Team Radio Clips Show Sergio Perez Frustration With Team Orders In Barcelona