Remembering The Strangest Football Championship Of The 21st Century

On the 5th of April last year, Down beat Laois by three points in a National League game in Newry and they haven't won since.

As it can be so often, promotion to Division 1 proved a curse in disguise as Down weren't able for that level and shipped hammering after hammering. Morale would seem to be low at this point.

One is wary about pronouncing any result as marking the 'rock bottom' - calling rock bottom is, ironically, a rather optimistic thing to do - but really, Down have little room left for disimprovement at this point.

But the events of the past year have only deepened one particular mystery - what the hell happened in the 2010 All-Ireland championship?

As in the hurling championship in 2013, in the summer of 2010 the sport of Gaelic football seemed to go on some mad hallucinogenic, one which produced highly bizarre results.

THE DUBS SEASON OF RENEWAL 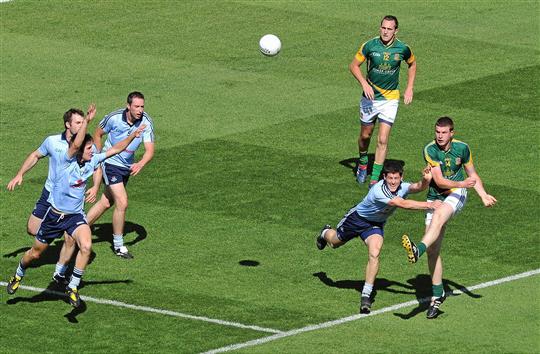 It is only year out of the past eleven that Dublin didn't win the Leinster championship. It may well go down as the last year in history that this happened.

The humiliation in the 2009 All-Ireland quarter-final was a watershed. Notwithstanding their five straight Leinster titles, it was decided that it was root and branch reform time.

Pat Gilroy flipped open the bonnet and sought to comprehensively rewire the Dublin engine, with the immediate result that the vehicle was barely roadworthy by the beginning of the championship.

Yes, many forget it now but Dublin entered a short but rather violent period of transition in the early summer of 2010. Most remember an apparently resurgent Meath banging in five goals in the Leinster semi-final - a game which made a mockery of their pretensions towards greater defensive solidity - but an even more dramatic illustration of the Dubs' early struggles is the first round game against Wexford, where the scoreline stood at 0-10 to 0-3 with twenty minutes left. The Dubs rallied to force extra-time and thereafter ran riot.

Gilroy's job was on the line in the qualifiers. A nervy win over Tipp was followed by a nourishing victory over Armagh, the first inkling that the radical surgery was yielding positive results. The win over Tyrone in the quarters offered the final proof that the Dubs were back as a serious force. In the end, they were unlucky they didn't win an All-Ireland that year, their discipline costing them late in the day against Cork in the semi-final. 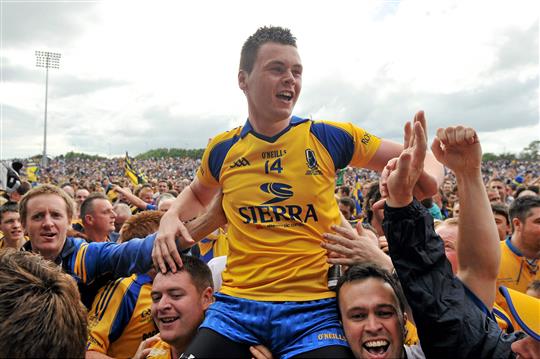 Out west, Sligo achieved the singular feat of beating both Mayo and Galway and failing to win Connacht.

Mayo had reached the League Final and appeared to have everything in place. However, they were beaten comfortably in Markiewicz Park and made disconsolately for the qualifiers.

Fortunately, they got a gimme of a draw down in Longford, who that year had finished third from bottom in Division 4 of the League, ahead of London and Kilkenny. Glenn Ryan's reign was dribbling to a conclusion and defeat to Mayo would have seen him bundled out the door with some alacrity.

However, on a blazingly sunny Saturday evening in late June, Pearse Park earned its fortress prefix as Longford stunned Mayo by a point thanks to a late-ish Paul Kelly goal.

John O'Mahony's mysteriously abject second spell as Mayo manager came to a fitting end. He informed the media of his resignation outside the dressing rooms in Pearse Park. His long yearned for return had yielded only one Connacht title in four years. The lesson here is that you should never go back, and if you must, don't do so while simultaneously breaking your bollocks as a rural TD.

Sligo proceeded to beat Joe Kernan's Galway after a replay in the Connacht semi-final. They tossed away victory in the final few minutes in Salthill but won a gripping replay by a point at home.

Roscommon, meanwhile, reached the provincial decider following wins over London and Leitrim. Neither team were hammered. In the previous year's Connacht championship, Roscommon met Mayo in Castlebar. At half-time, the scoreline read Mayo 3-10 Roscommon 0-1. They finished bottom of Division 3 in the National Football League.

Hubris is not an affliction to which Sligo football supporters have traditionally been vulnerable. But they got a bad dose the week of the final.

On the Wednesday before, Darragh O'Sé warned in the Irish Times that the Rossies wouldn't fear Sligo in the same way they might Mayo or Galway and tipped the rank outsiders. But this felt a bit of a folksy argument, one that no longer carried too much weight.

However, Roscommon won a recklessly open game by a point despite a magnificent display from Sligo's Alan Costello, who hit five long range points from play in the second half.

Their spirits broken, Sligo were a ghost of themselves in their last 12 qualifier match in Newry. They were chewed up by a Down team who were gaining quiet momentum. Though they won in Salthill in 2012, Kevin Walsh's Sligo tenure would never see such heights again. 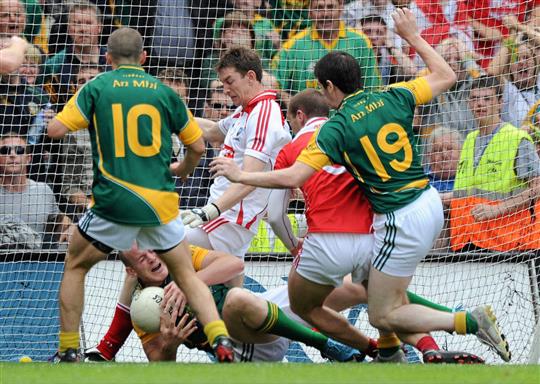 Martin Sludden has disappeared from the front rank of inter-county refereeing in recent times. Even he was to single-handedly invent a cancer cure, Louth newspapers would still place the 2010 Leinster Final at the top of his obituary.

Little needs to be said about the incident other than that Joe Sheridan's post-match declaration that his three-pointer was 'a perfect goal' remains the finest show of chutzpah ever witnessed in the bowels of Croker.

The Louth boss and current FG TD, Peter Fitzpatrick, labelled Sludden 'Dick Turpin without a mask'. Possibly the most memorable moment of the generally surreal 2010 championship. 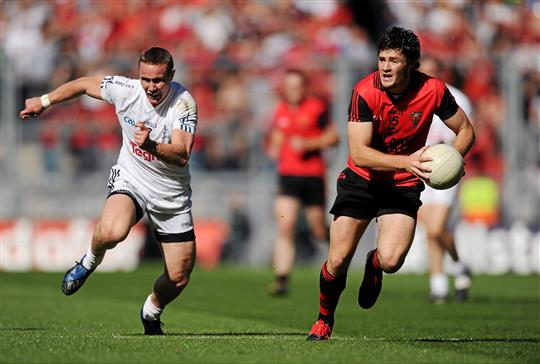 Donegal, meanwhile, were ranked 19th in the country by the reporters at the Irish News. This was seen as unexceptional at the time, perhaps just a few notches down from their natural habitat.

The country's 19th best team were pipped by Down in the Ulster quarter-final. Down fell, inevitably, to Tyrone in the provincial semi-final in Clones. The Armagh-Tyrone duopoly in Ulster was drawing to a close. For starters, Armagh were a spent force and patently headed for the wilderness.

Tyrone, though ageing, were still thought formidable and they demolished Monaghan in the Ulster Final.

In the meantime, Down began their raid through the qualifiers, initially away from the glare of the spotlight. Longford and Offaly were disposed of though the scorelines didn't look too dazzling. Home advantage against the former may have been decisive. They murdered a Sligo team who'd had the heart ripped out of them by a Connacht final loss.

The Kerry match provided delightful fodder for nostalgic types, who could revel in the factoid that Down were unbeaten by Kerry in the championship. This was deemed harmless recall with little relevance for the upcoming quarter-final.

Kerry's season was dominated by the personality of Paul Galvin, who was all the while the subject of a documentary set during that season. The reigning Footballer of the Year, he endured a more chequered year in 2010, playing great stuff in the two championship matches in which he featured. He was pivotal in rescuing a draw for Kerry in Killarney and was sprung early in the replay as Kerry won in Pairc Ui Chaoimh for the first time since '92.

However, he was foiled by action replay once more as the cameras caught him fish-hooking Eoin Cadogan in extra-time. He was banned and would miss the Munster Final and the All-Ireland quarter-final.

Down blitzed Kerry early doors. One assumed Kerry would recover but they never got sufficiently close to catch Down. In the end, it was comfortable. Enough to make one believe in curses and Indian signs and so forth. But then Down's 100% championship record against Kerry will not, we assume with some confidence, survive a meeting with them this summer.

The All-Ireland semi-finals proceeded with a single provincial finalist among the quartet. There were no unbeaten teams left in the championship. Meath were the last team to lose and even they were half-beaten in the Leinster Final. Perhaps oddest of all, it was Kildare who spanked Meath in the quarters, spiraling over points from all angles in the closing stages. The football was almost of the champagne variety as Johnny Doyle and James Kavanagh ran rings around the Meath defence.

Both Cork and Down were lucky to win their semi-finals. Cork did seem to be firing as well as they had in 2009. They rather crawled into the final, capitalising on Dublin's indiscipline and winning off the back of unerring

In the final proper, many half anticipated Down would win.

The traditionalists reveled in Down's progress asserting the value of 'tradition' at every turn, winking knowingly at the sight of their exuberance and natural confidence around Croker.

Their status as the southern purists' favourite Nordie team was copperfastened.

Down's history in All-Ireland finals was flawless. Meanwhile, that Cork team bore the scars of previous All-Ireland final defeats. It was thought they'd be a bag of nerves, trying to avoid their third final loss in four years.

Trailing by three points at half-time, the scene appeared set for more Cork frustration (Cork heartbreak has never been as indulged as Mayo heartbreak). But the Cork forwards, often maligned, stood tall in the closing stages, winning by a point 0-16 to 0-15. 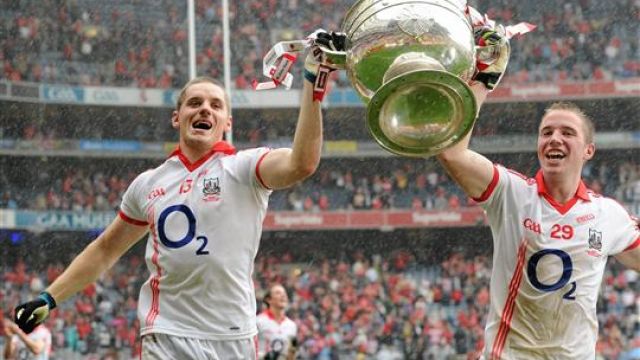 The subsequent years have made it hard to fathom what transpired in 2010.

For Down, the championship was like a mirage, a strange oasis in a dessert. If one looks closer, one would have seen the seeds lain by underage final appearances in minor and U21 in 2005. They remained reasonably competitive while James McCartan was manager but drifted further from the big-time. Now they are plumbing all time lows.

The prospect of any other county winning Leinster for the remainder of the decade looks very remote indeed. Since 2011, only six teams have won provincial titles. And no non-provincial winner has won the All-Ireland.

2010 feels like the last year the old democratic spirit reigned in Gaelic football. In the years since, a coterie of elite counties have maintained a vice grip around the latter stages of the championship.

Read more: "He Was Just Grey With Shock" - The Day Kevin McLoughlin Saved Mayo From Humiliation