"Don't tell me any more, I don't want to know," was her response.

Ambrose is on the endangered species list. She's a dual player, one of the few - and due to injuries the only in Limerick this year - who still manages to mix senior camogie and football. A David Attenborough-narrated feature can't be far off.

News of fixture clashes - especially championship ones - always dampen her mood. Over the weekend, she thought the Ladies Gaelic Football Association was about to pass a motion at Congress which would make her life far easier.

To her surprise, and frustration, the motion was defeated.

"My manager sent me on a screenshot of the motion that was going to be discussed and I was like, 'This is unreal. There's not going to be any more fixture clashes'," Ambrose tells Balls.

"Then when the WGPA released the survey and I saw that 97 per cent of players were in favour, I was actually initially shocked with that. I didn't think as many players would want to see that happen.

"To be honest, I was actually shocked [that it wasn't passed].

"It was disappointing, especially for the year that's in it, 2020. We're striving to have more girls playing. When you're forcing them to pick a sport to play, that doesn't help what we're trying to achieve this year."

LGFA president Marie Hickey said at the weekend that the problem with the motion was its wording and the definition of a dual player. She added that it was her "belief that our rules sufficiently cover the dual player as it is".

I just don't see how that could be true, to be honest. If the rules did cover dual players, there wouldn't be as many fixture clashes. With Limerick this year, we had three camogie league fixtures - all three clashed with football matches.

The first match clashed, we were playing Derry in football in Martinstown in Limerick. Then the camogie match was on at the Gaelic Grounds at four o'clock. I played 20 minutes of the football match and then rushed to the Gaelic Grounds. I came on after half-time. That was the only day I made the two matches.

The training load comes down to what the managers decide. They tell me I'm going to camogie this week, football the next week.

You're putting yourself out there training five or six times a week to be faced with a fixture clash. It's just disappointing that way. It's demoralising. You wonder why you even bother playing the two of them. No one forces me to play the two sports; I just play because I love it.

There is an admirable idealism to Ambrose's attitude but she is also a realist and knows she is chugging down the line towards the day when a choice will have to be made between her to loves. 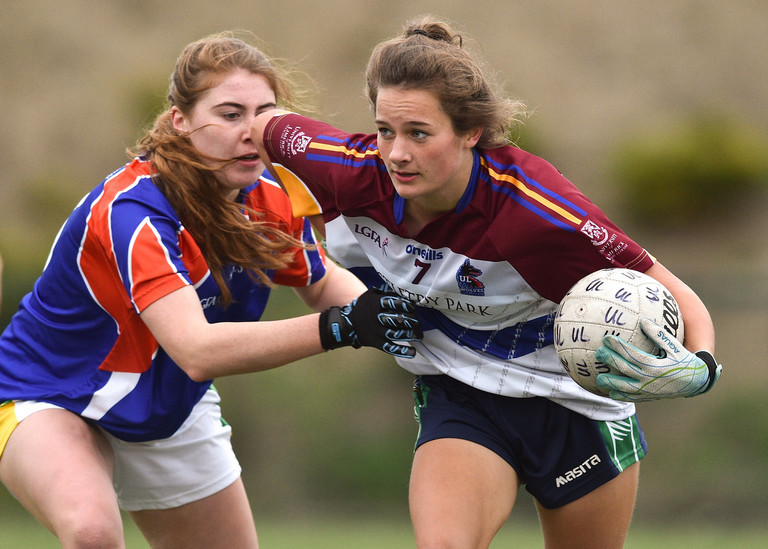 Roisin Ambrose of UL in action against Tara Breen of Mary Immaculate College Limerick during the Senior Final at the 2018 Gourmet Food Parlour HEC Freshers Blitz. Photo by Matt Browne/Sportsfile

"If I was to see the fixtures next year for league and championship, and knew there were going to be clashes, I probably would choose because I feel like I'm leaving one team down if I don't go to their match. It's upsetting that way.

"I suppose if Ì just picked one sport, I'd have more gym time, more time to develop as a player, more time to prep my food. Then the other side to it, I find that in playing camogie, I use my football mind, which benefits me compared to other players.

"I suppose if I was to pick one, I'd develop more as a player in that sport but that's not what I want: I want to be playing the two sports - I love them both."

The possibility that the LFGA, Camogie Association and GAA might one day be a happy family living in the same house is a beacon of hope.

"That would be of huge benefit," she says.

"At least then, they'd all be in the same room to discuss fixtures. I definitely think that's something that should happen. Right now, they don't even talk to each other. They put out their fixtures and that's that. There's no negotiating.

"The way I look at it, there are so many weekends in the year. There should not have to be two matches on the one weekend. I know the Football Championship doesn't start until mid-July and the Camogie Championship starts in early June. Even if you pulled back one of the championships so it started in May [it could help].

"In camogie, the league final is set for March. That's two months or six weeks to prepare for May. Maybe if one started earlier and the other is towards the latter stages of the summer, I could see that working. Even if they took every second weekend, there wouldn't be a clash. There are loads of ways it could work.

"There is no reason why matches should be played on the same day."

GAA
2 months ago
By PJ Browne
GAA, Camogie Association And LGFA Suspend All Activity Until March 29th
Previous Next

GAA
3 weeks ago
By PJ Browne
Tributes Paid After Death Of Legendary Cork Supporter Jonty O'Leary
Olympics
1 month ago
By Sean Meehan
Provinces Are Split On What Sporting Event They'll Miss Most This Year
GAA
2 months ago
By PJ Browne
GAA, Camogie Association And LGFA Suspend All Activity Until March 29th
Popular on Balls
The Rewind
10 hours ago
By Balls Team
Luke 'Ming' Flanagan Does European Parliament Video Call In His Jocks
2

The Rewind
17 hours ago
By Michael McCarthy
Joe Exotic Will Be Delighted - Carole Baskin Has Been Awarded His Zoo!
19