It was at the frontline of the battle against the Covid-19 pandemic that Carlow footballer and nurse Róisín Byrne celebrated a vital win this week.

After a month and a half of staff tending to patients in the main Covid-19 ward at St James’ Hospital in Dublin, the first discharge of a coronavirus-positive patient lifted hearts and spirits soared.

Recent weeks have been speckled with panic, worried families, illness and death, but Tuesday was a sweet day for Byrne and her colleagues – a significant victory.

“It was so, so nice to see him discharged,” she says.

“Every day there is that little bit of negativity and you are waiting for the numbers to be announced in the evenings, hear what the news tells us about the confirmed cases, the new death toll.

“We had everything ready for him to go home and we gave him a big, big clap on the ward when he was leaving. It was a really, really nice moment.”

Unfortunately, the lows have outnumbered the highs massively since Byrne (23) switched duties from general surgical nursing to caring for Covid-19 patients. As well as tending to her patients, there is also a delicate personal touch needed with their worried families.

It is really hard because the patients’ families are not allowed near them. You are trying to communicate with them as much as you can. They are obviously so worried because they cannot come in and see them.

We are trying to occupy everyone. For patients, it’s hard being in the same place for 24 hours, especially in the day time. We try and keep their spirits up as much as we can.

“It is quite daunting. It’s frightening for the patients, they are relying heavily on you,” Byrne explains.

“They can deteriorate quite quickly and you are trying to prioritise patients who are a candidate for ICU.

“They are big decisions that you have to make. You don’t know what you are facing every day.

“Morale is really, really good amongst the staff though. If anything, it has improved in the last month and a half. We are all on the same page. Communication has to be a big thing and the patient is obviously our main concern.

“We want to do as much as we can for them. It’s mentally draining, you don’t know which patient is going to get sicker and deteriorate quickly, but we try to prioritise patients that need our care.” 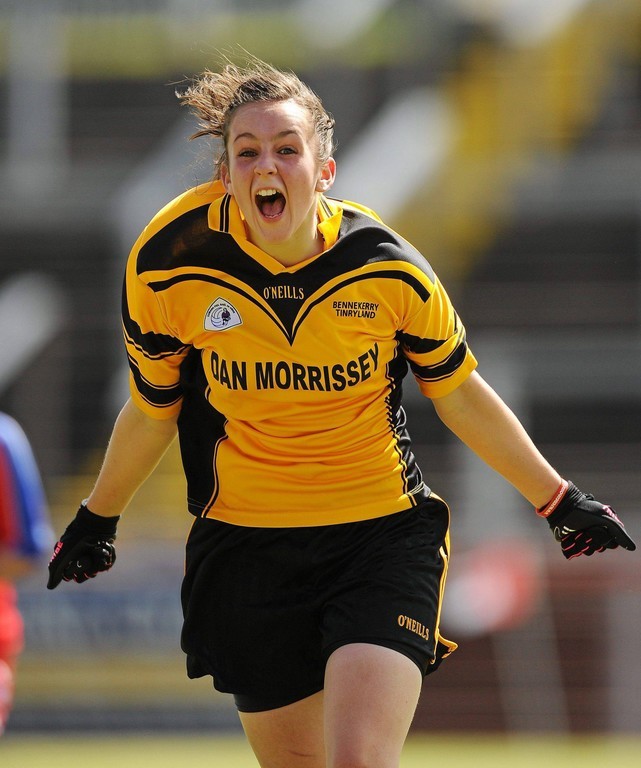 County football had already been put on the back burner for Byrne in 2020 as her nursing shift work meant she was unable to commit and deliver the standards she expected from herself. But when she clocks out of work, there is no stopping the fight with the coronavirus. Close to home it has its effects too.

“I’m still commuting up and down from Carlow. I’m in a Catch-22 situation whether I should be moving out or staying at home,” said the Bennekerry-Tinryland player.

“I am trying to do the right thing when I come in home. I go in and have my shower, change the clothes and stay away from my family as much as I can.

“I haven’t seen my poor Nana [May Byrne] in more than a month and a half now. I’m finding that tough. I just don’t want to risk it in case something happens.

“Nana lives right beside us at home, but all my family are looking after her. But you know, when you are used to the regular routine of going in to say hello, when you can’t do those little things it is hard.

“But I’m trying to isolate as much as I can and do the right thing, but then you have to get up and go to work.”

It seems like months ago that crowds flocked to the beaches and sights to celebrate Mother’s Day, despite being asked to practice social distancing. A video of a line of people queuing for food in Howth angered Byrne that weekend and she appealed for people to stay at home for Easter.

“I was very, very frustrated that weekend. I saw all those people out in the line queuing for food and that was really frustrating. If only they could see the effect of the virus.

“Unfortunately people are picking it up in the hospital, even health care workers are getting it and they don’t know how. That’s how easily it is being transmitted.

“I don’t think some people know that. You’d love to give some of them a reality check of what we have to deal with because it is even people with no history of illness that are getting really, really sick. It is not just the elderly, as a lot of people perceive it.

“Easter weekend is a big one. But I think that since they have brought in the new fines and with more Gardaí out in force, I’m hoping that things will be a bit better and people will stay at home.

“Just try and see it out. Stay at home, it will be worth it in the end and we can hopefully get back to some normality.”

See Also: 'The Shot Rang Off, One Footballer Looked Up The Road... Aidan Was Dead At That Stage'

GAA
2 months ago
By Donny Mahoney
Feargal Logan's Comments On Tyrone's Covid Vaccination Plan Don't Really Add Up
GAA
4 months ago
By Maurice Brosnan
Daly Highlights 'Huge Cloud' That Lingers Over Close Contacts Issue
GAA
9 months ago
By Balls Team
Battle With Covid-19 Scared Meath Legend Seán Boylan
Popular on Balls
Football
10 hours ago
By Eoin Harrington
John O'Shea Explains How He Ended Up In Goal For Manchester United In 2007
GAA
17 hours ago
By PJ Browne
Three Live Club Football And Hurling Games On TV This Weekend
GAA
12 hours ago
By PJ Browne
Incredible Penalty Halts Premature Celebrations In Galway
GAA
14 hours ago
By Maurice Brosnan
'Bad Coaching. I Think That Is A Big Problem In The GAA'