Twitter is a cesspool of conjecture and uninformed opinion. During last night's instalment of the Sunday Game, some viewers seemed certain that pundits Sean Cavanagh and Colm O'Rourke were wearing miniature poppies, as both men had red pins over the lapels.

#SundayGame @TheSundayGame I sincerely hope those are not poppies worn by your football panellists , a week before Bloody Sunday commemoration , Michael Hogan would be turning in his grave if it is.

Given that we are a week from Bloody Sunday, it would be quite a statement for the two GAA greats to wear poppies on RTÉ's flagship gaelic games programme. Their timing would be shocking as well Remembrance Day celebrations finished up last week.

This afternoon, a spokesperson for RTÉ confirmed that Cavanagh and O'Rourke were merely wearing a red lapel to promote a menswear brand they work with.  The spokesperson said the pins were 'definitely not poppies' and said it was  'purely coincidental that they were wearing the same company's jacket'. While a corps of vigilant readers on Twitter were busy correcting a lot of mistaken people last night, at least we now have official confirmation, and people can find something else to give out about. 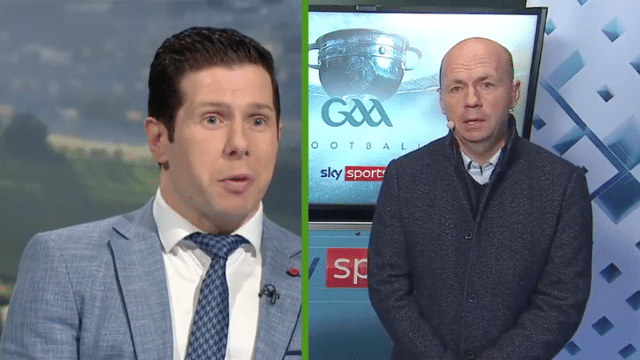