'Goals win games' is perhaps the oldest adage in the GAA, but it turned out to be the case in today's All-Ireland final.

Tyrone were fully deserving winners, outplaying Mayo in every facet of the contest. Despite this, it could have been a very different outcome if the teams' fortunes in front of goal had been reversed.

Whereas Mayo squandered a number of golden opportunities to raise a green flag, Tyrone were clinical in doing so.

Their first goal was a prime example, with Cathal McShane showing some quick thinking to direct a long ball beyond Rob Hennelly with his fist.

The second also ended up being palmed into the net, although it was a very different buildup.

It all started with Conn Kilpatrick's remarkable catch in the middle third, with Conor McKenna ultimately laying the ball onto a plate for Darren McCurry to score.

Tyrone have a second goal, with a lightning attack from one end to the other finished off by Darren McCurry in another body blow for Mayo #RTEGAA #MAYOvTYRONE

McKenna had had a poor game up until that point, having little impact on the Tyrone attack. However, his ability to remain cool under pressure despite his struggles was perhaps indicative of the difference between the two sides on the day.

Whereas Mayo panicked, Tyrone were clinical. Ultimately, this won them the All-Ireland.

Speaking on RTÉ after the match, the punditry trio of Kevin McStay, Sean Cavanagh, and Pat Spillane said that the two goals were the perfect examples of why Tyrone were the better team.

McStay: This is a no look pass (from McKenna), it's magnificent. The pace he's going at, to give that pop and know that McCurry is on his shoulder who has the easy task of popping it in...

McKenna makes the goal. He knows exactly what he's doing and doesn't even have to check for McCurry...

Cavanagh: It's probably symbolic of what this Tyrone team is all about. We don't have a Peter Canavan or David Clifford, we have a collective group and brilliant team.

Spillane: It's probably a snapshot in the difference between the Tyrone forward play and Mayo forward play.

In the Tyrone forward play the decision making was good, they had quick hands and players running into space and off the shoulder. Mayo didn't have that.

Mayo were certainly very out of sync in the forward line, especially in the second half. They seemed to continually run down blind alleys and fail to pick out their teammates off the shoulder in the half forward line.

Paul Galvin, a man who knows a thing or two about what it takes to succeed in that area of the pitch,  was not impressed with the way Mayo had approached their attacking play.

Mayo a great watch for supporters but a team I would struggle to play on . Backs upfield taking up space in the h-f line , no craft or creativity . Hard to be a half forward with running backs . #GAA #AllIreland

Whereas the running games worked late on against Dublin, Tyrone were more than ready for it on this occasion. They allowed Mayo to have the ball and waited for an opportune moment to force a turnover.

It looks like it will be back to the drawing board for James Horan and this team. 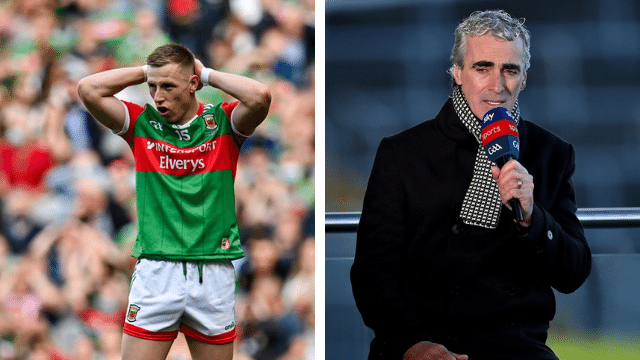