Simply being a hurler meant that Terence 'Sambo' McNaughton was a target for the UDA, a loyalist paramilitary group, in the 1980s. McNaughton, an All-Star in 1991, hurled with Antrim for 16 years.

"In 1986, the police came to me one evening and said, 'You better get out of Belfast. Your name's at the top of a UDA hit list'," McNaughton said in a new episode of TG4's Laochra Gael series which airs at 9:30pm on January 13th.

"I lived in Belfast for a good number of years because I was working there as a window fitter. An 18-year-old joined me from Belfast. It turned out that he was the one who was apparently going to set me up. The police told me that I had to get out of Belfast. We were classed as legitimate targets because we played GAA."

The wait is almost over!! ?

Sambo's wife Urusula added: "He came out of work, and there was a bullet with his name engraved on it, sitting on the [car windscreen] wipers.

"He never went out the door without me lighting a candle most of the time, or saying a prayer that he would get to where he was going safe, and get home safe. I just was scared every time he went out the door."

The first night that Sambo went out with his wife was to a disco in Ballymena. "It wasn't too bad until they searched the car, and they found hurling sticks," said Ursula.

Sambo added: "I can remember getting four Dowling hurls out of Kilkenny, and them smashing them on me, breaking them and laughing and sniggering.

"To be an Antrim hurler, or have a bit of a profile then, wasn't a good thing.

"You have to live. You have to get on with it. Maybe that mentality that you... You develop that stubborn streak. I loved the game, and I wanted to play hurling. I was never going to stop." 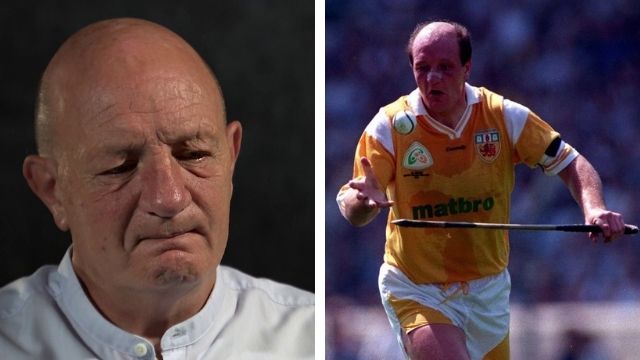 GAA
4 hours ago
By PJ Browne
Insane Drama As Late TJ Reid Goal Sends Ballyhale Into All-Ireland Final
GAA
6 hours ago
By PJ Browne
'That Will Tell You How Good A Hurler He Is, He's So Flexible'
GAA
3 days ago
By PJ Browne
Slaughtneil Getting 'Closer And Closer' To Big Semi-Final Victory
Popular on Balls
Rugby
6 hours ago
By Jonathan Byrne
Watch: Wayne Barnes Takes No Prisoners Sending Off Stade Player For Mouthing
Football
1 day ago
By Gary Connaughton
Carragher Reveals Unhappy Instagram Message From Lionel Messi After MNF Comments
The Rewind
1 day ago
By Gary Connaughton
Quiz: From Which Irish County Did This Company/Product Originate?
Football
2 days ago
By Jonathan Byrne
Women Footballers Call Out 'Embarrassing' Sun 'Exclusive'