Remembering The Mastery Of Seamus Moynihan And Why It Still Matters

Aidan O'Mahony tells a story in his recently released autobiography, Unbroken, about the aftermath of the 2004 All-Ireland final victory against Mayo. The central character was Seamus Moynihan. Kerry's champion.

As the final whistle sounded, O'Mahony was whisked away in a whirlwind of emotion and fragmented memories. For later triumphs, he'd actively try to savour the feeling but the first taste of success overpowered all senses. Certain moments transcended that haze.

"One of my main memories was meeting up with Seamus Moynihan and Darragh Ó Sé out on the field and being hugged by them, two gods of the game."

Later he swapped his jersey, a move that surprised friends and family.

"I always said it meant more to me to be standing beside Seamus Moynihan and Eamonn Fitzmaurice at the steps of the Hogan stand than having a jersey on my back."

From the moment O'Mahony arrived into Páidí Ó Sé's squad in 2003, he didn't have to look far for inspiration. Seamus Moynihan, who hailed from a neighbouring club, was the go-to defender and ultimate fire extinguisher. A leader who took him under his wing and helped him settle. He was proud to play with him. Took delight in seeing things like Moynihan's delight at the dinner table after the Munster final.

Today is his birthday. It provides a suitable moment to celebrate his mastery, but it is also a beneficial exercise in the context of our current football landscape. 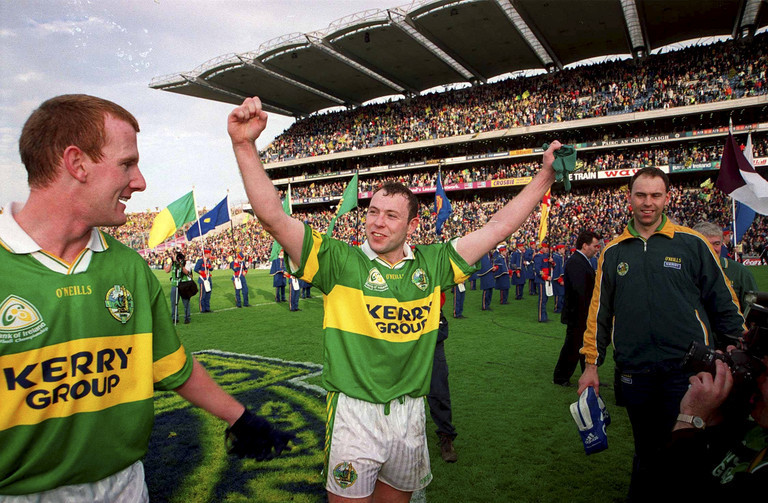 The tally reads four All-Irelands and three All-Stars. When RTE attempted to fill the void during lockdown last year they invited readers to vote for the greatest All-Stars of The Sunday Game era. Moynihan at full-back was a lock.

Silverware came from the off. All the while, failure was never far away. He won an All Ireland medal with St Brendan's and got his first trial with the Kerry seniors as a schoolboy in 1991. Famously, his debut was a disaster against Clare a year later as they lost the Munster final.

This stint was about what he absorbed rather than achieved. During his first trial game against Laois, Pat Spillane was a teammate. For the championship bow, his midfield partner was Jack O'Shea. A year later Eoin Liston returned to the squad.

All the while Moynihan was learning. Yearning. Soon he would assume the mantle and become the colossus player with pace, power, skill and insatiable hunger. 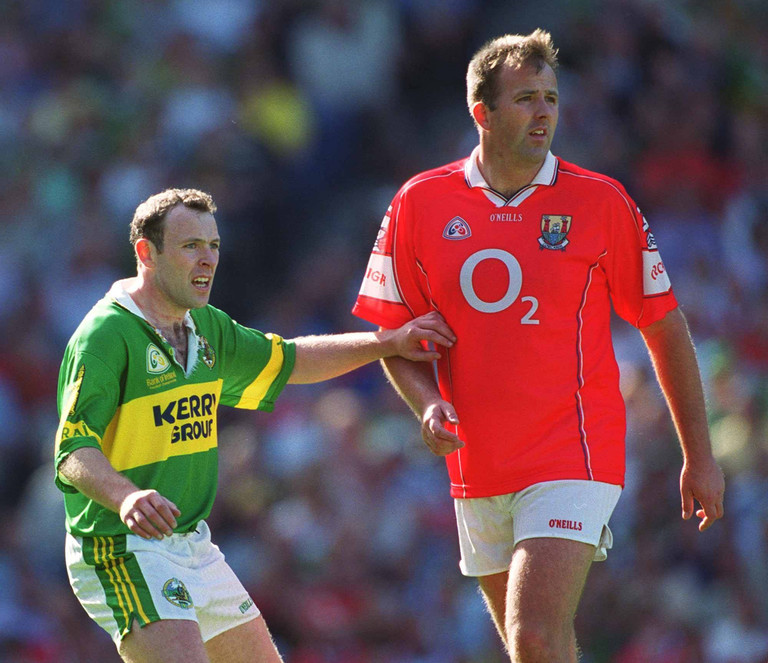 After he retired in 2006, he was enticed to the Great Southern Hotel under the illusion of an ordinary Glenflesk club social. He walked in the door to discover the entire night was about honouring their favourite son. 750 people packed the hall, all rose to give him a standing ovation.

"Seamus Moynihan and Jack O'Shea were the best players I have seen in my time following football," declared Ogie Moran.

"Seamus was the most respected player of his generation by his fellow players and that is the ultimate accolade," explained Mickey Ned O'Sullivan.

"Mick O'Dwyer came to Kildare first he was telling me all about this guy. Everything he said about him turned out to be true," said Glen Ryan.

Ja Fallon made the trip from Galway.

The main reason I came back as a player this year was that I heard of Seamus Moynihan's retirement. I played championship against him at minor, Under 21 and senior and never won a game; Now is my chance!

Seamus was always a step ahead of you and he would be gone thirty yards in a couple of seconds clearing fellows out of his way. I am honoured to be here tonight.

Tributes that lifted him to the highest pantheon of Kerry footballers. Defined by greatness rather than genius. Just the way he wanted it.

"I'd like to be remembered that I gave my all for Kerry. Every day I went out I gave it 110%," he said during his Laochra Gael episode.

While it was widely accepted the Kingdom's gatekeeper was good, some did quietly wonder if his prowess was sometimes overstated.

Writing in the Sunday Tribune, journalist Kieran Shannon penned a brilliant response to his colleague Liam Hayes on the age-old issue of casting a frosty cold eye on the present and a misty eye on the past. However, there were some observations he agreed with.

Heretical as it may sound in Kerry, it is time that someone in football has prompted the kind of debate about Seamus Moynihan and Maurice Fitzgerald's assumed greatness that hurling has long held about DJ Carey's (Football Knowledge, Higher Level, Question 1: 'Maurice Fitzgerald had as many poor performances in Croke Park as good ones and all Seamus Moynihan had over Cork's Ciaran O'Sullivan were his Celtic Crosses.' Discuss).

It is important to stress, the point was not if they belonged in the upper echelon but where: "Ultimately though any analysis of the last 20 years would conclude Maurice would walk onto a team of the '90s and ditto Moynihan onto that of the '00s."

So, does Moynihan belong on Mount Rushmore or some rungs below? And why does it matter?

His versatility was a blessing and a curse. It enabled him to plug gaps across the back six while consistently pulling him from his favoured centre back spot. In 2000, he expertly slotted in at fullback and matched off against the likes of Steven O'Brien, Oisin McConville and Padraic Joyce. A summer of hard road. 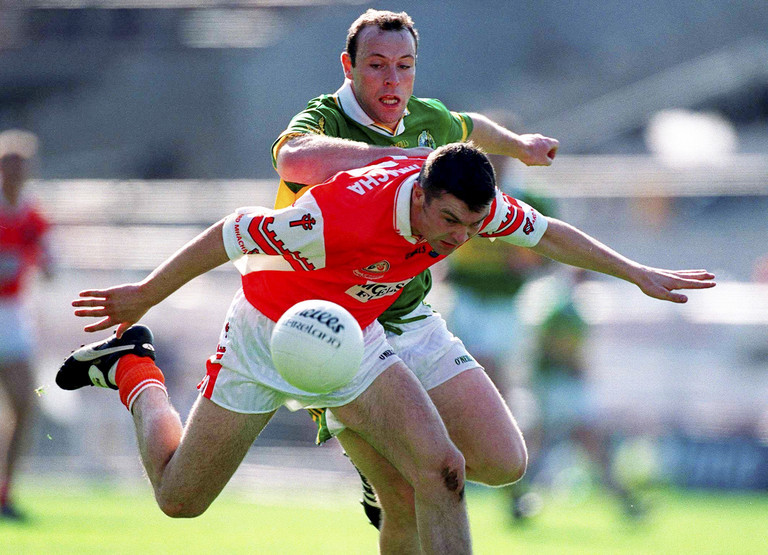 This remained the catch and kick era. One-on-one battles and forwards with space was the norm.

Moynihan had to play the hand he was dealt and commit to a highwire act. For much of the 2010s, defenders had the luxury of marking from behind the attacker. They could shepherd forwards away from goal or stand them up, reassured by a safety in numbers as sweepers cut out space and doubled-up in the tackle. This was not the case for the previous decade.

The Kerry stalwart's approach is best represented by that iconic play against Galway in the 2000 decider. Derek Savage won a long ball out near the sideline and immediately looked towards the square. There he saw Joyce and Moynihan, former Tralee IT teammates turned rivals, toe-to-toe.

In the ball sailed. Up Seamus Moynihan soared, five yards in front. The ultimate gamble. Succeed and it is a crucial intercept. One half-second off or slight miscalculation meant a goal. He won the ball, Kerry won the jackpot. 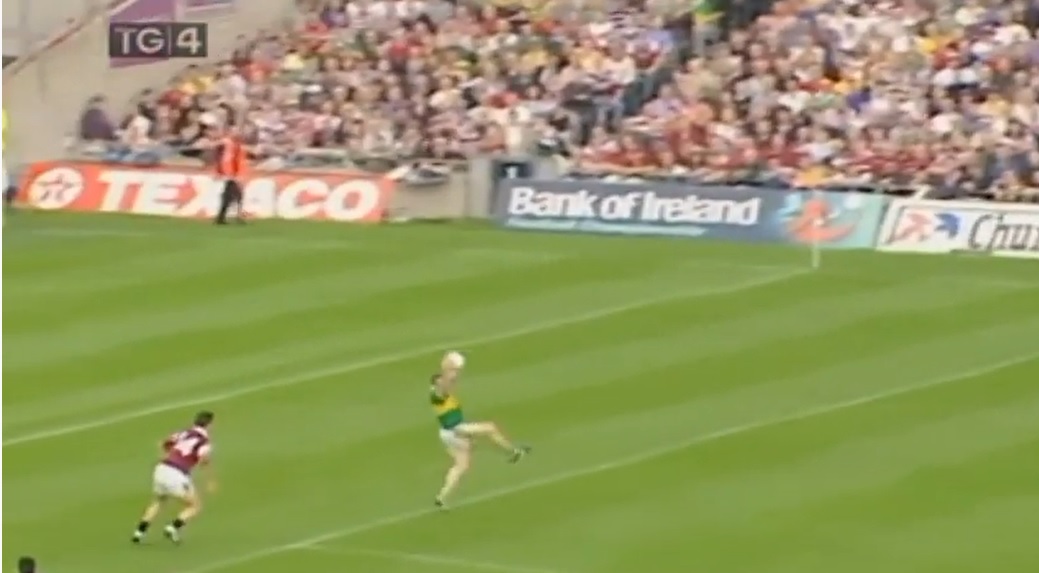 He was a modern defender in a bygone era. Kerry could play swashbuckling football because they had a rearguard willing to be exposed. Often they revelled in it. A challenge that taped into a trait shared by many of their illustrious players; cranky stubbornness.

Moynihan endured chastening days too. Colin Corkery gave him all kinds of trouble in 2001, Ronan Clarke did something similar in 2002. By 2005, the edge was blunted as he struggled with debilitating back pain. That All-Ireland loss hurt deeply, as did his withdrawal before the final whistle.

Even at the time, it was a level of exposure many escaped. Willingly persisting alone with a knife in a gunfight. 2006 was his final stand. He spent the winter hurtling up the hills of East Kerry on a bad bike, driven by a desire to finish on a high and have his recently born son witness it. Another Celtic Cross and All-Star was his just reward.

The recent All-Star debate gave us cause to remember Moynihan. Tyrone's Ronan McNamee is a leading contender for the full-back spot. David Clifford scored 0-8 off him in the All-Ireland semi-final.

In the 2000 semi-final replay against Armagh, Moynihan marked Oisin McConville. The Crossmaglen sharpshooter finished with 1-9. Moynihan finished the year with an All-Ireland, All-Star and footballer of the year.

This year Tyrone deployed a system that forced McNamee to frequently fend for himself. Commit to the cause to secure Sam Maguire. He needed to face the best footballer in the country single-handedly so that they could do so. Moynihan's law.

Then, like now, certain conditions made a defender's task extremely difficult. In the noughties, it was because of the lack of collective defending. Today, the offensive evolution has produced prolific attacking units fabricated to manufacture high percentage scoring opportunities.

Dublin mandated this change. They shattered blanket defences and stressed the need to be more attack-minded. It was built on a trust in their versatile defenders in one-on-one battles and the production of more mobile footballers with rounded skillsets.

And it should be stressed, the game is better for it. Scoring records will be broken, the spectacle is immensely improved.

Moynihan showed elite defensive attributes can still exist in an offensively minded game. a paradox hardwired into modern football. At times he could be awesome. Sometimes he could be exposed. Often both happened in the same match.

That was an accepted duality. A style defined by risk and reward. The sooner more come to terms with that mantra, the better Gaelic football will be.

SEE ALSO: Proposal B's Flaws Are By Design, Not Accident 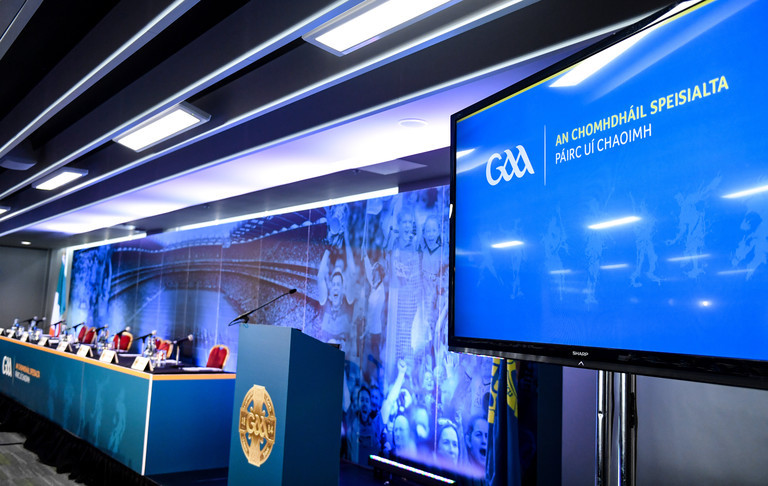