More than the medals, Seán Cavanagh values the memories. Though he won three All-Irelands with Tyrone, and was named Footballer of the Year in 2008, it is moments with his club Moy Tír na nÓg - good and bad - which stick with him most.

Through the years, Cavanagh was lucky enough to have some of those moments with Moy captured by Sportsfile. We asked Seán about six photos from his club career, spanning 2008 to this summer.

AIB and Sportsfile have teamed up to create a picture book, The Toughest Season, which will capture the resilience of GAA communities this year.

They are looking for people nationwide to contribute pictures of their own club and community from the past few months. There are no strict criteria for inclusion other than images should reflect the special place occupied by Gaelic Games in Irish society. People can enter by using the hashtag #TheToughest on social media or through the form at the bottom of this article. The closing date for entries is Friday 23 October.

'That one really hurt' 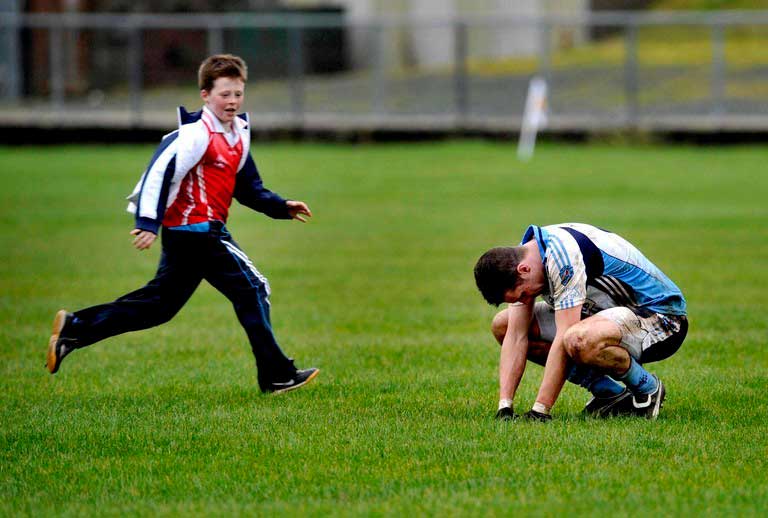 "That was probably the toughest moment of my entire career," says Cavanagh.

"It was the first championship final I'd played for the club. Our club hadn't won any sort of a championship since the early 80s.

"The game was sandwiched in between the All-Ireland final, which I got Man of the Match in and was a euphoric occasion for Tyrone, and heading to Australia for the international rules. 12 hours after that photo was taken I was boarding a plane heading to Perth where I was captaining the Irish squad.

"I was probably at the top of my individual strengths but that day there was a cross wind and some shots I was taking were not going over.

"My brother Colm was sent off quite early in that game, maybe after 10 or 15 minutes. We ended up losing by a point. It was one of those games we dominated for the most part and should have won but it didn't come together.

"There was heartache and pain at that moment. No matter what I won at county or international level, the club was where the heart was. That one really hurt. It took me a while to get over it." 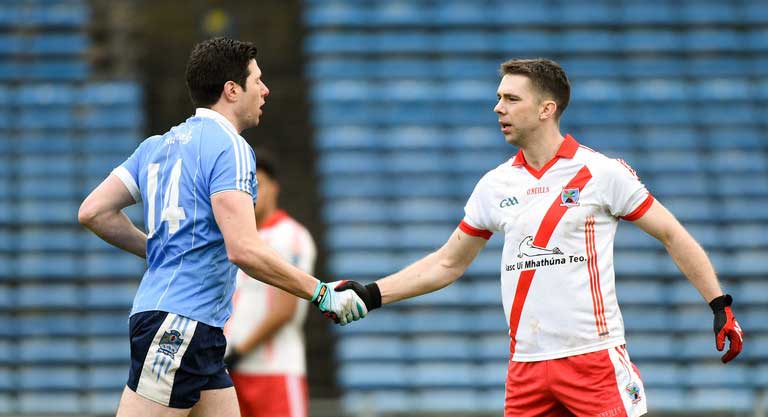 "I hadn’t marked Marc at county level all that much, but we were part of those Tyrone and Kerry teams in the 2000s that were arch rivals. I had always recognised him as being one of the best defenders that played the game.

"You pretend you're going to dislike someone and you try to get yourself into that mindset when you're playing but ultimately, when the final whistle goes, you have a huge respect.

"That day we went at one another for 60-plus minutes. It was a really attritional game, played in January with wind and rain. Both teams were hanging in there.

"A long ball went in with a couple of minutes to go and myself and Marc jostled for it. The ball broke to Harry Loughran and he scored a goal, soccer-style. We kicked on with two points after.

"It's probably the best day in our club's history. The moment that goal went - I think TG4 caught the image well - it cuts to the Moy support that was there, and they were going berserk. That really captured what it meant for the club,

"If you had a poll in the Moy, which game and what moment has been replayed the most, I can honestly say that's by far the winner. Usually, we fast-forward to the 59th minute and watch the last 10 minutes.

"To match up against a team like An Ghaeltacht with my own club was a huge honour. That's one of the photographs that I have at home on the wall. There's not many, there's only three or four images." 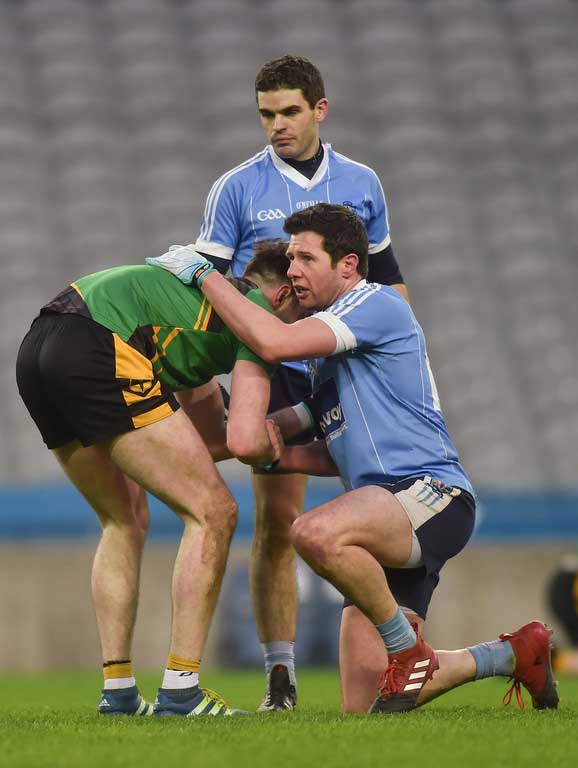 "This is where you want to be at, standing in Croke Park with your club [as All-Ireland champions]. It's up there as my proudest moment.

"I know it was heartbreak for Michael Glaveys, you could see the hurt on their faces. I wanted to commiserate them because I know for some of those lads, that will be the pinnacle of their career. To lose, it must be difficult. I've been spoiled in that I've never lost a big national final.

"It was a realisation that it was heartbreak for these guys. I just wanted to make sure they knew that I totally respected them and that I thought they were a great team."

'An image that I have as the background on my phone' 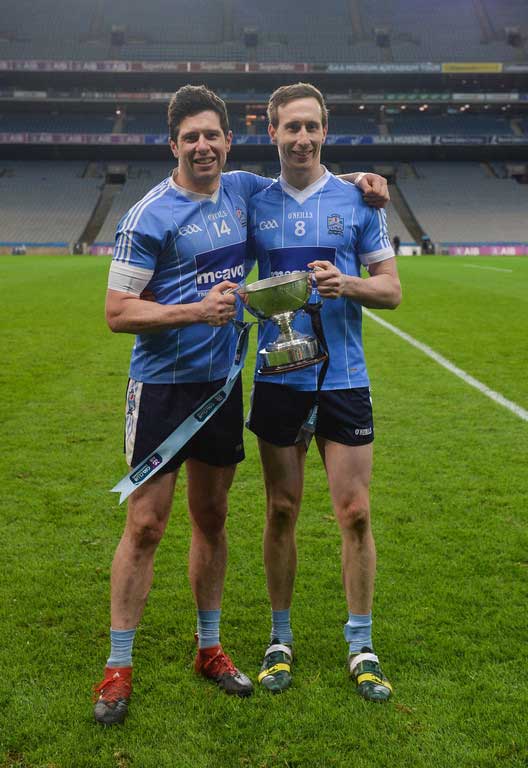 "My father would have been a core part of the Moy team that won the Tyrone Intermediate Championship in 1982.

"It was always one that my dad threw back on Colm and myself: 'You've won lots with Tyrone but you've never done it with your own people'. That was a real motivation that year.

"In previous years, we'd had three or four county players. It was always something lingering in the back of our minds that we hadn't achieved what we probably should have with the level of players that we have.

"That year, things just fell into place. They didn't start the county championship until we'd finished with Tyrone. I had just retired from inter-county a few weeks earlier. It was a perfect transition.

"In 2008, when we won the All-Ireland with Tyrone, I remember standing in the Hogan Stand and telling Colm, 'Get up there, I want a picture of us holding Sam Maguire'. He was only a young lad at that point. He'd only come onto the panel a year earlier. I had the foresight to ensure we have that memory.

"In 2018, it was the same case in Croke Park, telling him that I need a picture of you, me and this trophy for ever more. It's an image that I have as the background on my phone and I think Colm is the same.

"The likes of Colm getting sent-off in that intermediate final in '08. He always had a huge regret about that moment. He was young, got drawn in and picked up two yellow cards. He realised if he hadn't gone off, we probably would have won the game. When we did eventually get over the line, it made it all the sweeter."

'I wanted to make my family proud' 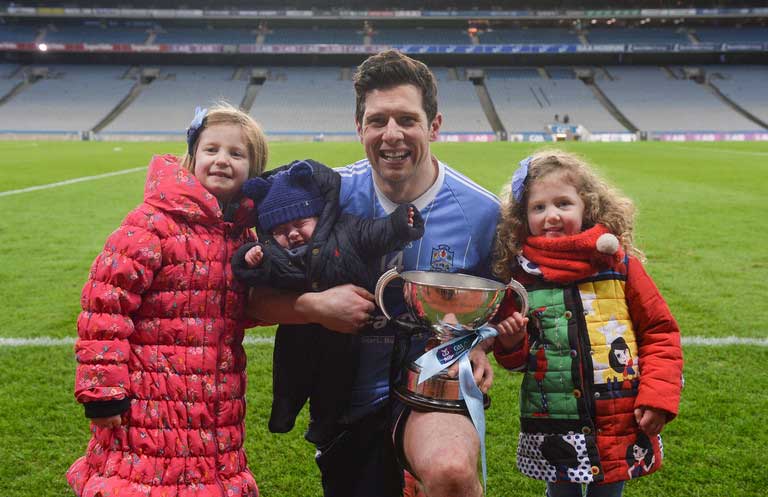 "At that stage, with the county career over, it was probably going to be the last image of me wearing football boots in Croke Park.

"It was a scramble for my wife to get down from the stand to get a couple of photographs. Thankfully, the stewards allowed us to do so and I managed to get Eva, Seán, and Clara into my arms. It's one of those images we'll be looking at in 30 or 40 years time and will be able to cherish that moment we were all together on the Croke Park pitch.

"A big reason why I played the game, and why I sacrificed so much, genuinely was because I wanted to make my family proud.

"The Cavanagh family name had been around the Moy long before me. My grandad was club president and had been a stalwart of the club for 50 or 60 years.

"He passed in the early 2000s just after we'd won Sam Maguire in 2003. I was delighted to be able to bring Sam Maguire to my grandad.

"He was 82 or 83, a man of no emotion, but he cried and I sat there with him. I had to wrestle Sam Maguire off him. He told a lot of people that was his proudest moment, seeing his grandson bring Sam Maguire home to him. You realise that's why we do this, it's for those memories.

"I had a fair bit of success in the 2000s when my kids weren't there. To have that moment, when they're standing there in Croke Park, proud as punch, was a nice one."

'The other end of my career' 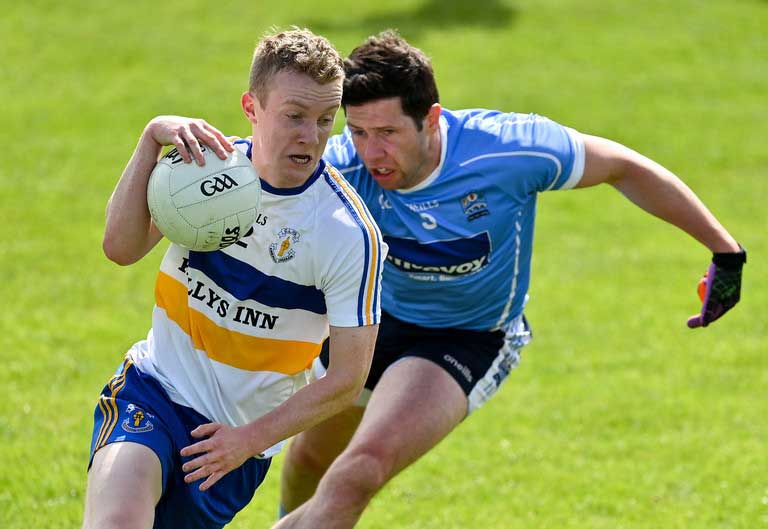 19 July 2020; Mark Kavanagh of Errigal Ciaran in action against Sean Cavanagh of Moy during the Tyrone All County Senior Football League Group 1 Round 1 match between Errigal Ciaran and Moy Tír na nÓg at Cardinal MacRory Park in Sixmilecross, Tyrone.

"I was mad keen to get back out there. I'm now at the stage where I'm a player-manager with the club. It was a strange year to be having to manage the lockdown. We had done a fair bit of training and whatnot before the pandemic arrived. It was great to get off the 5k routes and everything we'd been doing to keep ourselves remotely sane through it all.

"It worked out quite well for us. Errigal Ciaran would be one of the top clubs in Tyrone. We stayed with them all the way, scored a goal with a few minutes to go and won the game by a point.

"I played my first game with the Moy seniors in 1998. 22 years on from that, I'm at the other end of my career but I'm still loving every moment of it. Thankfully my body is still allowing me to play.

"I'm trying to give as much as I can back to the next generation in the Moy. Hopefully, someday, my kids will be part of it

"We won a senior championship in 1920 but most of us can't remember that far back. Hopefully, we'll get the Moy name back on that roll of honour at some point."

If you have an image from the 2020 GAA season that you think should be featured in the book then send it our way in the form below, and you could win €1,000 for your GAA club!

See Also: 'It Was The Closest Anyone Would Get To Pucking In Croke Park For Six Months' 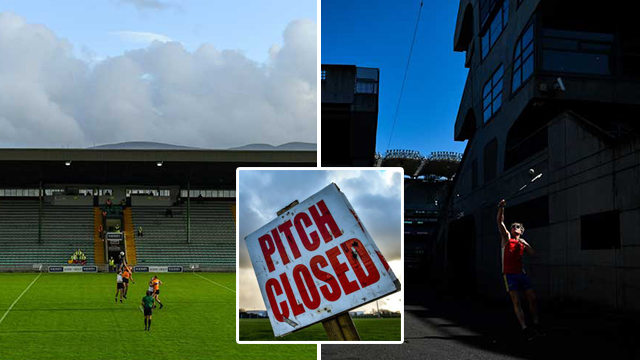 GAA
4 days ago
By PJ Browne
'He Was Such A Battler' - Hegarty Pays Tribute To Late Limerick Physio
GAA
1 week ago
By PJ Browne
App Born In Galway Hurling Backroom Being Used By Clubs Worldwide
Rugby
3 weeks ago
By Balls Team
12 Of The Most Memorable Post-Game Interviews In Irish Sport
Popular on Balls
GAA
13 hours ago
By Balls Team
Ranking The Top 6 'Outside Managers' In The History Of Inter-County GAA
Football
14 hours ago
By Gary Connaughton
Mick McCarthy Says Cardiff Will Be Targeted Due To Promotion Push
Football
15 hours ago
By Fiachra Gallagher
Five Years On From Midtjylland, How Do We Talk About Marcus Rashford's Career?
Rugby
16 hours ago
By Gary Connaughton
Wales Legend Thinks It's Time For Ireland To Move On From Murray & Sexton