Sean Cavanagh Has Regrets About Pushing Himself Past The Limit

Looking back on his inter-county football career, Sean Cavanagh has some regrets about playing through the pain barrier.

Cavanagh played for 15 years with the Tyrone seniors, winning three All-Irelands and a Footballer of the Year award.

"I certainly have scars in various parts of my body where operations were necessary," says Cavanagh in his episode of Laochra Gael which airs at 9:30pm, April 22nd on TG4.

"I get up in the morning with stiff ankles, stiff knees, stiff shoulders - thankfully I'm married to a GP who can help me get through a lot of it.

"I certainly sacrificed a lot physically and probably through my own time mentally as well. I really pushed myself to limited."

In his mid-20s, Cavanagh went to see a specialist who told him he had the knees of a 70-year-old.

"I could see written on the sheet that it was BOB, which he told me as bone-on-bone, that'd I'd worn away whatever protection I had on my right knee," Cavanagh says.

"He said, 'Look, how many games do you play a year?' I was trying to be conservative saying maybe 20 - 25. It was probably closer to 35. He said to me, 'That number needs to be 10 and you're going to have to miss every other training'."

Despite the advice, Cavanagh played on. "Whatever the consequences may be, they were going to be," he says.

Cavanagh has been the victim of excessive force on the GAA pitch over the years. The 38-year-old would like to see the Association tackle the issue of violence during games.

"I've had teeth knocked out plenty of times, off the ball, on the ball," he says.

"You don't want to be seen as the person that rats someone else out, but until someone is brave enough to come out and speak about it, challenge the authorities, I think it's only at that point then that the real change will happen.

"It's for my baby Sean and Lorcan - I would like to see a change so they are protected." 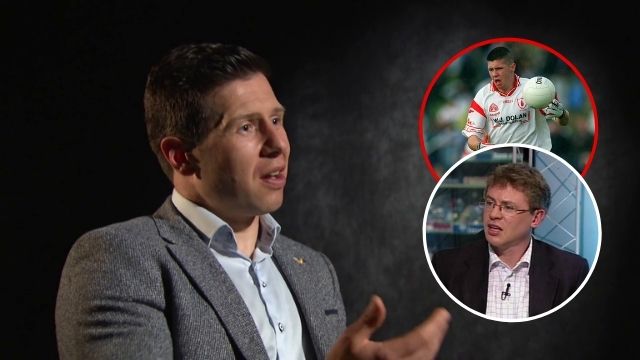