Something has been happening lately. Something unnatural, obscene and just down right scandalous. A proliferation of women - yes, women! - have been getting jobs in sports media.

This might be reasonable to accept if you've pounded a few bottles of Chardonnay, but for the rest of us, it's literally impossible to comprehend women penetrating the domain of sports punditry.

And if you try to convince me that the women are capable of earning these jobs based on merit, I can only laugh in your face.

We have the likes of Tracy Piggott, Jacqui Hurley and Sinéad Kissane to thank for pioneering this ludicrous movement and I think it's evident that despite their years of experience and incisive contribution to sports journalism, they haven't got a clue what they're at.

And as for retired camogie player Anna Geary, what makes her think that winning four All-Ireland medals and four All-Stars with Cork as part of a much celebrated and extensive career in GAA gives her the authority to make comments about the game?

It's anarchy, lads, sheer anarchy. But fear not friends, we've compiled an eight-step guide which, if followed correctly, will fully demotivate any aspirational woman from going for a job in sports media again.

Remind Her She's A Woman And Therefore Doesn't Know Much

While women are typing up those sports articles with aplomb, you can be absolutely sure that the whole process has forced them to forget what gender they belong to. It is therefore your duty to pull them back from the brink of insanity and remind them that they're only women.

Tv3 have a random woman in the studio doing #RWC punditry. Just shows you how gimmicky & laughable a sport it is #thugby #smugby #optics

Phrases like 'sure what would she know she's only a woman' are ideal in a case like this. It's direct, informative and reinforces the fact that they're cursed with a brain power too weak for sports discussions.

It's important to ensure you spend as little time as possible focusing on her actual performance as a pundit and more time emphasising what she's wearing or how she looks. The purpose of this is to leave her feeling disillusioned and prompt her to question her ability as a professional. Take a look at some of these cracking examples posted on Twitter.

Anna Geary should be on the panel for the Sunday Game full time. Serious eye candy @TheSundayGame #SundayGame

Direct her back to the kitchen

While the woman on the telly is off gallivanting on the television, your mug remains tealess and your hunger pangs from lack of sandwich digestion are getting worse.  So when you get your opportunity to directly attack these women, make sure to make them feel guilty for recklessly abandoning their traditional duties to society.

If the mention of tea and sandwiches proves insufficient, more drastic action may be required to save this girl from any kind life of liberation. Post a picture of an apron to her Twitter account or quote some reduced prices for an iron from the Argos catalogue.

'That doesn't look like a kitchen to me,' 'That's a weird looking apron,' and 'get back in the kitchen' are  also preferable phrases you can rely on.

Advise Her To Take Up A More 'Lady-Like' Pursuit 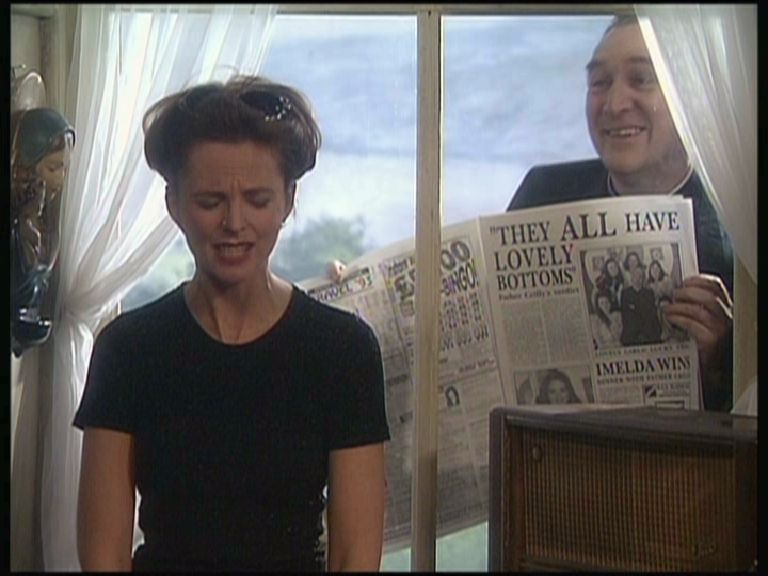 Another gateway to salvation for a woman who somehow managed to sneak her way into sports journalism is to suggest some activities that are more appropriate for ladies. Advise her to take up some less stimulating interests like bingo or card games like bridge or 25. She might find the transition difficult now, but believe me she's going to thank you for it some day.

If There Are Two Women On Your Telly, Try To Turn Them Against Each Other

When you're trying to stage an intervention of this magnitude, you should always assume that the target in question loves nothing more than to engage in a spate with other female colleagues. Go for the jugular and take inspiration from perfectly-loaded comments such as this one.

Evanne Ni Chuilinn’s is such a beautiful looking young woman,not much make up needed,I bet Sharon Ní Bheoláin hates when she is on @rtenews — Val Sherlock (@valsherlock) October 22, 2013

Last year, controversial GAA analyst Joe Brolly posted one of the most enlightened tweets of our time, which read as follows before it was deleted.

It was composed on the back of his discovering that Rachel Wyse had been selected to anchor the SKY Sport's GAA coverage that summer. Amazingly, it sparked a wave of outrage, but thankfully some online commentators spoke out in support of Brolly.

Joe Brolly forced to apologise for ;Baywatch babe barb - Can't open our mouths any more. What a pathetic country. Rachel, Wyse up.

Play It Cool When You Don't Get A Response from Her

If she doesn't reply to your clearly intelligent statements, I really wouldn't worry. She's probably not in an area that has wifi right now, or she has seen the light and is already planning to end her career in sports media.

via GIPHY Don't ever assume that she might have other things going on that are more deserving of her time and energy. I reiterate, it's unlikely that this will happen, but if it does, do your best to remain composed about it. Getting irate about her not getting irate won't help your cause.