Meath Footballers No Longer Have 'Dread In Their Stomach', It's Now A Pep In Their Step

To Shane McEntee, the difference between this year and last year is black and white, night and day, Mourinho and Solskjaer.

"It makes going to training an awful lot easier," the Meath footballer says of his county's run to this year's Allianz Football League Division 2 final against Donegal.

A win on Saturday would be the head on the pint - promotion has already been achieved. Next year, Meath will play Division 1 football for the first time since 2006.

"We were saying this time last year, we had to win our last two league games to stay up and you’re going to training and you have that dread in your stomach – ‘are we going to be the ones to get us relegated?’

"Now you’re going to training and lads are jumping out of the car. They can’t wait. One match ends and you’re kind of dying to get going again and it makes a massive, massive difference."

"I'd a good chat with Barry Dardis after the game yesterday and we were on the same minor team and were lucky enough to get a few games out in Croke Park," says McEntee.

Then he had an All-Ireland colleges final there with St Pat's and as young lads you think, 'This is the norm, this is all we're brought up with.'

And then you're seven years later and for a lot of us, it's our first time back there, certainly with Meath anyway. So that's going to be a challenge and it's special. It's where you want to be and we'd like to think we're going to keep building and try to be here on a more regular basis and not have that big gap.

Another factor which makes this year's achievement special for McEntee is the family element. His father, Andy, is now in his third season in charge of the Royals.

"I think everyone who knows my dad knows the amount of work and effort he puts into it," says the 25-year-old army officer.

"But I naturally see a bit more of it, just from being around him that bit more often. Look, it’s really nice to get home and chat to him afterwards.

"It is tough and it's unique, it brings its own challenges. I would have had various levels of experience with it in the club underage and one of my minor years he was the manager as well.

"That probably helps but you're under a different level of scrutiny once you get to senior inter-county. It probably did take a little bit of getting used to but I think it's alright. We manage it relatively well."

"Maybe I'm feeling sorry for myself but I think he might the odd time," says McEntee with a smile when asked if his father is more demanding of him than others on the panel.

"I think we work quite hard to not make it noticeable in the team dynamic but there's been the odd time when it looks like a father and son rowing rather than a manager and a player - the very odd time.

"I think the lads get a good laugh out of that as much as anything else and I get a bit of slagging off them over it. But no, for the most part, it's not too bad." 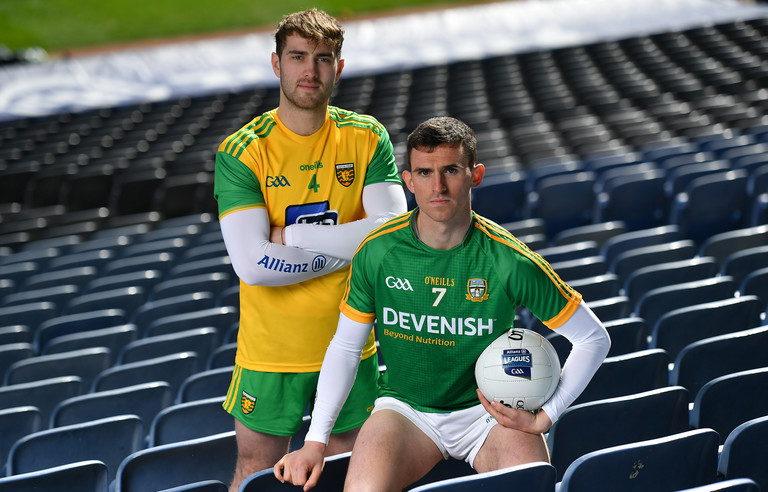 Meath won six of their seven games in this year's league. Their only loss was the sort of result they've been attempting to eliminate: a moral victory. That came against Donegal in the second round when a lucky Caolan McGonagle goal was the difference between the teams.

Last year's championship, like 2017's, also ended in a moral victory. Those games against Tyrone and Donegal are still referenced by the panel.

I think we are probably still getting over it because we still use it as a reference point, that’s the level of performance we have to get to in order to be in any way competitive and we have to be better than that again if we want to win games.

At the end of the day, it’s not much good having moral victories and ‘Jesus, we put in a great shift against Tyrone but we didn’t win.’ So it’s still referred to.

Similarly Donegal in the Championship the year before, it was a very similar story, a one-point defeat when we felt we could have won the game. It was hard and I think it was the shortest campaign Meath had had in a long, long time.

You’ve to bear with all that and you take it hard but I suppose we have bounced back so far in the right way.

Of the current Meath group, only Mickey Burke has played Division 1 football. For Burke and others who have stood on the second rung for so long, it will be special to get back again to the league's top tier.

"He works just as hard, he’s so meticulous, he’s so precise with all his work so while he mightn’t have got as much game time as he would have liked so far this year, you knew by him straight after that this was a big deal for him and he really, really valued it so it was great for someone like him.

"We'll park it now after this weekend but certainly whenever pre-season training comes back around - we'll hope that's a good bit down the line based on how far Meath go - but whenever that does come back around I think it will be so much easier for lads to do the dark, cold nights knowing we've a huge challenge ahead of us."

In attendance at the 2019 Allianz Football League Finals preview are Shane McEntee of Meath, right, and Stephen McMenamin of Donegal at Croke Park in Dublin. 2019 marks the 27th year of Allianz’ support of courage on the field of play through its sponsorship of the Allianz Football and Hurling Leagues. Mayo meet Kerry in this Sunday’s Division 1 decider at Croke Park (4pm), while Meath and Donegal will contest the Division 2 Final in Croke Park on Saturday (5pm), preceded by the Division 4 final meeting of Leitrim and Derry (3pm). Photos by Sportsfile