When the chips were down on Sunday, Limerick reminded everyone why they are the best team in the country.

Having performed poorly in the opening half of the Munster final against Tipperary, they found themselves trailing by ten points at the interval.

Most teams would probably think that the game was all but over at this point. Not Limerick.

They produced a remarkable second half display, blowing Tipp away with some incredible passages of play. Kyle Hayes' stunning goal summed up their performance.

Incredible run up the field finished in an unstoppable GOAL from Kyle Hayes for @LimerickCLG v @TipperaryGAA in the Munster Senior Hurling Championship Final #GAANOW pic.twitter.com/fDLewPxCVK

It was an incredible comeback, one which very few teams could replicate.

The fact that Limerick have the best squad in hurling certainly helped them in this regard, but Shane McGrath believe talent was not the biggest factor in the way they responded to that early adversity.

Speaking on GAA Embedded, the former Tipp star said that it is the culture in the Limerick camp that makes them such a big success story.

John Kiely sums everything up for me. You're ten points down at halftime, you do a little bit of restructuring, but you need to have a culture embedded in the group.

That's what these Limerick lads have. They are very close on and off the field.

John Kiely said after the game 'we did this for the group, for the guys this morning who trained at Kilmallock, they trained their backsides off'.

The 10 or 12 guys that trained at Kilmallock are helping to make this team better. Even when the Limerick lads are lining up to go onto the pitch, there are subs either side of the wall there to give them a clap on the back.

For me, that's what it is. You can have all that talent you want in the world, but if you don't have that culture or belief in each other when the chips are down (you won't be successful).

For anybody that was there yesterday, ten points down at halftime and the majority of other teams would have said 'it's so hot, it's just not going to be our day'.

But no, because of the whole culture they have, the group they have, and obviously the talent they have (Limerick came back).

They outscored Tipp 2-17 to 1-5 in the second half, and let's be honest Tipp's goal was late in the game and was a consolation.

It was just a phenomenal second half performance, one for the ages in a Munster final.

Limerick will certainly take some stopping in this year's All-Ireland series. 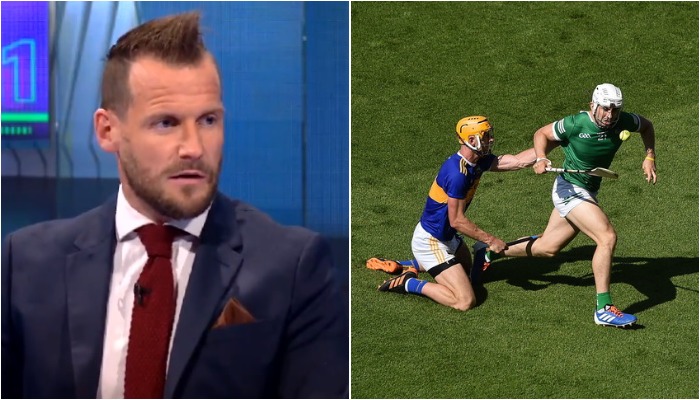 GAA
1 week ago
By Gary Connaughton
Darran O'Sullivan Giving Cork Little Chance Against Kerry This Weekend
GAA
2 weeks ago
By Gary Connaughton
Darran O'Sullivan In Favour Of Punishing Striking Offences With Red Cards
GAA
1 month ago
By Maurice Brosnan
Just How Important Are Hand Signals In The Modern Game?
Popular on Balls
Tennis
4 hours ago
By Andrew Dempsey
Novak Djokovic Lost The Plot During The Bronze Medal Match At The Olympics
GAA
9 hours ago
By Donny Mahoney
Down's Ruairi O'Hare Gives Extraordinary Interview After Grief-Filled Ulster U20 Final