There was a slightly bizarre occurrence in the Leinster club championship at the weekend when Colm O'Rourke and his son Shane O'Rourke were both sent off for Simonstown Gaels in their Leinster Senior Football Championship quarter-final against Rhode of Offaly.

Below: Colm O'Rourke watches from the stands

According to RTE, O'Rourke Sr was "sent to the stands for for vociferously challenging a decision" relatively early in the game whilst Shane saw a second yellow card for a high tackle about ten minutes into the second half.

Below: Shane O'Rourke is shown a second yellow card 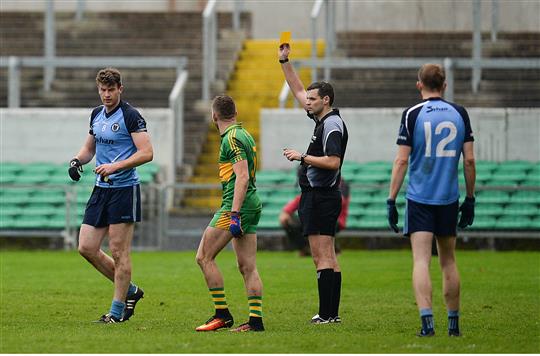 Simonstown went on to lose the game by 1-12 to 1-09, their challenge hindered somewhat by the restriction of Conor Nash who apparently didn't play as a result of being under contract at AFL club Hawthorne from November 1st.

O'Rourke was gracious in defeat, telling RTE that he was "proud" of his team and wishing Rhode well in their semi-final clash with Sean O Mahonys of Louth (St Vincents and St Columbas, Mullinalaghta compete in the other semi).