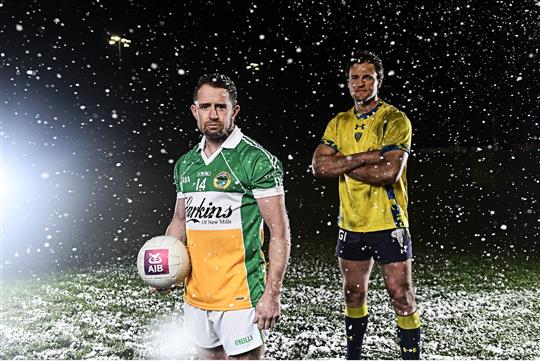 Shane Williams has a look of amusement on his face as he relates the confusion he experienced prior to his first ever full game of Gaelic football.

The Glenswilly coaches were attempting to furnish the Welshman with some tactical nuances of the sport - mainly the type of movement they wanted to see from him.

The coaches were taking me in a little room and they had all these little magnets on the board with the pitch. They were saying, 'On our ball, I want you to go here and here and then here.'

There was a bit where he was doing this [crosses hands wildly] and I was like, 'Will I just stay up front?' They were like, 'Yeah, you just stay up front. When we get the ball, you just run as fast as you can and hopefully, you can gas a few of the boys.'

Last month, Welsh rugby's all-time top try scorer spent a week in Donegal with county champions Glenswilly as part of the AIB-commissioned 'The Toughest Trade'. Glenswilly and Donegal's Michael Murphy made the transition to rugby, with Clermont Auvergne, for the other part of the documentary.

Prior to travelling, Williams enlisted the help of two former Lions teammates - Shane Horgan and Tommy Bowe. Their descriptions of Gaelic football left the 40-year-old thinking, 'What have I let myself in for?'.

Overall, Williams says that he enjoyed the experience. That was despite finishing the week shattered - both physically and mentally. He took part in 'three or four' training sessions which varied from fitness to weights to actually playing the game.

The schedule kept by Glenswilly players was something which struck the 87-cap Welsh international as was the size of a GAA pitch.

I couldn't get over the amount of running you had to do in training.

What you do have to get used to is the size of the pitch. You're running a lot of that time not even touching the ball, just trying to find a bit of space. By the time you get the ball, you're actually blowing, so little things like that that I learned from scratch really.

We had an early morning weights session as well. I haven't done anything like that since I finished playing rugby.

I just couldn't get over the fact that these boys are amateur players and they were getting up at six o'clock to do weights sessions. They went to work and then came back and did a training session in the evening.

The week culminated with Williams playing in a challenge game between Glenswilly and St. Mary's Convoy. The game was played in far from ideal conditions - a Donegal blizzard.

The conditions were the most bizarre conditions I've ever played in, in my life. We had a bit of rain and it was a bit cold, but we went in and got changed, opened the door to go out for the game and I couldn't see anything. It was just white, a blizzard of snow.

I enjoyed it, I got to run around. Tough conditions, a lot of running involved. I didn't expect it to be that tough in that respect.

Williams played as a forward, scoring four points - a performance which was described as 'magic' by the Glenswilly chairman. Jokingly, Williams says the adverse conditions may have aided his cause, 'I think the wind and the snow helped me because I couldn't see anything. I just closed my eyes and kicked the ball.'

During the game, he found it hard to shake off an attitude which had been instilled from playing soccer - the requirement to get back and defend after losing the ball. 'As soon as I started running back in Gaelic football, the coaches on the sideline were shouting, 'Woah, woah, stay there.' All the players were shouting at me.'

The conditions were not the only aspect of the game which he found strange. He played professional rugby for 14 years - one of the most demanding of all sports - but he still found the supplementary, off-the-ball physicality of GAA somewhat jarring.

What I found quite bizarre is that I could be standing there waiting for the ball, rather than going to get the ball, and then someone would come next to me and just smash me off-the-ball.

I'd be looking for the referee and they'd be like, 'You're allowed to do that.' So, just little things like that I had to adapt to really.

Though he took the whole experience seriously, Williams felt his marker during the game against Convoy - not wanting to be shown up by a Gaelic football novice - took the game far more seriously than him.

The guy marking me, I tried a couple of times having a chat with him, but I don't think he was having any banter. I think he was taking the game far more serious than I was!

As the game went on, I think he got a little bit tired and we had a bit of a laugh and a joke afterwards, or during I suppose, saying, 'We'll have a beer after we've warmed up.'

He definitely didn't take it lightly on me. What I've found with these Gaelic footballers is they're quite proud sportspeople. They don't want anyone to get the better of them, as with any sport I suppose.

Even though it's an amateur game, they take it very seriously and almost play it professionally, and he definitely didn't want me to have the better of him, that's for sure. I had a couple of shoulders in the face and off-the-ball incidents, but as I was told in training, that's part of the game. I literally took it on the chin, I suppose.

The Toughest Trade will return to RTÉ2 tomorrow (Wednesday 1st March) at 9.30pm. Created by the long-time GAA Club Championship sponsors AIB as part of its #TheToughest campaign, The Toughest Trade explores how professional sports compare to the amateur GAA games.