The Toughest Trade returned for a third installment this evening.

The producers continue to spurn our idea of swapping Seanie Johnston with the Coill Dubh hurler who replaced him after 90 seconds of that Kildare league game five years ago.

But they presented us with something almost as good. The great Welsh winger Shane Williams stepped into Michael Murphy's shoes at Glenswilly in Donegal while Michael Murphy travelled to France to train with Clermont for a week.

We witnessed cameos from the likes of Tommy Bowe, Aurelien Rougerie and Morgan Parra. Here are 13 things we learned from tonight's installment. 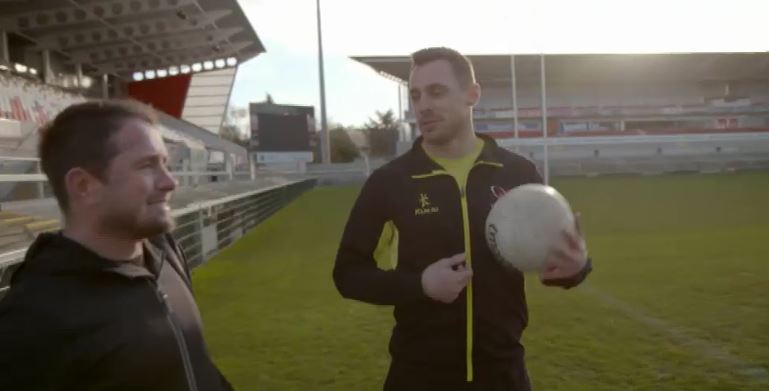 The Toughest Trade usually succeeds in cramming a bewildering number of star cameos into one hour of television. Tommy Bowe was first up here. He was idly soloing an O'Neill's around Ravenhill (how things have changed) when Williams showed up.

In 2008, Shane Williams scored the only try as Grand Slam chasing Wales beat Ireland 16-12 in Croke Park. In the process, he became the first Welshman to score a try in home of the GAA.

Now, he has achieved a more remarkable feat, becoming the first Welshman to kick a Gaelic football around Ravenhill.

We are unable to confirm this beyond (un)reasonable doubt. It must be true, however.

Bowe brags about his Gaelic football ability on Lions tours

An aside here. But Williams implied early on that Bowe has boasted heavily about his Gaelic footballing ability while on foreign tours. That's good to know.

Murphy had to adjust to the French hand-shaking routine 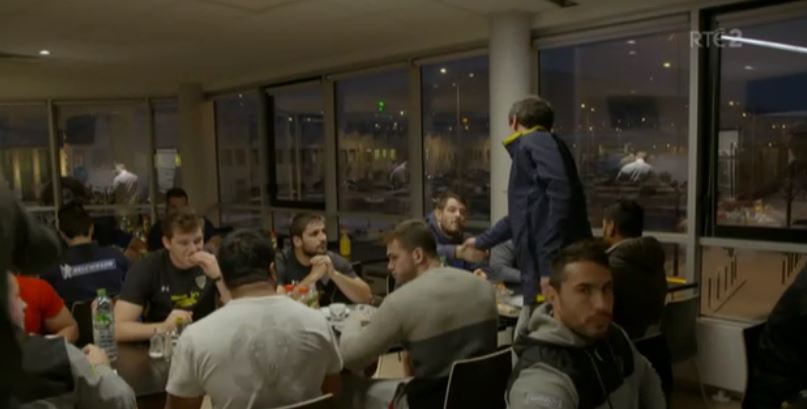 A few years ago, we learned that Joe Schmidt got all the Leinster players to shake hands with each other every morning. He may have learned that at his previous club Clermont. Apparently this is the done thing in French rugby.

Murphy strode around the canteen shaking hands with the entire playing staff, offering a "Bonjour" to each of them. Obligatory French tune was played even though the canteen in question was wholly characterless and could have been anywhere in the world.

"I'm really going into this quite blind. I haven't seen a game. I've seen a bit played on TV, usually when I'm in Ireland and I switch the telly on. Having played with the Irish boys, I knew it (Gaelic football) was a huge sport. I haven't a clue about the rules. But I didn't know all the rules of rugby union, to be fair, I don't think anyone does, so it doesn't really matter does it."

And James Haskell and Dylan Hartley are let off the hook.

Still not as good as the cars the Dubs get

Clermont were founded by the Michelin motor company. As a treat, Murphy was allowed zoom around their track in a blue car which originally looked like a Subaru Imprezza, but appeared, on closer inspection, not to be. 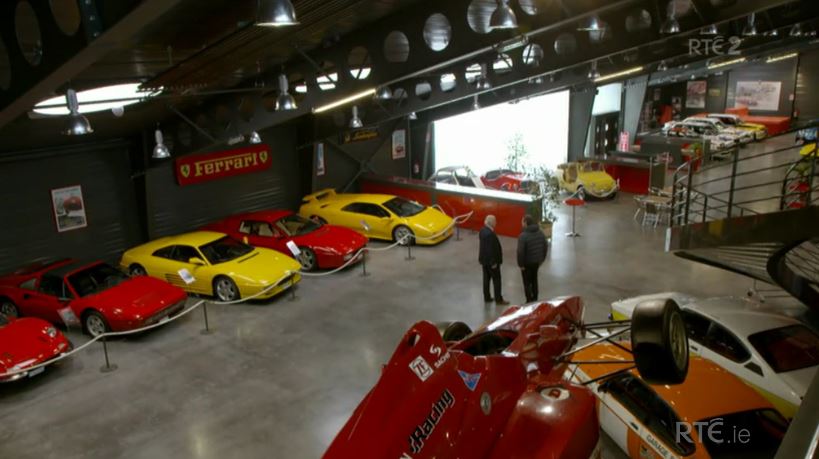 Murphy has a future as a food critic

"Some size of a steak" was his verdict on the steak he was served in a local restaurant. It came recommended by his eating buddy, South African lock Flip Van der Merwe. Crucially, he ordered a medium steak. He didn't pander urbanite, anti-GAA sentiment by ordering it well-done.

Williams has a future in the world of selling football boots

Having flailed around ineffectually in the world of professional rugby, Williams has at last found his calling as a salesman in a sports shop.

Better clipping frees off the ground than out of his hands

It's clear that Williams is a quick learner too. He worked out very fast that his free-taking coach Paddy McBrearty was "one of the best in the business." Another star cameo.

Williams suffered originally with the frees from the hand. As soon as he plonked them on the turf, he clipped one over.

Called 'Glenswilly's Call', it name-checked Shane Williams and was modelled on Ireland's Call. All who saw found it highly distressing. With the exception of Shane Williams who was chuffed.

Michael Murphy - King of the Offloads

In his full-contact game with the academy players, Murphy was extremely offload-happy. The Sonny Bill Williams of the North-West, is how they're referring to him in France.

We don't know that he's the first. Presumably, some Aussie Rules commentator has used the term when announcing on a compromised rules game or providing a bit of background on Pearse Hanley.

It's certainly far less objectionable than the Newsround presenter who tried to teach the youth of Britain about 'Gaelic soccer'.

Murphy's greatness under pressure applies in any sport 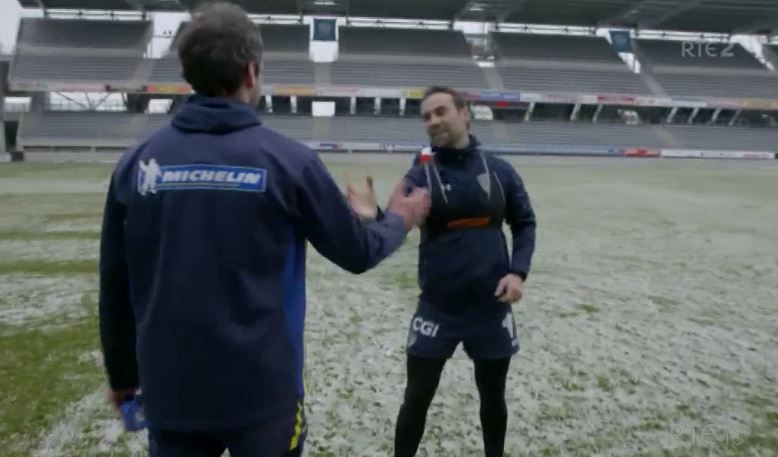 This writer knows a thing or two about kicking duels with rugby internationals.

He once successfully landed a drop goal, knocking it between the sticks of a goalpost mounted on a float on the Grand Canal, immediately after Conor Murray had missed three such attempts (that's a true story by the way. The small crowd of advertisers and curious members of the general public went wild).

Michael Murphy faced a duel with the wonderful Morgan Parra, France's former goal-kicker extraordinaire. At 2-1 down, he faced a kick near the touchline on the right to level matters. He smashed it straight through. 2-2. Honour maintained.

He got a kiss from Parra in front of the team at the end too.

"You'd make some Gaelic player out of him" 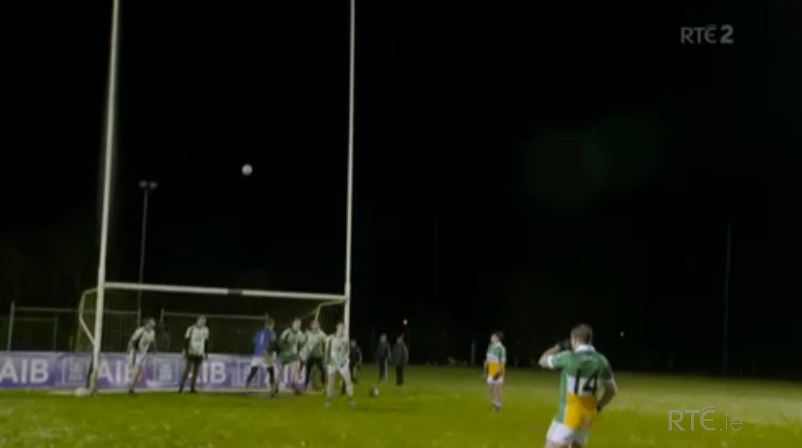 The conditions were horrible but Shane Williams's performance in that game against Convoy was a triumph. Williams, stationed at full-forward, kicked four points and harried and hassled the full back all day. He was nifty on the frees off the ground.

Read more: Ger Loughnane Warns That Hurling "Will Be Consigned To The Shadows" Under New Structure

GAA
5 years ago
By Balls Team
WATCH: "The Most Tiring Skill Session I've Ever Done" - Shane Williams Gets To Grips With GAA
GAA
6 years ago
By Gavan Casey
Watch: Ballyboden Promo Encapsulates What The Club Football Championship Means To Players
Previous Next

GAA
5 years ago
By Balls Team
WATCH: "The Most Tiring Skill Session I've Ever Done" - Shane Williams Gets To Grips With GAA
GAA
6 years ago
By Gavan Casey
Watch: Ballyboden Promo Encapsulates What The Club Football Championship Means To Players
Popular on Balls
Football
1 day ago
By Eoin Harrington
'Ronaldo Is A Cod' - Remembering Eamon Dunphy's Infamous 2008 Rant
GAA
16 hours ago
By PJ Browne
The Draw Has Been Made For Tailteann Cup Opening Rounds
GAA
1 day ago
By PJ Browne
Donal Óg Cusack Defends Dublin Hurlers After John Mullane Criticism
The Rewind
2 days ago
By Eoin Harrington
Watch: Brilliant Dermot Morgan Dublin Segment From 'The Travel Show' Resurfaces