Inter-county hurling is finally making its return this weekend, and it will be accompanied by some new rules in the sport.

The one that has drawn the most attention is the introduction of a sin bin, something that has been brought in to try and combat the rampant cynical play in the game in recent years.

Under the new rule, the tripping, pulling down, or careless use of the hurley to foul an opponent and stop a goalscoring opportunity will be punished by the awarding of a penalty, as well as a ten minute period in the sin bin for the offending player.

It has certainly split opinion in the sport. Some traditionalists feel the game should be left as it is, while other feel it is an important step to take in order to bring more excitement back to hurling.

Speaking on RTÉ ahead of Limerick's clash against Tipperary this evening, Henry Shefflin and Anthony Daly had mixed feelings on the rule. The former Kilkenny star was clear in his feelings that something needed to be done:

What do Henry Shefflin and Anthony Daly make of the new sin-bin rule?

The word that's not there is 'cynical', and this is to stop cynical play. I think there was more and more of that creeping in.

Video analysis, reviewing games, coaches talking about 'you should have taken that player down, why didn't you stop him at source', I think that is what has led to this.

I think the big thing for in that is that it's for a 'goalscoring opportunity'. We were talking about it in the last couple years, that there's not enough goals in the championship. What is happening is that the cynical play is stopping those goalscoring opportunities, so I think it is right and just.

However, while largely agreeing with his fellow pundit, Anthony Daly hinted that he thought that the awarding of a penalty may have been punishment enough.

We totally agree that there has to be a penalty for that (cynical) tackle. Has there to be ten minutes in the bin? Would that have mattered to Adrian Tuohy in that incident there? Not an iota...

I think with the cynical element, Henry is right.

There were a few things last year. I know he won't thank me for saying it now, Danny Sutcliffe was one on Paddy Purcell.

They were ones we didn't like: they're deliberate, there's a chance of a goal on, so I'm going to stop him. 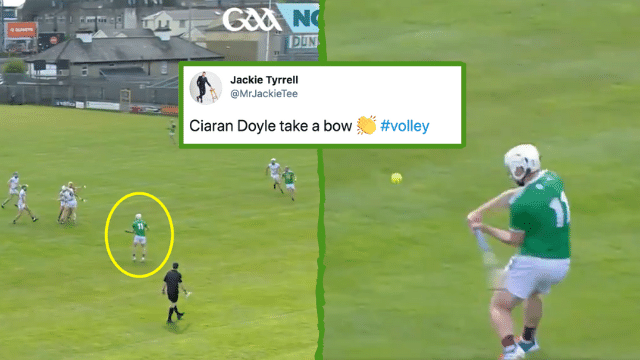