The weather wasn't exactly what you'd call temperate in Carrick-on-Shannon on Saturday afternoon, but the heat was undeniable. It was a heat that the thousands of Gaelgeoirí present may have described as being brothallach. A bit close. Sweltering. A stifling bubble that drew striking parallels with the match itself.

It was a fever that pressed in from many different fronts.

From the far west came the hot gale of legacy. 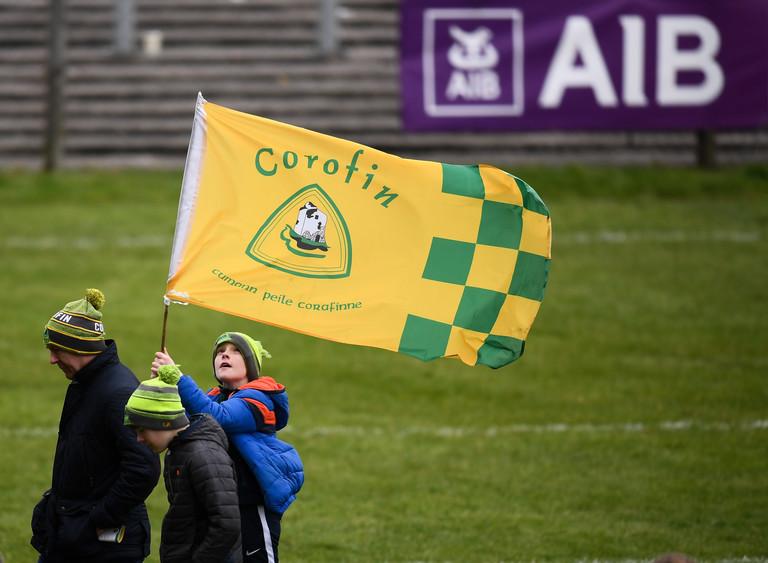 Despite bestowing on their people many gifts over recent seasons, the players of Corofin shouldered a burden of mounting expectancy. An expectancy to win on the day was only dwarfed by an over-arching expectancy to perhaps take that final step into the pantheons of the club game in winning back-to-back All Ireland titles. Granted, it's something not handy done. 47 editions of club football's premier competition have come and gone and still only three side's have been able to pick themselves of the pub floor to come and hammer home their superiority the very next year.

From the north came an altogether different heat. A front fired by passion, a front fired by pain. For Gaoth Dobhair, Saturday's encounter played out against the backdrop of a higher importance than simply thirty lads running around on a field after a stitched piece of leather. Community, language and that raw sense of tragedy brought about by last month's loss of young Micheál Roarty darkened the clouds over Avantcard Páirc Seán Mac Diarmaida,  Niall Friel's emergence at the head of a weaving green and white snake of bodies from the underbelly of the main stand,  saw those clouds send forth an a thunder bolt of electricity that would crackle throughout the contest.

In many ways, the fact that Corofin delivered a measured performance, doing just about enough to hold their opponents at arm's length in a four point victory, meant that both teams returned to their respective parishes content with their work. The march to immortality continues for the Connacht men, whilst Ulster proudly toasts a group of players who have felt the full ramifications of dizzying highs and the most soul destroying lows, on-and-off the field either side of Christmas. Quiet equilibrium - David Brady aside - exists. But before turning our attention to St. Patrick's Day and Corofin's tangle with Dr Crokes, it's right that last word should go to two elder statesmen, who despite having more than 70 years between them, were able to assertively grab a pulsating, if at times slightly nervous and error-ridden semi-final, and put some manners on it.

Shut the fuck up im not even a midfielder ans I would still take you to the fucking cleaners you muppet and I would ram that basketball armband up your arse. My club my people 💚💚💚

It's no secret, of course. Gary Sice and Kevin Cassidy, whether they like it or not at 34 and 37, had taken on the role of heroes for their respective teammates, long before many of them had even held a size five. One more time, these two seasoned warriors placed themselves front and centre of each side's battle charge in Carrick. One more time they produced heroics.

Sice's assured consistency in slotting seven points from dead balls, as well as delivering the perfectly weighted dink to the square that would eventually lead to Martin Farragher's goal on the stroke of half-time, struck a contrast with his Donegal counterpart's brutish brilliance in grafting two points of fantastic quality from play, on a day where Cathal Silke and older still Kieran Fitzgerald made things more or less impossible for himself and Eamon Collum inside. However, it was the similarity in the goals that each veteran would grab , that would underscore their true value to each team.

Call it nouse, call it anticipation, call it what you like. It was no accident that both men happened to be perfectly positioned to finish to corresponding nets within mere seconds of each other in that exhausting first half, after goalkeepers were only fit to parry initial efforts.

It was those two moments of coolness that underscored just why Sice and Cassidy, or any legend pushing on in years, continue to be pivotal cogs in that heat of club football. Whilst days of physically dominating affairs may be long behind them, those moments of clarity when less experienced others are making the little mistakes brought on by that heat, by that closeness, are invaluable when the dust eventually settles on any match.

On this occasion, it would be Sice who would come out on the right side, but Cassidy's hero narrative will survive in the shadow of Mount Errigal for many's a day to come you would imagine. His thunderous almost paternal defence of his team in light of Brady's brainlessness served only to cement that notion.

From one literary powerhouse to another, and the words of fellow Ulsterman C.S. Lewis to end, taken from his fantasy novel "The Lion, The Witch and The Wardrobe".

Some day you will be old enough to start reading fairy tales again.

Sice and Cassidy continue to be the living proof of that.