Cork Ladies footballers are a machine. Of that there is no doubt. For the sixth year in a row and the eleventh time in twelve years they climbed the steps of the Hogan Stand to collect the Brendan Martin Cup.

Journalist Mary White had a brilliant insight this morning into the will to win that there exists in this extraordinary team. She outlined how the indomitable Briege Corkery - alongside Rena Buckley, owner of sixteen All Ireland medals before yesterday's win- stood up and delivered a sensational speech. The speech galvanised the Rebelettes and as a result they came out and overturned yet another half-time deficit against Dublin in an All Ireland Final. 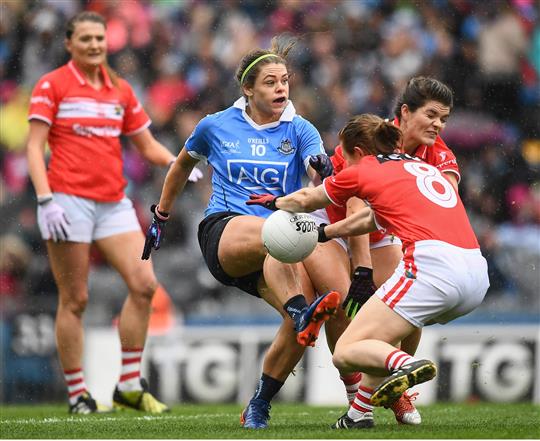 Holding two photographs in her hand just before the team headed back onto the field Corkery put their choices in stark relief. White reveals what happened next.

The first snapshot she places on the floor is that of a crumpled Juliet Murphy lying on the turf in Banagher in 2010. The former Cork captain’s chin is tucked into her chest. Torn. Distraught. It’s the 2010 All-Ireland quarter-final loss to Tyrone; the only defeat Cork have suffered in the All-Ireland series since 2005. Corkery doesn’t want to go back there, and she’s not going to allow her teammates go there either.

The second snapshot Corkery face-plants onto the wall seconds later is from Cork’s 2014 comeback against Dublin two years earlier. Ten points down with 16 minutes to go, Eamonn Ryan’s troops came from hell and back to win by a point. This time the snapshot is of goalkeeper Martina O’Brien jumping in the air at the final whistle. The time is now, the feeling is now, and Corkery reminds those bunkered down in dressing room 2 what it’s like to feel elation again. She’s just shown them.

She felt the heartache of defeat two weeks ago with the Cork senior camogie team, and she’s not in the mood to feel it again.

Upon passing O’Brien’s winning emotion on the wall as they walk back out onto the pitch, the Cork players walk into another win in Croke Park — their 11th — and with it a new era under manager Ephie Fitzgerald.