Despite the absence of her inter-county teammate Niamh McEvoy, listed amongst the substitutes but held in reserve throughout, the firepower of Aherne offered Sylvesters a decisive edge over their Ulster rivals.

Kinawley skipper Joanne Doonan emerged with an impressive tally of 1-3 but it is the Leinster champions who progress to face Castlebar Mitchels in the forthcoming showpiece.

The hosts enjoyed a dream start to this contest as Aherne rattled the back of the Kinawley net with just over 60 seconds gone on the clock. This was a taste of things to come from Sylvesters and the Dublin holders subsequently doubled their lead in the seventh minute.

Following a blistering run from another Dublin star, Nicole Owens, Emma Sullivan fired home clinically for her side’s second goal. Kinawley got up and running with back-to-back points courtesy of Shauna Melanaphy and captain Joanne Doonan, but Sylvesters responded with points of their own from Aherne and Sophie McGlynn.

Owens had a goal disallowed just shy of the first-quarter mark and their Fermanagh counterparts received a significant boost when Aine McManus shot beyond the reach of Sophie Brennan for an 18th minute goal.

However, Aherne immediately responded at the opposite end with another emphatic finish to the Kinawley net. She finished the opening period with 2-3 to her name and with Sylvesters establishing a 3-7 to 1-3 interval cushion, they were on course for a place in the national decider.

Already well served in attack, the 36th minute introduction of Katie O’Sullivan added an extra dimension to the Sylvesters play. After Grace Twomey and Aherne had scored points either side of a successful Doonan free, O’Sullivan grabbed their fourth goal to move the Malahide outfit 4-8 to 1-4 clear.

To their credit, Kinawley kept plugging away and Doonan displayed great composure to fire past Brennan for a goal on 46 minutes.

This was only a minor speed bump for Sylvesters, however. Katie O’Sullivan and Kate Sullivan added to their respective hauls in the closing minutes to ease the north Dubliners to a commanding victory. 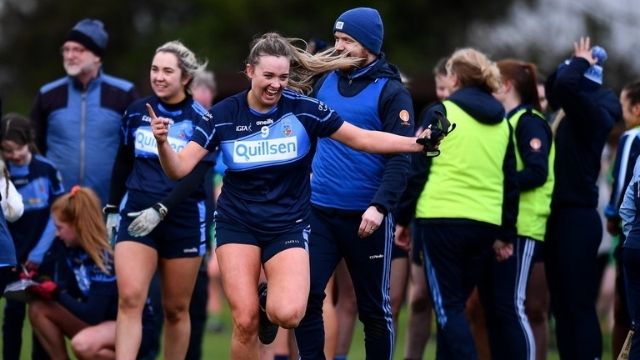