Stephen Rochford believes that Niall Morgan should have been named Man of the Match in Saturday's All-Ireland final between Mayo and Tyrone.

The Tyrone goalkeeper kicked three points, two from frees and one from a 45, along with making major contributions through his kickouts and ventures out the field.

"At different times in the past, Niall Morgan might have been a bit rattled when he made an error," former Mayo manager Rochford told Balls.ie's GAA Embedded show.

"His very first kickout, he didn't get it outside the 21, but from then on, he was impeccable. His long distribution, both from hand and foot, was well-orchestrated."

Morgan received some criticism for his performance against Kerry in the semi-final. That is criticism which Rochford felt was undeserved.

"Two things were different from the Kerry game," said Rochford.

"I was at the Kerry game, and maybe there are things that you don't pick up on television. The Kerry team, including Shane Ryan and Tom O'Sullivan, were pushed up to their own 45. The space just wasn't there as often as you'd like.

"And, Kerry absolutely cleaned them out on breaking ball. That didn't happen yesterday. There was an early phase of play in front of the Hogan Stand, he went long, and Mayo had three players under the breaking ball, and still Kennedy got it out to Kieran McGeary, I think."

Tyrone forward Darren McCurry, who scored 1-4, was named Man of the Match by RTÉ.

"Niall Morgan was Man of the Match for me," said Rochford.

"He played as a sweeper. The one that he came out and won [the ball], drove up to the 45, spotted McKenna at the edge of the D, accurately - it wasn't a hit and hope. He spotted that there was a potential mismatch.

"Even on the short kickouts, when they got away, if they went to Peter Harte or Kieran McGreary on it, it went back to Niall Morgan as the Tom Brady of Tyrone.

"He just managed that phase of play on all their restarts. I thought he was super. He's probably got ahead of Robbie Hennelly for that All-Star." 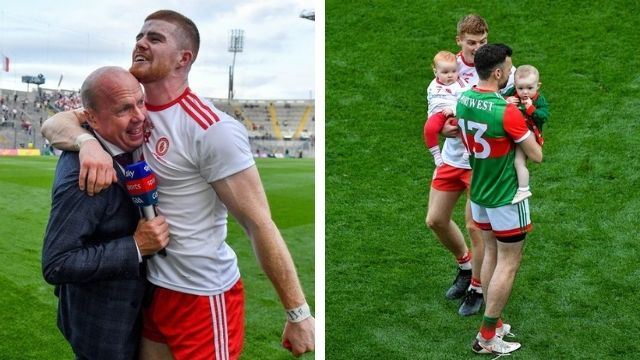