How TG4 And Nemeton Bought Us GAA Redzone

Days like Sunday make the stormy ones from late January and February, when they were getting constant messages telling them to dry the lens or earnestly suggest they should install wipers on the camera, more bearable for those who bring us live GAA on TG4.

It was a day which not only saw TG4 broadcast the drama from Clones, as Monaghan defeated Dublin and kicked them down a rung to Division 2, but also make clearer what was going on elsewhere amid uncertainty about which teams would drop out of Division 1. Interspersed throughout the main game were major moments from Donegal against Armagh and Mayo's clash with Kildare. It was the type of televised GAA coverage many had wanted to see for years.

A week earlier, for the final round of the hurling league, TG4 had debuted the GAA version of NFL Redzone, the broadcast which whizzes around American football games on a Sunday showing big plays seconds after they've happened.

The last day of the hurling did not provide a spark, but the broadcast went well. They were able to make some tweaks for the football league's final day pyrotechnics.

What a day today on #GAABEO drama and action to the end. Amazing work by all at @nemetontv @TVM_ie @SportTG4 and all the freelance crew. pic.twitter.com/tMnKbR8aLI

"We had our main OB (outside broadcast) in Nowlan Park," Maidhcí Ó Súilleabháin, director of GAABEO at Nemeton TV, tells Balls.

"Most of the crew was there, and then we had the slave game up in Clones for the Dublin vs Monaghan game.

"Then we had single cameras up in Letterkenny [for Donegal vs Armagh] and in Carrick-on-Shannon [for Mayo vs Kildare], and they were supplying us with live pictures into the OB in Nowlan Park.

"We were able to record all those and get a feed in from those games. We had a producer sitting across each of those two single camera feeds and they were keeping an eye on those.

"Mike Ó Domhnaill was presenting it and doing his best to keep people in the loop of what was going on. He's watching multiple feeds on the screen - the incoming games, the program feed, and me, the director, or whoever is talking into his ear trying to tee him up for what the next score is.

"We had the league table on air. We had another producer, Miriam, across that frantically trying to get the latest scores updates and updating the tables. It's a real team effort now to get it all together and get it all up on screen."

The Covid-19 pandemic, and the paucity of GAA action which it caused, gave Ó Súilleabháin and his Nemeton colleagues time to think how they could add value to their coverage. Specifically, they knew there were opportunities with the last rounds of the leagues.

It was then about getting the technology in place, and making decisions about the details. They could have done it Soccer Saturday-style with people in a studio watching the games and talking viewers through scores, reds cards and penalty misses. Instead, they deployed Micheál Ó Domhnaill - who was at Nowlan Park for the later broadcast of the Waterford vs Wexford hurling semi-final - as their Scott Hanson. 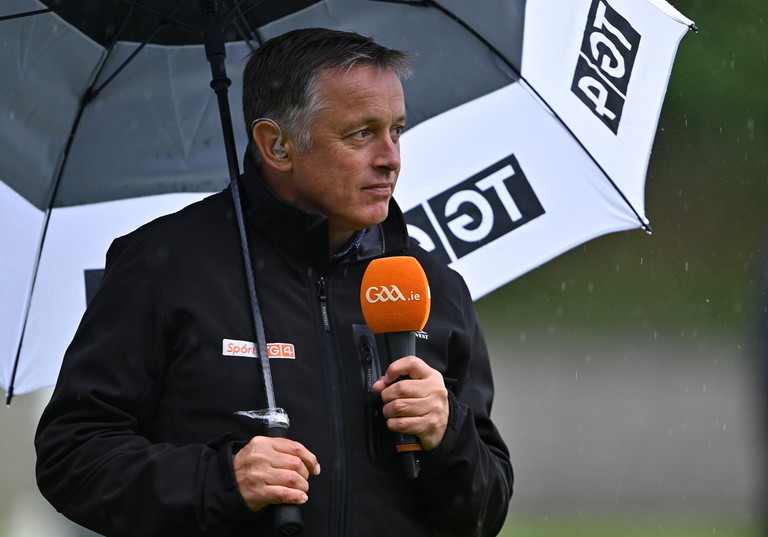 "What we have been developing in recent times is the ability to do single camera streams from various different venues for a lot of the TG4 games," says Ó Súilleabháin.

"There could be minor games or under 20 games that we can stream with a single camera. Traditionally to get live pictures out of a decent broadcast quality, you're talking about sending a satellite uplink there.

"Now there's a little box that can basically stream over the mobile networks and it combines various different mobile networks together to give you a little bit of confidence that if one goes down, it carries on the other.

"We were using that technology to stream those two games from Letterkenny and Carrick into Nowlan and then turn them around and put them out on air on TG4.

"We're constantly talking about how we can make improvements and bring innovations and do things a little bit differently. We're all sports fans, we watch all sorts of sports, the NFL Redzone obviously was an influence on that, and baseball have a version of it called the Big Inning.

"It was built on stuff that we had done before like the picture-in-picture replays or the tactic camera. This was another level just to make a real kind of Super Sunday entertainment for the viewers."

Later in the year, during the club season, there is a chance we may see another Redzone-type broadcast.

"TG4 have one channel at the moment, like, but if you were to do a Redzone type thing, where do you show it?" says Ó Súilleabháin.

"Does it live online? Does it live on YouTube? On a Twitter stream, where you're getting six or seven different games, and you're turning them around. You will have your primary game on your linear TV channels. The next evolution there is to get and develop the platform for that.

"Maybe looking to the club season, there may be opportunities to expand it there, but certainly for next year's league then we'd be looking at that again to do a bit more on it."

The ability to shoot games using a single camera, and the increasing reliability of internet connectivity, means we will see TG4 streaming a lot more games from this year's minor and U20 championships, probably on their YouTube channel.

Another innovation Ó Súilleabháin would love to see is the option for viewers to choose the angle from which they watch games. What would make it all easier - especially during the rainy days of the league - is better facilities at grounds.

"I think we just had a really bad run of weather in the middle of the league," says Ó Súilleabháin.

"We were getting hit right left and centre by various different storms that were coming across on Sundays.

"We do scaffold bills when there aren't camera positions in a venue, and they can be exposed to the elements - there's no kind of getting away with that.

"Our camera operators were going through some amount of cloth to keep the lenses dry. But what can you do? The rain's coming in, it's coming in like sideways into the lens.

"They do their best to keep the lenses dry. What the viewer at home doesn't see quite often is that every time is that camera is not throwing up a live shot, they're wiping the lens, and we get messages saying 'Can you wipe the lens?' They're being wiped every 20 seconds. It just gets rained on again immediately.

"It's a credit to the camera operators and the people on the ground that they can get through the bad weather days, and keep bringing the good pictures as best we can on those days.

"It makes the great days like we had on Sunday all the better." 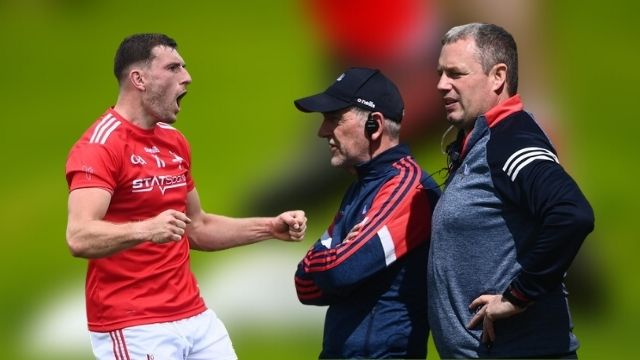 GAA
1 week ago
By PJ Browne
Mayo's Padraig O'Hora Using Football To Promote His Real Passion
GAA
1 week ago
By PJ Browne
'I Get Stick From The Kildare Lads For Going Over To Laois!'
GAA
2 weeks ago
By PJ Browne
Canning Explains Why He Had To Turn Down Shefflin's Galway Call
Popular on Balls
Football
7 hours ago
By Eoin Harrington
Juan Mata Questions Manchester United Management After Dire Season
Golf
2 days ago
By Gary Connaughton
Padraig Harrington Glad He Didn't Have To 'Make A Decision' On Saudi Golf League
Football
1 day ago
By Gary Connaughton
The Frank Lampard Love-In After Everton's Survival Was Downright Bizarre
GAA
2 days ago
By PJ Browne
'It Came At An Awkward Time. I Didn't Think It Would Be So Bad'