The Brilliant Story Behind The UCC Skull And Crossbones, AKA The Best GAA Jersey Ever

This story originally appeared on Balls.ie in February 2016 but has been updated with some new information

Here we are amid the height of colleges GAA season and again we must genuflect before the greatness of the UCC skull and crossbones jersey.

For those who are unfamiliar with UCC sports, the skull and crossbones is something seen only during Fitzgibbon/Sigerson season and remains the envy of all GAA jersey-wearers. Its origins always seemed mysterious. Was it an homage to Barbary pirates? A reminder to all opponents that they will some time shuffle off this mortal coil? Given the utter lack of imagination in most other GAA jerseys, the UCC jersey is unusual and daring.

We're delighted to have finally discovered the true, and long, history behind the skull and crossbones, after picking up 'Where Finbarr Played', a history of UCC Sports by John A. Murphy, which was published in 2011.

It turns out that the skull and crossbones have been seen at UCC as far back as 1880-81, though it was not the propriety of the GAA teams in those days. In late Victorian times, UCC was mostly a medical school and the junior doctors who played for the school's rugby club, fittingly, used a skull and crossbones as the symbol of their team. 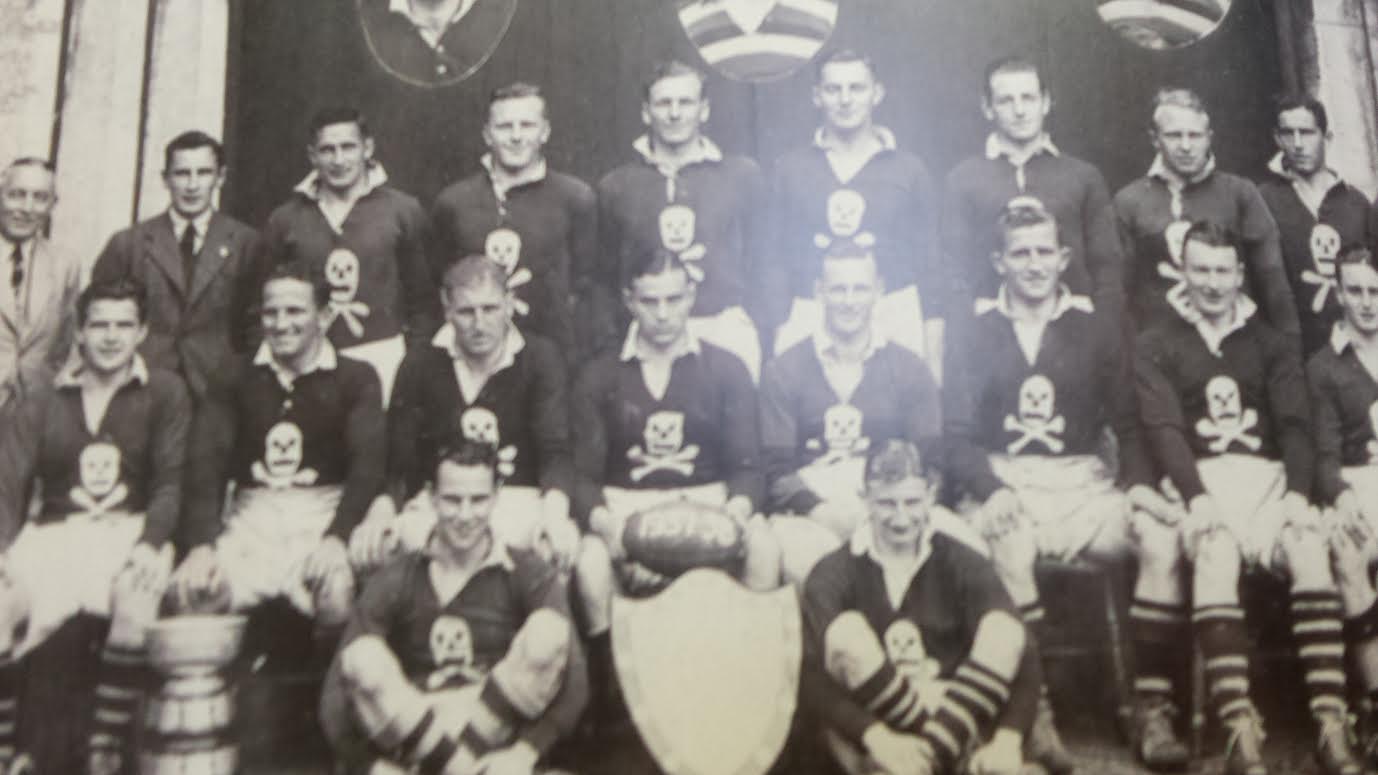 Over the years, Murphy writes, the skull has sometimes had teeth and sometimes hasn't, but the rugby club more or less refused to share the skull and crossbones with other UCC sports teams. It wasn't until the late 1920s that the college's other sports teams donned the memento mori. 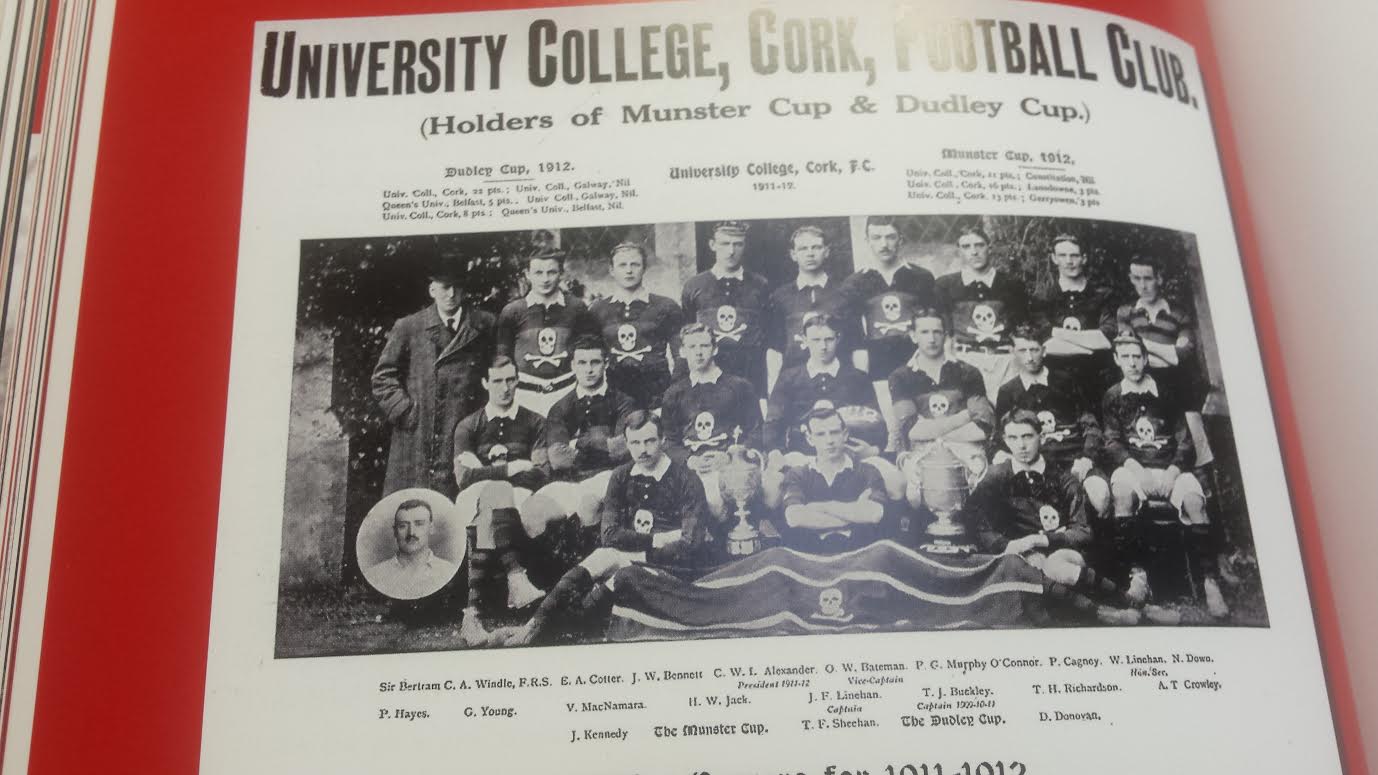 Brilliantly, UCC's hockey teams have been wearing the skull and crossbones since at least 1929, assuring that they had the most badass uniforms in 20th century Irish hockey. The skull and crossbones for the 1934 team, pictured below, was sewn in white leather and black ink by Madoline O'Connell, whose pictured 4th right on the botoom. 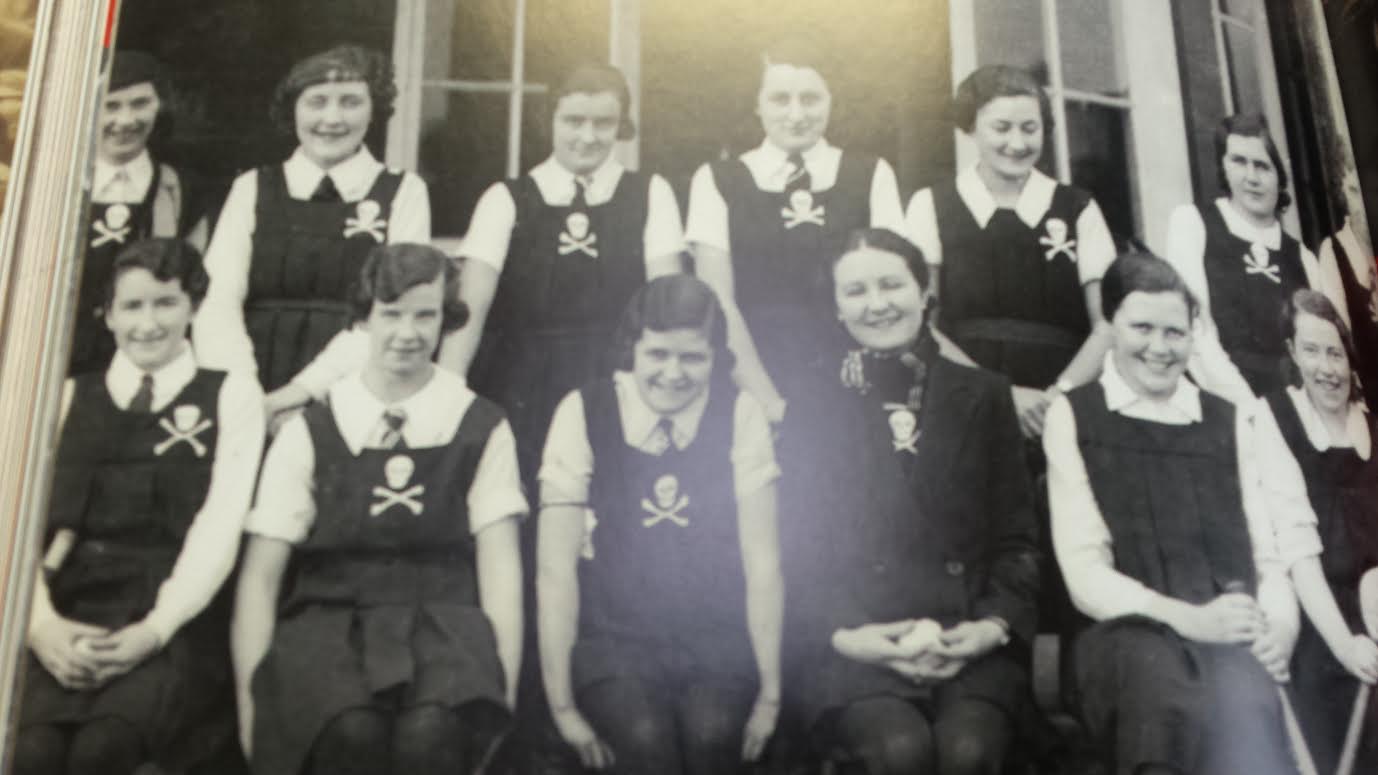 In 1999, UCC copyrighted the skull and crossbones.

Murphy's book also includes an anecdote about UCC's famous Sigerson win in 2011, where injured captain and Kerryman Adrian Greaney gave an 'Any Given Sunday' style speech and famously drew the skull and crossbones on his plaster cast.

After publishing this story, we received the following correspondence from a Cork reader with another theory on the UCC jersey:

I think there's another element to your UCC Jersey story that has been missed. I can't remember where I read it but the Bertram Windle Building in UCC houses the medical lectures on campus and has done since the 19th century I believe. The Kane building stand behind the medical building, on the site of the old gaol.
The story goes that unclaimed bodies from the gaol were sent as cadavers to the medical building, in bags marked with the skull and crossbones - the genesis of the rugby club logo.

Could anyone knowledgeable in UCC history substantiate this?
Balls.ie · The Buildup - Kevin Doyle On Endless Manchester United Excuses

GAA
3 years ago
By Gavan Casey
It's Time To Banish The 'Rebelettes' Moniker: The Cork Ladies Are Pure Rebels
Football
3 years ago
By Darren Holland
Who's Older? The Surprisingly Tricky Cork Sporting Icons Quiz
Previous Next

random
3 years ago
By Conor Neville
10 Of The Best Managers That Cork Has Ever Produced
GAA
3 years ago
By Gavan Casey
It's Time To Banish The 'Rebelettes' Moniker: The Cork Ladies Are Pure Rebels
Football
3 years ago
By Darren Holland
Who's Older? The Surprisingly Tricky Cork Sporting Icons Quiz
Popular on Balls
Premier League
20 hours ago
By Gary Connaughton
Roy Keane Believes Pressure Is Mounting On Solskjaer After Poor Start To Season
1