Neil McManus had some great days in Casement Park. He often made the trek down from the North of Cushendaal to Andersonstown Road with his father, a man who was educated in this historic ground.

He's watched and played in monumental Antrim hurling matches. Walsh Cup wins over Offaly, Ulster final wins over Down, hard-fought club and provincial titles. But those are not his favourite memories of this now desolate stadium. 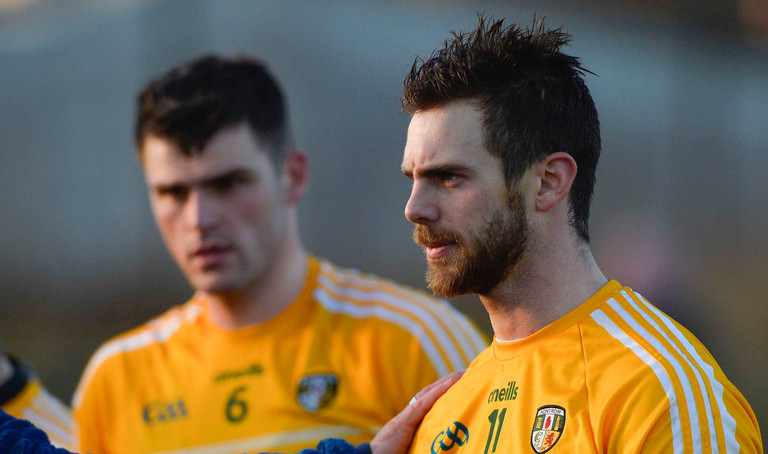 His favourite memories are the evenings after work when he'd stroll down West Belfast to be warmly greeted by passing locals, who recognise the county star from his exploits on that very field. A brief dip into the district store which sits perched across from the gate would soon follow before he'd call in and chat with Antrim kit man Jim, and finally, head out to practice frees.

Upon finishing Jim would have a bacon butty ready and the pair would sit and look out at the carpet-like field with the Black mountains towering in the distance. Looking out on their home.

Now he stands on the west bank and looks at Casement's broken concrete and weed-invested paths. A decrypted corner with a carpet of underbrush stretches down to where goalposts should be. A few long pucks away lies Belfast city.

Standing alongside him is Jim, still there, but unable to greet anybody. The field is unplayable and the stand unsafe. For six years, they've had no home.

"To see it in the shapes that it's in currently, it's heartbreaking for all Antrim Gaels, to be honest." The Cushendall club man declares with a sigh.

It's slightly embarrassing, we don't have a home. Antrim GAA is a well-renowned hurling and Gaelic football county. I get asked on a weekly basis, what's happening with Casement Park Neil? I don't have the answer yet because we're still in limbo.

It was supposed to be the pride of a county and a province. A state-of-the-art 34,500 capacity all-seater venue. Some local objections stalled work. Then the lack of a Northern Ireland Executive slowed the project to a halt. The result is that this stadium is scarce, as is the GAA's presence in the city.

Finally, last year measures were taken to arrest that slide. 'Gaelfast' was launched to rejuvenate GAA in Belfast. It's a worthwhile project the area sorely needs, but McManus is certain Casement is key to all of it.

We have seen the decline of Antrim, how well it has tied in with the demise of Casement Park is the only reason you need for the redevelopment of this ground. We need this for Belfast, for West Belfast, in particular, to happen right away before we lose the potential being generated by Gaelfast in this city. This is our flagship stadium, this is our home. We need it.

This is home to over 350,000 people. It's the second biggest population base in Ireland. GAA is dying in this city and Casement Park would play a huge role in regenerating this area and putting life back into Gaelic games in Belfast. 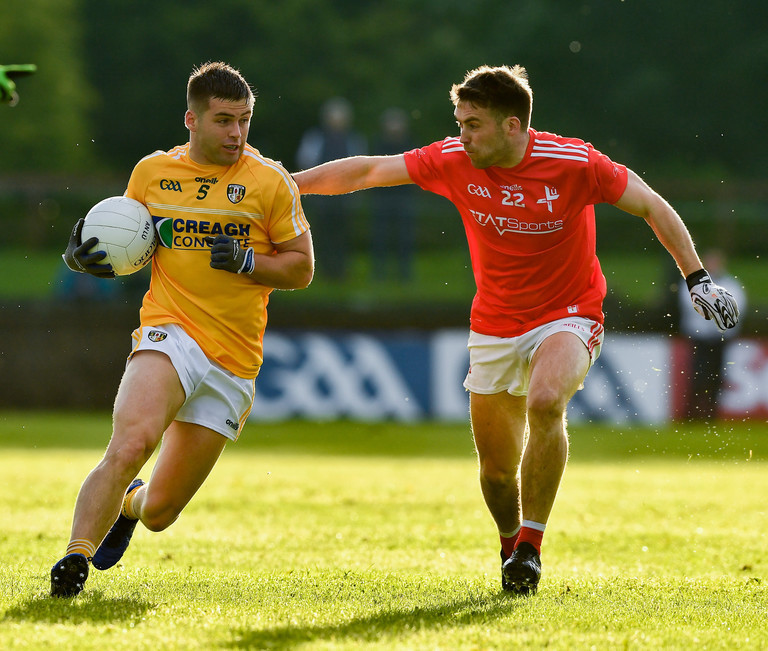 Patrick McBride also knows what it's like to play in Casement Park. He walks it now and silently shakes his head, a transformation almost impossible to digest. 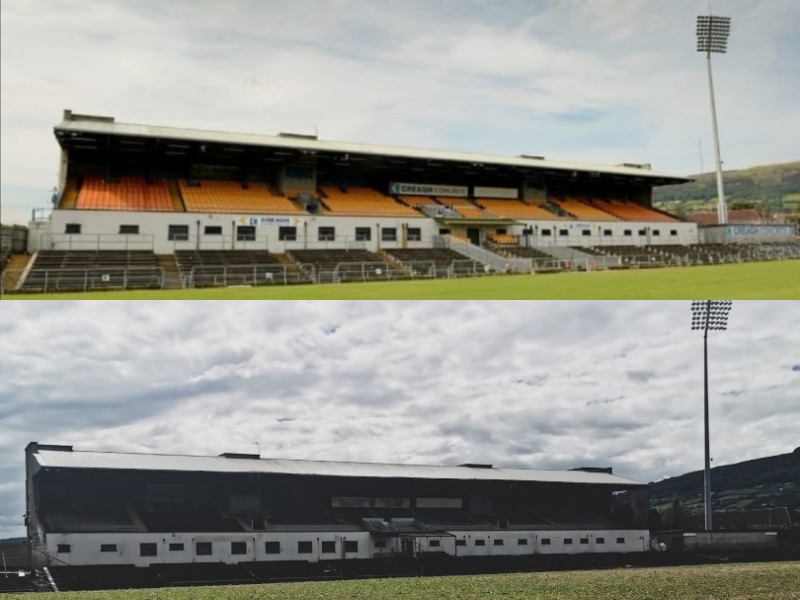 Antrim's round 2 Qualifier against Kildare will take place in Corrigan Park, Whiterock Road, McBride's local club ground. Already this year they lost home advantage and had to play Tyrone in Armagh's Athletic Grounds in the first round of the Ulster Championship. He was particularly keen to maintain some sort of home advantage this time around.

At the same time, that is St John's ground. It does not belong to Antrim. The players know that too.

"We have a home venue in St John's, that's my local venue. It's nice to play there but at the end of the game it's a stadium you want to be playing in," he says, before gesturing towards the corrugated iron stand laced with a deteriorating net.

For Antrim GAA as a whole, it is detrimental. Anywhere you go or any county, a game generates a buzz, an atmosphere and we haven't had that in previous years. The buzz isn't the same. I remember coming to play a minor game against Tyrone and the seniors were playing after.

The buzz about the road was unbelivable, Saffron and Tyrone jerseys everywhere. It was great for kids and the community to be part of it. When we went to Armagh to play Tyrone, it didn't feel as if we had a home.

Whatever about the current crop, there is another group in serious jeopardy due to the ongoing saga.

"We've lost a generation. Not completely lost but... There are kids who haven't even seen Antrim play. They don't know about it because nothing has generated their interest, they've never seen anything happen here.

"Years ago for a Championship game, the whole place was alive, the shops and the streets. Anyone could've seen it and say 'I wouldn't mind playing here someday.' If it was a Féile or a club game, the lights would be on and kids could look up and see them, decide to go watch a match.

"This is something to inspire the youth. I played here and still dream about playing more. We could've had a lot more participants and more interest. We need it resolved, now." 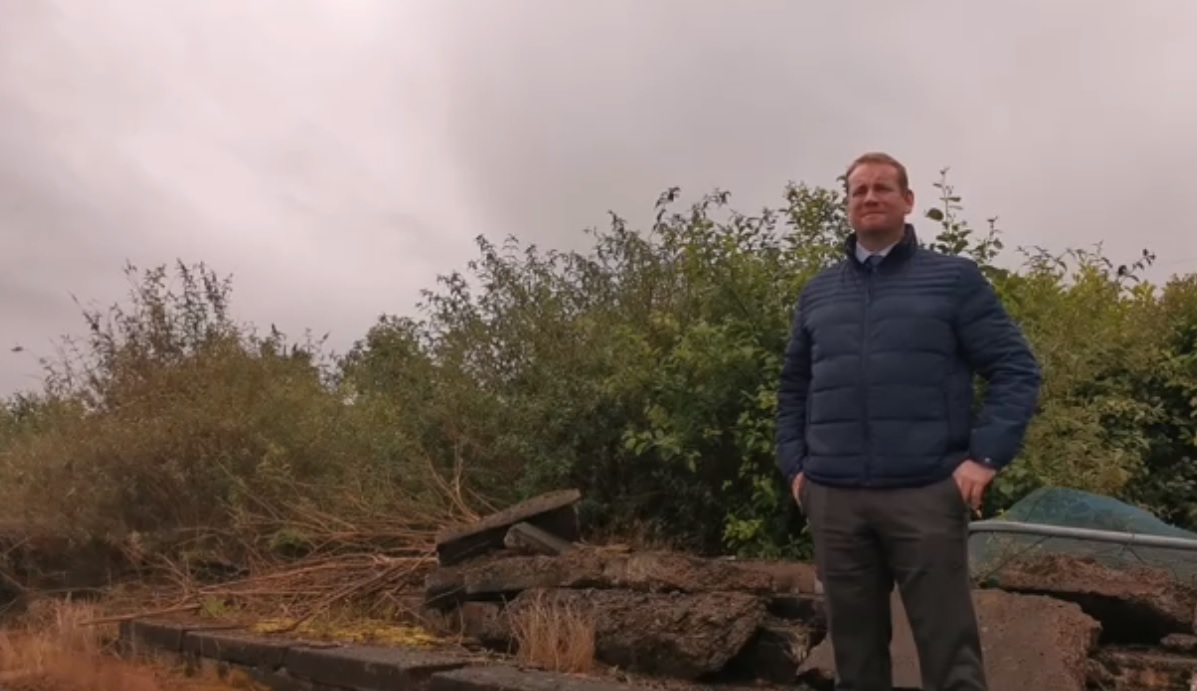 Andy McCallin is a fellow club-mate of McBride. He's been a staunch Antrim supporter all his life and he'll be a steward for the qualifier game in Corrigan Park. His family are steeped in Casement Park. Every day his father looks out on it from his balcony right alongside it. For the stadium's first official game his grandfather was the referee. They're still there now, on the outside looking in.

"My family live close to the ground. It's within walking distance which is probably why they bought the houses!" 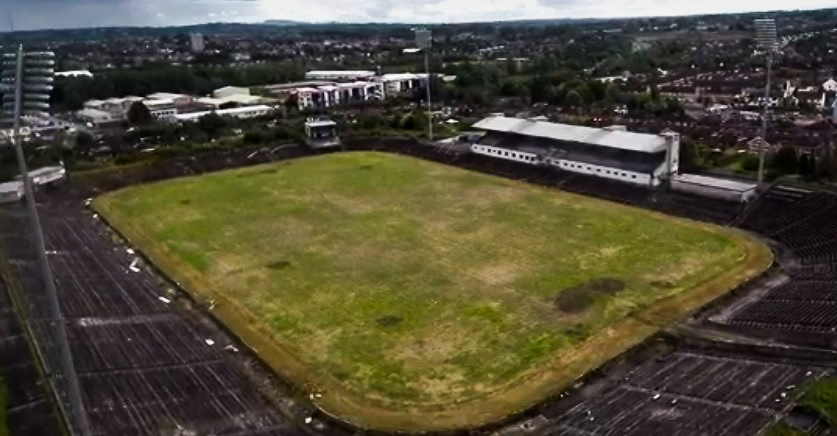 Recently McCallin took it upon himself to coordinate the 'Love Casement' social media campaign. It became a collection of past memories, a celebration of all Casement Park was and can be.

Too many people were being negative about the situation. A lot of what is going on is beyond the lay person's hands. I thought it was best to try to stay positive and get memories of what this represents. Myself and Jane Adams, who is a former Antrim camogie player, got involved in Love Casement to reflect the emotional attachment. I was flabbergasted by the response.

There are people who met their wives in this ground, who fell in love here. People who refereed here, people who came from all parts of Ireland to be here.

People who emigrated and when they come home they visit here. There are people who went to school here, that stand was a school back in the day. This place is full of stories, it's more than bricks and mortar.

"We need to get more kids playing our games, we have the best games in the world as far as I'm concerned. Gaelic football, hurling and Camogie. We've so much potential here in Antrim. What better place to advertise your game than in a state of the art facility."

If Casement Park is not granted planning permission by 23 August this year, the entire project is back to square one. It's an outcome unthinkable to the county's GAA community and one they are desperate to avoid.

A resolution is vital, as McCallin explains. Without one a displaced and dwindling community will continue to struggle.

"This is our home, and Antrim doesn't have a home at the moment."