This weekend felt important in the ongoing national debate on Dublin's dominance over all counties in gaelic football. After the Dubs comfortably decimated Cavan on Saturday evening, the conversation in all GAA circles again turned to Dublin's threat to the very competitiveness of intercounty gaelic football. 'The golden generation' theory to explain Dublin's success is crumbling as a team shorn of Jim Gavin and his braintrust, Jack McCaffrey, Diarmuid Connolly and Bernard Brogan seem stronger than ever. Colm Cooper said we were at a 'tipping point' last night on RTÉ. We have been building to this point for years, and there's a responsibility on the media to host fulsome debate with credible solutions to this glaring problem in the sport.

Colm O'Rourke and Tomás Ó Sé got the ball rolling on Saturday evening after the match. There was a bit of excitement on social media when RTÉ revealed yesterday that Pat Gilroy and Andy McEntee would be in studio on the Sunday Game to 'debate' the issue.

Tonight on The Sunday Game, former Dublin manager Pat Gilroy and current Meath boss Andy McEntee will discuss the Dubs and debate whether there's a need for action by the GAA to help level the playing field - tune in to @RTE2 from 9.30pm #RTEgaa pic.twitter.com/0VkSUL6pcx

Unfortunately, the debate GAA fans were hoping for did not materialise.

Pat Gilroy and Andy McEntee share their views on the question of whether splitting Dublin is a solution to the dominance debate #RTEGAA @RTE2 @RTEplayer pic.twitter.com/39Ij5i7IQ6

The pairing made perfect sense from a producer's perspective: the manager of the 2011 Dublin team who helped launch this era of dominance, and the manager of their nearest rival, who had a front row view as Dublin beat Meath by 21 points in the Leinster final last month.

While everyone in the panel acknowledged that a problem exists, realistic solutions were not forthcoming. Gilroy's idea of merging neighbouring counties like Cork and Kerry and Cavan and Monaghan - essentially Railway Cup Nua - is a non-runner. The crisis was approached as a population problem, and finances and Dublin's massive commercial power were mostly sidelined.

'I don’t know any of my players who’d like to see Dublin broken up,' Andy McEntee said.

That's fair enough, and Sean Cavanagh seemed to say as much after on Saturday but it's hard to imagine admit any player admitting similar. To admit that would be to give up on the hope that Dublin can be beaten. It's becoming clearer with each passing Championship that the cards are seriously stacked in Dublin's favour.

There was widespread frustration on social media after the segment was aired.

This Dublin team is the greatest of all time. Unfortunately they're now so far ahead of every other county that the integrity of the All-Ireland championship is in question. This is a burning issue for every fan of the sport and it isn't going away. Solving the problem starts with staging better debates about the problem. 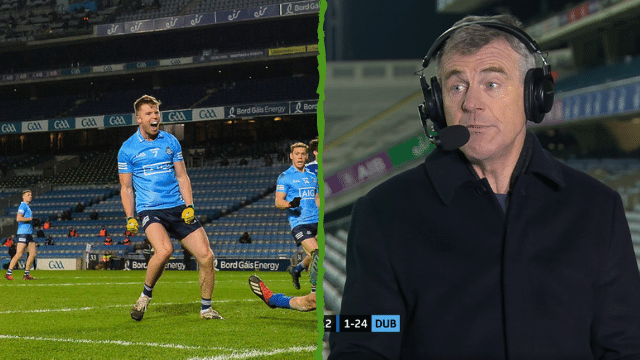 GAA
1 day ago
By Balls Team
The GAA Players Who've Played Soccer 'Across The Water' XI
GAA
4 days ago
By Gary Connaughton
Tomás Ó Sé Thinks New Black Card Rule Could Add More Confusion To Game
GAA
1 week ago
By Declan Rooney
'You Don’t Have To Give Up Everything Once You Have A Child'
Popular on Balls
Horse Racing
21 hours ago
By Gary Connaughton
Gordon Elliott Receives 12-Month Ban, With Six Months Suspended, Following Controversial Photo
Athletics
3 hours ago
By Emmet Bradshaw
Drama After The Finish Line In Men's 1500m Final At European Indoors