'Sport Gave Me An Outlet. It Gave Me Something To Channel That Anger'

Thérèse Maher's 16-year search for an All-Ireland camogie title is the subject of the latest episode in the new series of TG4's Laochra Gael.

Along the way, Maher - one of 11 siblings - lost both her mother and father.

"My mother got sick when I was in college in 2003 and she got five good years, and it came back in July [2008] and rapidly progressed then. She’d only come home from hospital the day before the All-Ireland," Maher recalls.

"I remember she had her maroon tracksuit on at home in the kitchen the morning before I left, and my brother Vinny stayed at home from Dublin that day to sit with her. But she didn’t have a particularly good day.

"I remember phoning my mother after the match. I was hoping for her sake, and the family, that we could give them some sort of a lift if we had won that day but it wasn't to be.

The Queen of @GalwayCamogie96 spent 16 years battling with her County & finally fulfilled her destiny in 2013; on the same day she hung up her boots.🏆

"I remember speaking to her afterward. She was like, 'Thérèse , don't be upsetting yourself now. It's not your fault'. It was just always her way, to put you at ease.

"When I came home on the Monday, she'd gone back into hospital. My mother passed in October. She had such life, and love to give, she really didn't want to die.

"All the firsts after that were tough - Christmas was very hard. I wanted the day to go as fast as it could. I couldn't wait for January and February to come because sport gave me an outlet. It gave me something to channel that anger that I was feeling because she was just at a time when we were all grown up; we were able to give something back to her - she was only 64 when she passed away.

"Camogie gave me a focus. It gave me something to get out of the house."

Her father, who lived with Parkinson's Disease, died a few years later.

"When both mam and dad died, we lost them and could never get them back," she says.

"With sport, it's only sport, and I always had another chance. Losing mam and dad helped me understand that there's more to life than camogie, but I also knew I needed it to move on.

"After the 2008 All-Ireland final, I went into the hospital to see my mother. We were sitting down having a chat, and I remember saying to her that I don't think I'm ever going to win one [All-Ireland]. She looked over at me and said, 'Thérèse, something tells me that you won't stop until you do'. It always just stayed with me for the years after."

In what was her final year of inter-county camogie - one in which she was also named Player of the Year - Maher and Galway beat Kilkenny by five points in the 2013 decider.

"I had waited for a final whistle like that with Galway [ahead] on the scoreboard for such a long time that it was such a huge relief," she says.

"I did what naturally came to me, I fell on my knees and was so grateful and thankful that I'd finally done it. There was probably a nod up above to the two people that were looking down on me. 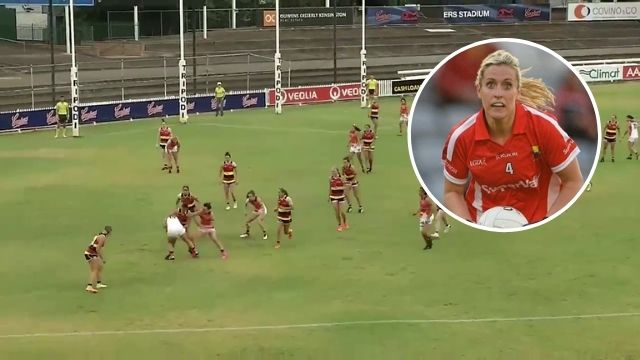 GAA
2 weeks ago
By PJ Browne
Can You Get 10/10 In Our Quiz Of The GAA Weekend?
GAA
2 weeks ago
By Daragh Ó Conchúir
Raharney Banish Demons With Revenge Victory Over Clanmaurice
GAA
2 weeks ago
By Daragh Ó Conchúir
Kate Kenny Propels Super St Rynaghs To Thrilling Triumph
Popular on Balls
Rugby
2 days ago
By Colman Stanley
Keith Earls Shares Story That Captures Andy Farrell's Decency
Football
2 days ago
By PJ Browne
'If He Continues With Performances And Goals Like That, Stephen Kenny Will See It'
Football
2 days ago
By Eoin Harrington
Quiz: Name Every Player To Score In A Champions League Final
Football
1 day ago
By Gary Connaughton
Portsmouth Likely To Retain Gavin Bazunu This Month Despite Championship Interest