At the heart of Limerick's awesome All-Ireland final display was their centre forward and Man of the Match, Cian Lynch. For Jackie Tyrrell, Cork got their tactics in countering him badly wrong.

the Patrickswell man was outstanding in Croke Park on Sunday as creator and scorer. He struck 0-6 from play in what was a near-perfect performance.

However, for four-time All-Star defender Jackie Tyrrell, Cork's approach in countering Lynch was incorrect from the off. Speaking on the Sunday Game, he pointed to the space afforded to the centre forward.

They got that one very wrong. Mark Coleman was the wrong guy for it. Ger Millerick, his loss today was huge. It can not be understated. I would have thought a Damien Cahalane type figure could have been sprung in. Detail him. Be in his ear for two weeks.

'Look at Cian Lynch. All I want you to do is tip the ball away. Get in his face.' I just felt they left it too loose. Mark Coleman sitting back deep and then trying to step up, it is too much. Cian Lynch, all he needs is a yard and he can make things happen.

Brendan Cummins was in full agreement: "You need to have a specialist man marker on him. You can not just pick someone out of the clouds to do it."

So how do you solve a problem like Cian Lynch? It might not be possible right now, but Cork didn't help themselves with their approach. #rtegaa #TheSundayGame pic.twitter.com/xhdDLsdaxk

In many ways, the Lynch conundrum highlights the seismic challenge in stopping this Limerick side. Their entire half-forward is ruthlessly efficient when afforded space, but man-marking carries the risk of exposing the full-back line.

They propose a searching question. One few look capable of answering anytime soon.

SEE ALSO: Watch: Cian Lynch Was Overjoyed After Firing Limerick To Another All-Ireland 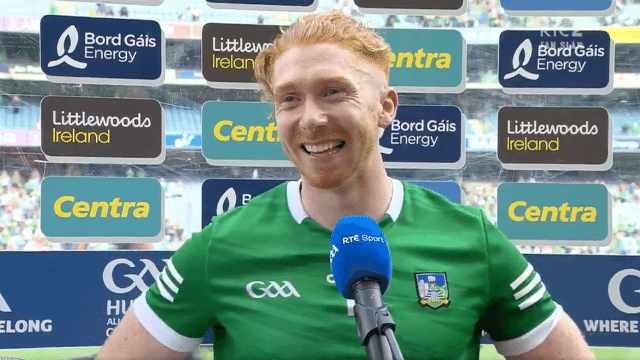