This weekend's All Ireland Ladies Senior Football Final promises to be a brilliant contest between the two top teams in the country. In anticipation of Sunday's triple header, we look back at the best and most important finals which have shaped the history of the LGFA since the very first final forty-two years ago.

Incredibly it is as recent as the mid 1970s that the first ever All Ireland Senior Ladies Final took place in Durrow, Co Laois. It was only a few months previously that a groundswell of support had grown into the Ladies Gaelic Football Association forming in Hayes Hotel, Thurles. Eight counties took part in that inaugural tournament with Tipperary sneaking past Offaly 2-3 to 2-2 in the first ever All Ireland Senior final on October 13th, 1974. 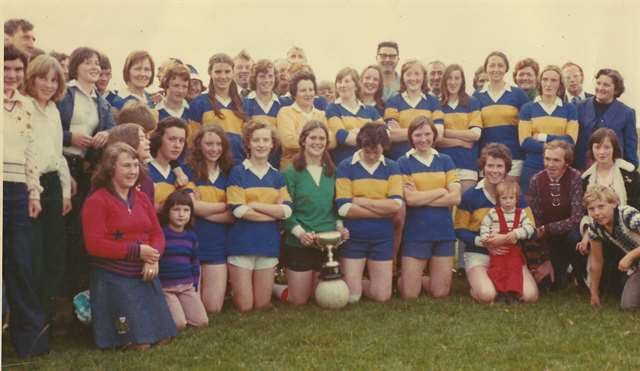 Mary Geaney hit the first ever hat-trick in a final as the Kingdom women did what their male counterparts failed to do in 1976, namely win the All Ireland Senior Championship. It was a first of their roll-of-honour-topping eleven titles for the Kerry women.

By 1986 Kerry ladies were making serious waves in the LGFA - they had won six league titles in a row and four in a row All Irelands, but this was the first time that the centrepiece of the Ladies game, the All Ireland Senior Ladies Football Final, was played in Croke Park. It was fitting that one of the greatest ever sides were able to see off Wexford on the biggest stage of them all.

Even the great Cork side of today have yet to achieve the amazing feat of winning nine consecutive senior All Irelands. Between 1982 and 1990 Kerry were unbeatable with Mary Jo Curran (below) one of the top players in the country and Margaret Lawlor Slattery picking up her tenth medal as they overcame Laois 1-9 to 0-6 to take their place as one of the greatest sides in gaelic football. 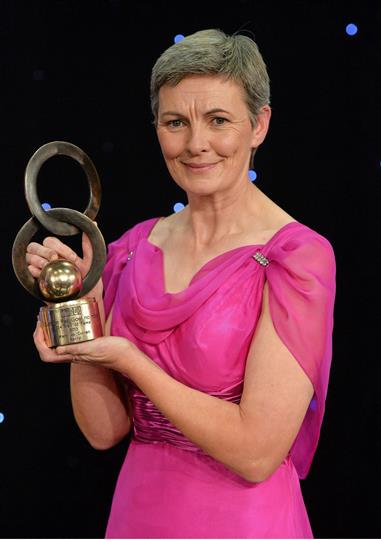 Kerry were to Waterford Ladies what Kerry Golden Era team were to their Cork counterparts - a pain in the arse. Finally in 1991 Waterford made the breakthrough, beating their arch rivals and going on to win the All Ireland defeating luckless Laois in the final 5-8 to 3-7, still the highest number of goals scored in a final. Áine Wall finished with 3-3 in a superb individual performance.

Bar a Cavan victory in 1977, Ulster had little luck in the All Ireland senior championship until a magnificent Monaghan team burst onto the scene in the mid-90's. Their battles with Laois and Waterford in this era gave a huge boost to the Ladies game. Brenda McAnespie, Niamh Kindlon, Edel Byrne and Diane Dempsey were just some of the Monaghan heroes of that era. Their defining moment came in the 1997 final when they saw off Waterford in a thriller 2-15 to 1-16. 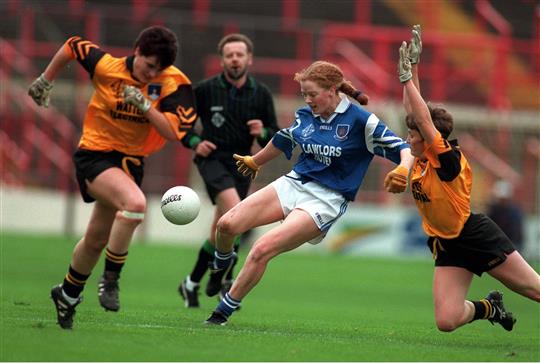 It's the week before your first ever final and your star forward breaks her arm in training. What do you do? Start her if you're the Mayo management in 1999, and that's exactly what they did for Cora Staunton in her first ever final (find out more about that here). An exceptionally good Mayo side featuring Denise Horan, Diane O'Hora, Marcella Heffernan, Sinead Costello, Sabrina Bailey and Christina Heffernan would win the last GAA final in Croke Park in the 20th century, edging Waterford 0-12 to 1-8. They went on to win three more finals in the next four years. Oh yes, and of the starters that day Cora, Yvonne Byrne, Claire Egan, Helena Lohan were STILL involved with Mayo in 2016.

Munster minnows arrive on the scene

Forty years after the launch of the LGFA and Cork, one of the winningest counties in every other aspect of the GAA, had won a grand total of zero Munster senior titles. It's incredible to think back now but Cork were very much in the shadow of their neighbours in Kerry and Waterford at that stage. A first ever Munster arrived in 2004 before a year later they beat reigning champions Galway 1-11 to 0-8 in the All Ireland Senior Ladies Football final. The goal came from a young whippersnapper by the name of Valerie Mulcahy (below). A dynasty was born. 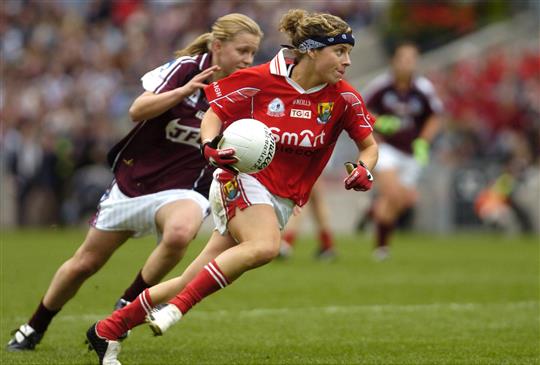 As amazing as Cork's lack of success at senior intercounty level was until 2004, Dublin are in the same boat, winning just one Brendan Martin Cup in their history. That came in 2010, after losses in 2003, 04 & 09. Six in a row chasing Cork were defeated by Tyrone and the Ulster women were slight favourites heading into the decider but a brilliant display by the women from the Capitol saw them emerge victorious for the first time in their history.

The greatest comeback of them all

The All Ireland Ladies Senior Football final of 2014 -never to be forgotten, probably never to be repeated.

See Also: What Happened When Joe Brolly And Paul Kimmage Went For A Pint After The All-Ireland