There Were Two Poignant Moments In David Burke's Captain's Speech

David Burke followed in the footsteps of the likes of Conor Hayes and Joe Connolly by captaining Galway to Liam MacCarthy glory on Sunday.

There were two especially poignant moments in Burke's captain's speech. The first was a mention for Tony Keady who passed away last month aged just 53.

Keady was a Galway hurling legend. When Galway celebrated All-Ireland hurling success in 1988 - the last time prior to today - Keady was named Hurler of the Year.

As Burke paid tribute, Joe Canning stood on the pitch with Keady's family. The crowd also showed its appreciation for Keady by chanting his name. 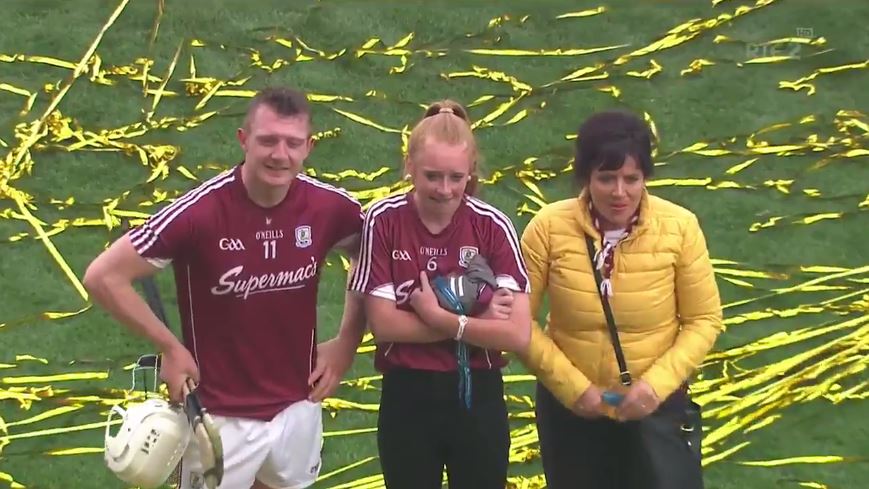 There was also recognition for Keady during the game as a minute's applause rang around Croke Park with six minutes on the clock. Six was the number Keady regularly had on his back during his Galway career.

I can't let the day pass - 29 years ago, this man got Man of the Match in an All-Ireland final in 1988. It would be remiss of me not to mention his name: the great Tony Keady.

To Tony's wife Margaret, children Shannon, Anthony, Jake and Harry, we hope that lifting the cup today will give you some solace from your grief, if only for a few seconds.

Burke also could not leave the Hogan Stand without remembering Galway hurler Niall Donoghue. Aged just 22, Donoghue tragically took his own life in 2013.

One other person that I can't let today go without mentioning: he was soldiering with us for years, a good friend of mine, a first cousin of Conor Whelan; he passed away in 2014 - Niall Donoghue. We'll never forget him. We remember him today.

We'll give a small shout out to Pieta House who are doing great work for people who are in depression and hopefully, they'll help many more.

GAA
8 months ago
By Aonghus Ó Maicín
25 Years On, Wexford Hero Of '96 Wouldn't Have A Place In The Modern Game
GAA
8 months ago
By Michael McCarthy
Where Limerick's All-Ireland Final Performance Ranks Numerically
GAA
8 months ago
By Michael McCarthy
Quiz: Can You Name The Top Scorer In Every All-Ireland Hurling Final Since 2000?
Popular on Balls
GAA
3 days ago
By PJ Browne
Mayo's Padraig O'Hora Using Football To Promote His Real Passion
Rugby
23 hours ago
By Colman Stanley
'That Pace, That Intensity, That Organisation' All Black Legend Has High Praise For Leinster
GAA
23 hours ago
By PJ Browne
Jim McGuinness's Gut Tells Him Dublin Will Win The All-Ireland
33