A goal in each half from captain Neamh Woods helped Tyrone claim the TG4 intermediate title and secured their return to senior football after a three-year absence.

Niamh Hughes, Gráinne Rafferty and Gemma Begley also hit the net for Gerry Moane’s side, who put the upset of last year’s defeat at the same stage behind them to win their first adult All-Ireland title since their 1999 junior success.

After winning the toss and electing to play against the wind, Meath would have been pretty happy to find the target first when captain Niamh O’Sullivan made the most of Stacey Grimes’s strong run after four minutes.

But Tyrone’s soon found their first score, and the lead was theirs when Woods exchanged passes with Rafferty and palmed to the net after six minutes.

Tyrone continued to show their prowess with Woods pulling the strings at midfield, while their powerful half-back line carried well, so it was no shock to see them goal again in the tenth minute. The grounded Áine Canavan did well to get her pass away to Hughes and she finished to the net with a cool conversion.

The early goal rush continued for Tyrone after 13 minutes when Rafferty crept in behind the Meath cover and finished off Begley’s diagonal delivery, which gave her side a 3-1 to 0-1 advantage.

Meath looked rocked and beaten at that point, but with Grimes to the fore, Eamonn Murray’s side produced a powerful ten-minute spell to close the gap to 3-2 to 0-7. 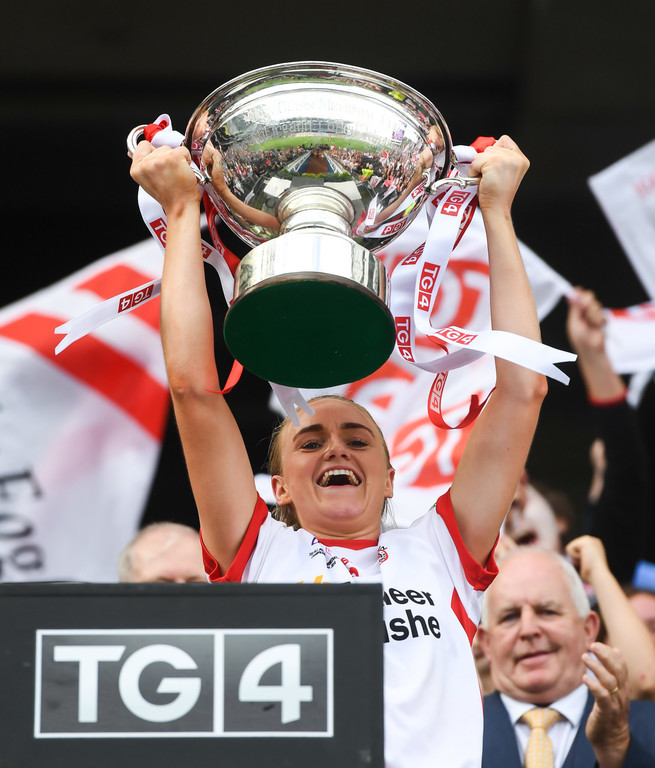 But Tyrone finished the half strongly. After Chloe McCaffrey stopped the rot with a great point, Begley and Emma Jane Gervin linked well and substitute O’Neill finished off another super move to the net for a 4-3 to 0-7 half-time lead.

As one of the most experienced players and a veteran of the 2010 senior final, Woods is real driving force in this Tyrone team, and two minutes after the restart she waltzed though the Meath defence and fired her second goal to end all doubt.

The loss of Cavavan in the first-half half prompted the introduction of O’Neill and she showed her talent with three points in six minutes to push Tyrone 12 points ahead, although she was soon sin-binned along with Meath’s Máire O’Shaughnessy.