'It Is Unique, It's Unknown, It's Uncharted Territory For Everyone'

Galway missed out on promotion to Division 1A of the National Hurling League once again this spring but last year’s league, Leinster and All-Ireland winners will look for a change in fortunes when they launch their championship campaign on Saturday week in Tullamore against Offaly.

The 2017 young hurler of the year says there was plenty of disappointment in the Galway camp after they failed to earn promotion again, but all eyes are trained on their round robin opener against Offaly, a side they defeated by 11 points in the league.

“Promotion was a big goal for us. Obviously everybody wants to be in Division 1A and that's at the top table but that's just the way it worked out and we're just looking forward now,” said Whelan, who doesn’t turn 22 until October.

“Then we went down to Wexford and were beaten by a better team on the day. That's just the manner of how it goes.

“They’ve really upped their game. Just looking at the league they’re a very impressive team and play a nice brand of hurling. We are not taking anything for granted and we know Offaly will be strong and physical.

“It's the first championship day of 2018 and something to look forward to and it's where you want to be I suppose. The winter months are over now and we're looking forward to championship.”

Both the Leinster and Munster provincial championships have been revamped ahead of the summer, and after their opener against Offaly, Galway have a bye week before they welcome Kilkenny to Pearse Stadium for their first Leinster championship game at the venue.

It has taken years of lobbying to bring championship hurling to Salthill and supporters are thrilled to have Brian Cody’s team coming to the venue, but Whelan doesn’t know what to expect.

“It is unique, it's unknown, it's uncharted territory for everyone and we're not really sure how it's going to pan out.

“I wouldn't say (Kilkenny) is an X on the calendar to be honest. We are not looking past Offaly and if you lose your first game, straight away you're in serious trouble.

“I suppose it is going to be a change alright – I've never played a home championship game in Pearse Stadium. To be totally honest I haven't really thought about it too much.

“I suppose Offaly is the X on the calendar and to be honest we haven't really looked past that or at home advantage or whatever. Home advantage can be of benefit but will have to wait and see how that pans out really.” 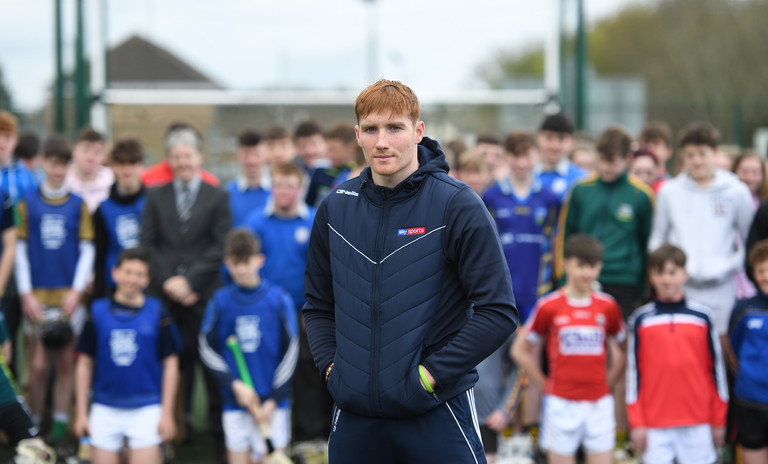 Whelan was speaking in one of his old classrooms in Gort Community College, where he appeared as part of Sky Sports’s launch of the GAA Super Games Centres.

Although it is four years since he completed his Leaving Cert at the school, he and some former pupils were back a few months ago with the Liam MacCarthy cup. Nine of the Galway panel received their education at Gort CS and Whelan said it was a special occasion bringing back the trophy to his alma mater.

But he was not willing to give a boost to one of their rivals by picking a potential champion from the chasing pack. The Kinvara club man sat firmly on the fence.

“To be honest there are six or seven teams who could all be considered All-Ireland contenders. Leinster is very competitive: there's five teams there and you're just looking around and every team is capable of beating anyone and it's the same in Munster.

“It's a championship to look forward to. Nobody is really sitting there and passing judgement on who could potentially win the All Ireland.

“Everyone is concerned with themselves getting the performance right in the first round of the championship and Galway are not any different.

“I’m four years in the squad and it feels like it was only yesterday. Every year is different and 2018 has a new structure and a new championship and with that comes different challenges.

“You always have to try and keep moving with the times and try and develop your game and I am not any different to anyone. It doesn't really matter how long you've been here, if you're not willing to improve and willing to get better you're going to stand still and fall behind pack.

“You have to keep on developing your game and keep wanting to get better.”

GAA
1 year ago
By Arthur James O'Dea
Watch: Galway Burst Out Of The Blocks With Early Conor Whelan Goal
Previous Next

GAA
8 months ago
By Dylan Ryan
The Speed Round - It's The Final Round Of The #SDSkillset Hurling Challenge
GAA
1 year ago
By Arthur James O'Dea
Watch: Galway Burst Out Of The Blocks With Early Conor Whelan Goal
Popular on Balls
GAA
23 minutes ago
By Balls Team
Paul Mescal Proud To Be Bringing GAA To Worldwide Audience
4