Vindicated 'Normal People' Goalkeeper On His Incredible Save

'Normal People' will be remembered for its pioneering and realistic depiction of Ireland's favourite leisurely pasttime: gaelic football. The GAA scene in Episode 1 has been praised as possibly the only accurate and believable gaelic football action ever captured on a TV show or movie. It was helped obviously by the fact that star Paul Mescal has a GAA background, and that director Lenny Abrahamson is Irish.

But there were at least twenty other uncredited extras who gave that match a feeling of reality.

One person who came in for some polite ribbing after the episode is the young man playing in goals for that scene. Connell bears down on goal and scores easily, with the goalie hardly budging. Were 'Normal People' real life, that keeper would have been subbed off immediately. 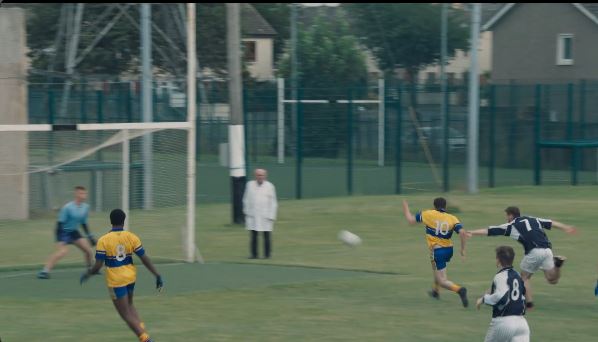 That young man's name is Adam O'Connor. It turns out he is a character in his own right. Adam received some good-natured slagging from the likes of Dara O'Briain about his goaltending in the scene. Abrahamson, however, confirmed that O'Connor had made a worldie of a save during filming that didn't make the final cut, and that he even needed to be told to let Mescal score.

Abrahamson shared the clip to Twitter today. As it turns out O'Connor's reflexes were outstanding:

Pssst - some rushes from #normalpeople showing the 2 saves the goalie made (first one pretty spectacular) before the take where Connell scores. As some speculated, I may have had a quiet word with him in advance of the final, used take .... Very fine keeper, tho. pic.twitter.com/VOTOOCcItr

Balls.ie spoke to Adam this afternoon. Adam is a fifth-year in Hartstown Community School in Blanchardstown, where most of episode 1 was filmed. During filming last summer, Adam responded to a call from his school and club looking for GAA extras in a new Irish TV programme.

Little did he know that he would be front and centre in a famous scene in Irish telly.

O'Connor says it took 'a long day of shooting to capture the scene but finally we got something'. One of the hold-ups was him stopping Mescal's shots.  'I had to let the goal in eventually.'

Adam's goalkeeping credentials are real. He's a goalkeeper with the Dublin minor hurlers. He also plays in goal in football and hurling for Peregrine's. "I have a bit of experience in goal in football, but nothing major. It's more on the hurling side of things.'

Adam's appearance in Episode 1 is brief: 'a quick four seconds of a goal being let past me' is how he describes it. He said he felt 'glad' to be vindicated by seeing the rushes of his original saves tweeted by Abrahamson.

"I was glad. I'd gotten into a slagging match with Dara O'Briain and Malachy Clerkin over it. I never took it to heart really. You can't really with these things," he said.

O'Connor also gave Paul Mescal praise for his GAA skills: 'I'll give credit where credit's due. [He's a] good footballer, just a slight bit rusty judging on shots during filming."

Adam's saves have been seen at least 160k times already, which isn't bad. He might have been beaten for a goal in 'Normal People', but the world now knows that he's a serious goalkeeper.

He’ll be glad to have that sorted before we resume training with @stperegrinegaa. Here he is doing what he actually does best #hurlforhope https://t.co/p1lmI0xaC1 pic.twitter.com/uEiFk4r1Oo

Football
21 hours ago
By Gary Connaughton
Report: Liverpool Set To Miss Out Another One Of Their Transfer Targets
12