Vote For The Greatest Gaelic Football Moment Of The 21st Century

So far this lockdown, we've decided Ireland's greatest manager, TV character and football jersey. Now we want you, the Balls.ie readers, to decide the best gaelic football moment of the 21st century.

First of all, let's define some of the ground rules of this bracket. We're only considering intercounty gaelic football matches that took place this century. We're only discussing men's football here, and we're leaving hurling until next week.

We've also given a lot of thought to what defines a 'moment'. These are the iconic plays, scores and interviews that are entering the realm of folklore. We also think it's important to separate moments from achievements. Dublin winning the 5-in-a-row is the greatest achievement ever in intercounty football but that's not included here as we feel there were more memorable Dublin football moments en route to that milestone. Similiarly Donegal beating Dublin in 2014 or Dublin beating Donegal in 2011 stand out as legendary games, but they occurred without any truly famous moment.

We're starting with the round of 16. Get your vote in - reliving these 16 incredible moments will make you fall in love with the sport again.

The case for Sheridan's 'goal': A great moment in its scale perhaps more than anything else. Louth were seconds away from a deserved Leinster title in 2010 when Joe Sheridan basically scored a try into the Canal End goal. Referee Martin Sludden allowed the goal and Meath were Leinster champions. Louth had been robbed and, rightly indignant, confronted the referee. This quickly went too far and fans got involved with Sludden seemingly in genuine physical danger as police escorted him off the pitch.

The case for Kev Mc: One of the greatest games ever played and came down to Dublin’s clutch man yet again. Was he going for a goal or a point? It all adds to the madness of the moment.

The case for Paidí: A great GAA moment is all about emotion, and this had it in spades. Two giants of Kerry football who’d each brought Leinster counties from the wilderness to the cusp of success. As Westmeath won their only Leinster title ever over Laois in a replay, Paidí had proven once and for all that a grain of rice can tip the scale. The scenes of joy that afternoon will live long in the memory. 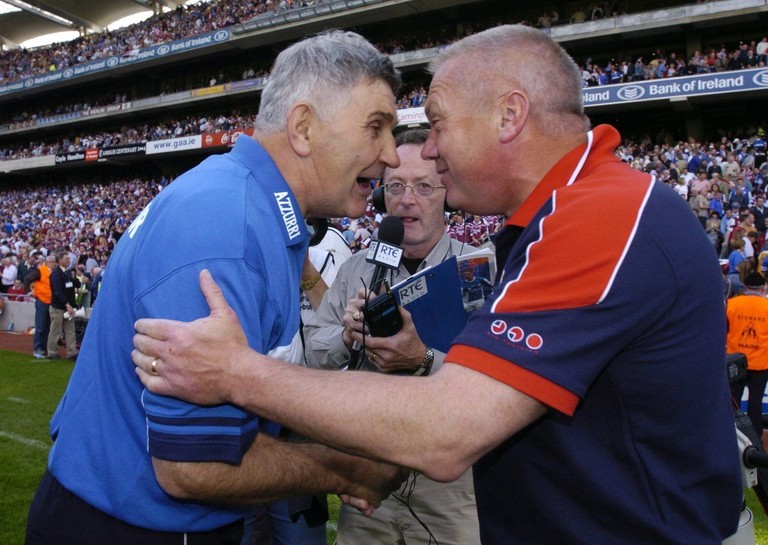 The case for Mugsy: “Mulligan. Still Mulligan. STILL MULLIGAN” Owen Mulligan’s two dummies got everybody watching out of their seat in 2005

The case for Cassidy: Kevin Cassidy was cruelly denied the biggest moment of all in 2012 but in 2011, he was the man for Donegal’s biggest win. A classic game of back and forth with a Donegal team on the cusp, the last chance for Kieran McGeeney’s Kildare who were so close yet again, and the confidence to shoot from 50 yards to win a game. Magic for Donegal. Despair for Kildare. Everything a good GAA moment is made of.

The case for the McHughs: Twenty years after his father had done, Mark McHugh had won the All-Ireland and his dad Martin was right there on the sideline doing punditry for the BBC. That was out the window as father and son embraced. The beautiful human side of sporting achievement captured in one glorious, emotional moment.

The case for Canavan: On the biggest stage of them all, we want the biggest players to leave their mark. Canavan’s goal was pure perfection and suggested Kerry were in for another Ulster nightmare in 2005. The replay from behind the goals which tracks Canavans run is how you shoot the goal in a film.

The case for Deano: Two classic games had come down to this. A free to win the three-in-a-row. Another classic final between Dublin and their toughest opponent. Rock stood up, even with Lee Keegan’s GPS tracker thrown at him, and calmly kicked Dublin to another Sam Maguire.  It was even more heartbreak for Mayo. A moment that won’t be forgotten.

The case for Armagh: There has been no All-Ireland final Croke Park pitch invasions for the three years the Hogan Stand had been redeveloped. The GAA wanted to keep it that way and when Kilkenny won the hurling two weeks before, they had succeeded. When Armagh shocked Kerry two weeks later and won their first ever All-Ireland title, nothing was going to stop them. Eventually a Hill 16 gate was opened, and a sea of orange flooded the Croke Park field to celebrate one of the great breakthroughs.

The case for Maurice Fitz: One of the most memorable scores of all time. An old enemy slain. A genius confirmed. And Thurles!

The case for Cillian: There’s 77 minutes gone in an All-Ireland final Mayo had dominated. They are a point down, somehow, having scored two own-goals. It’s scarcely believable. They are cursed. It’s not meant to be. Just don’t tell your star forward. A magical point from play that took balls, skill and determination. Everyone outside of Dublin leapt to the air.

They didn’t do it the next day, but in the moment, this was everything.

The case for Cluxton: Dublin’s 16 year wait for Sam would come down to a kick to win it all, by the goalkeeper, into the Hill. Real last scene in the sports movie stuff.

The case for the Gooch: The moment that truly captures the genius of the Gooch. The catch, the dummy, the juke, the shot that was passed into the net. Gooch won his first All-Ireland by scoring 1-4 from play, and became a legend in the process.

The case for Mayo Mick: It wasn’t just a pitch invader. It wasn’t just that it took five stewards to take him down. It wasn’t just that it was Mayo. Following one the best games ever played, the replay was controversial before it ever threw in with it’s scheduling for the Gaelic Grounds in Limerick. Then we had another classic, another draw, extra-time, a scrap on the pitch, and everything else besides. Mayo Mick was rampaging cherry on top.

The case for Gormley: It’s the last minute of an All-Ireland final, something you’ve never won in your history. You’re three points up, the All-Ireland champions have broken you down in the last minute of the game, one of the best forwards in the game is through on goal. Never has a block meant as much as Conor Gormley somehow making up the ground and throwing himself in front of Stevie McDonnell’s shot.

The case for McDonald: A day that started with “Hillgate” is sometimes remembered just for that. But it was also the day the genius of Ciaran McDonald was set in stone. A masterful performance amplified by a wonderful winning point, sealing a dramatic Mayo comeback. He started the move in his own half, sprinted up the field, and kicked over on his left without ever breaking stride.

Here's the entire bracket for your fridge. Print it out - this is going to be thrilling. 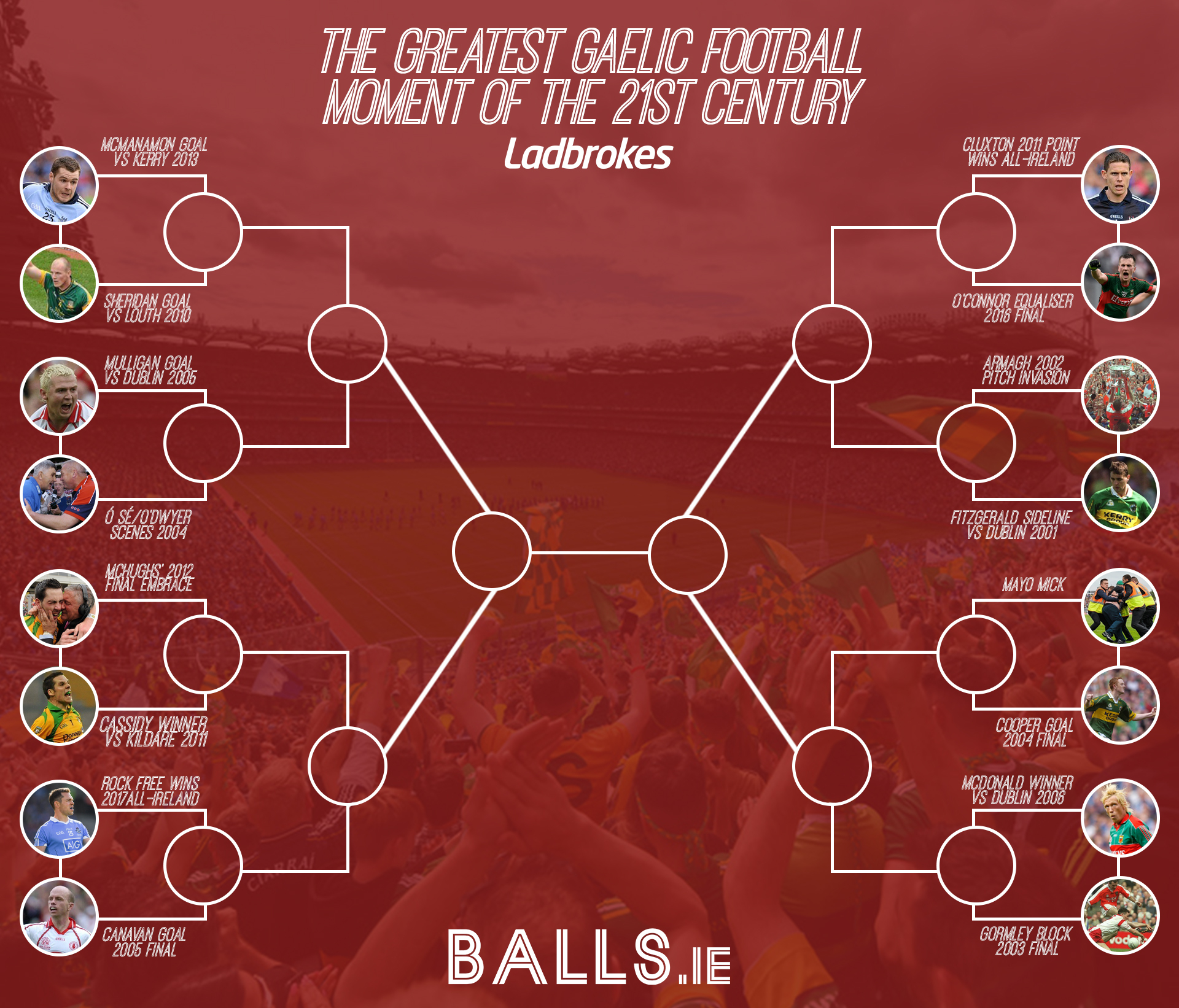 This bracket is being organised in association with Ladbrokes

GAA
13 hours ago
By Balls Team
Ranking The Top 6 'Outside Managers' In The History Of Inter-County GAA
GAA
2 days ago
By PJ Browne
Once Told He Wasn't Good Enough, Gearóid Hegarty Now Hurler Of The Year
GAA
4 days ago
By PJ Browne
'He Was Such A Battler' - Hegarty Pays Tribute To Late Limerick Physio
Previous Next