We are down to the final four in our bracket to crown The Greatest Gaelic Football Moment of the 21st Century, in association with Ladbrokes.

There's only one place we can begin for the round-up of the quarter-final results and that is with the undoubted tie of the last 8: Stephen Cluxton vs Maurice Fitzgerald. While Cluxton's winning point in the 2011 All-Ireland final may have trumped Fitzgerald's 2001 sideline, skillwise, the Kerryman's is arguably the greatest point in history.

Both incredible moments in their own right. A point from a Dublinman against Kerry vs a point from Kerryman against Dublin. Who would emerge victorious? Alas, Maurice Fitz took it home with 57% of the vote. He now must surely be the favourite to win the whole bracket out.

In the rest of the quarter-finals, Owen Mulligan and Peter Canavan have made it an all-Tyrone 2005 semi-final on the other side of the draw, after beating Joe Sheridan and Kevin Cassidy respectively. In the final match of the last eight, Ciaran McDonald beat his fellow countyman, Mayo Mick, setting up a Kerry v Mayo semi-final.

Here's how things look so far. Click here for a larger version of the bracket. 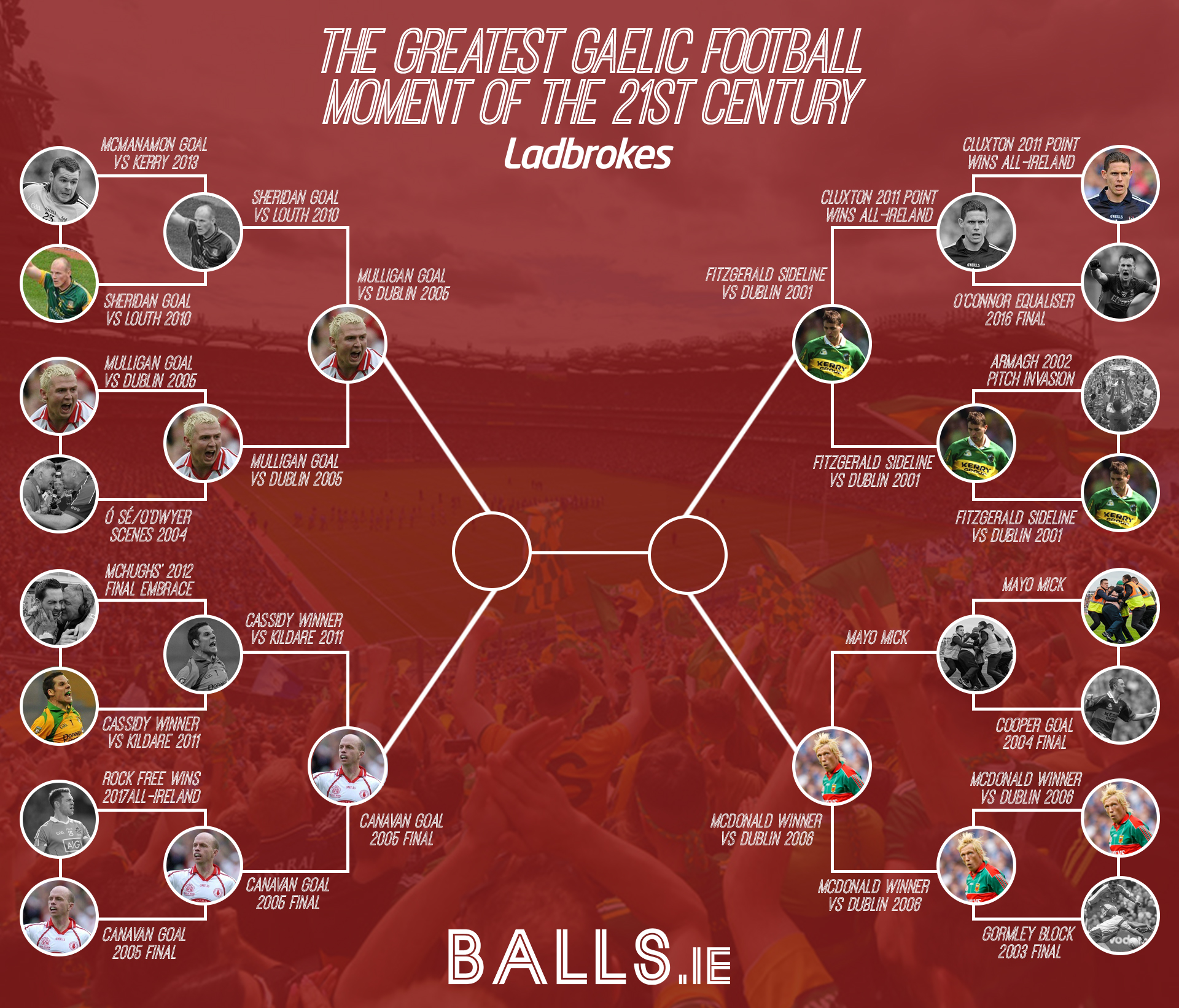 In many ways it's fitting to see Tyrone, Kerry and Mayo in the semi-finals, three teams that have given so much to us over the past 20 years. Who makes the final? That's up to you. Voting is open on our social stories, on our Twitter page and onsite below, where it will remain open until 9am Wednesday morning.

The case for Owen Mulligan

First of all, Mulligan is a winner regardless of what happens here as he has a big role in the All-Ireland final moment as well. However when it comes to sheer ingenuity, surprise and that wow factor, his goal vs Dublin is hard beaten.

The case for Canavan

What else can we say about this moment that we haven't already touched on in previous rounds? Spare a thought for poor Paul Galvin. From the moment Mulligan gets the ball in his hands Galvin does everything right. He spots Canavan coming, he reads the play and steps off Mulligan, ready for Canavan to get possession.

No sooner has Peter the Great the ball than Galvin is diving at his toe to block any goal attempt. But Canavan's finish is just too damn good. Along the grass and in the corner, maybe not the most spectacular finish but arguably the perfect finish.

It's also worth remembering that, while it may have only been injury time in the first half, Canavan's goal was a killer blow to Kerry. After dominating the opening quarter, they were beginning to fell the pinch from Tyrone. The goal gave the Ulstermen the boost they needed and they would go on to win the game by ... you guessed it ... a goal.

The case for Maurice Fitzgerald

An awful lot of the great moments we've talked about have been made significant because of the occasion. In many ways the stage plays as big a part in the moment as anything that actually happens on the field. However Fitzgerald's point is different. It's from a quarter-final 19 years ago. It's a match that many will not even remember the result of, yet it is a piece of skill so good that it has managed to wedge its way into a bracket packed pull of All-Ireland finals and last gasp winners.

The case for Ciaran McDonald

The 2006 All-Ireland semi-final was McDonald at his greatest. In fact, you talk about Fitzgerald, McDonald did his best impression of him at the start of this match with a sideline point from the opposite side of the pitch. If it wasn't for his late heroics, that sideline was a point almost worthy of inclusion in this bracket as well.

Was his injury time winner a technically better score? No. But this is about moments and when you're in the dying embers of an All-Ireland semi-final that you've fought so hard to come back into; when you're after sprinting the length of the pitch to even get into the position to kick the game-winning score, those are the moments that last with fans forever. When the chips were down, McDonald was not found wanting.