Now we must decide it. 20 years of football has been boiled down to this - Owen Mulligan vs Maurice Fitzgerald. Tyrone vs Kerry, one the biggest rivalries of the noughties returns!

You've been voting in your thousands throughout our bracket for The Greatest Gaelic Football Moment of the 21st Century, in association with Ladbrokes, and now only two remain. In the all-Tyrone semi-final between Owen Mulligan's 2005 All-Ireland quarter-final goal vs Dublin and Peter Canavan's 2005 All-Ireland final goal vs Kerry, it was Mulligan who cantered home to secure his place in the final match-up. On the other side of the draw, Ciaran McDonald provided a strong test for Maurice Fitzgerald's 2001 sideline point but it was another hurdle he duly crossed.

Maurice Fitz has seen off Dublin (in the form of Stephen Cluxton's All-Ireland winning point) and Mayo but can he do what his fellow Kerrymen could not and beat Tyrone in a final?

The Bracket So Far

Here's how we got to today. Click here to see the bracket in a larger image. 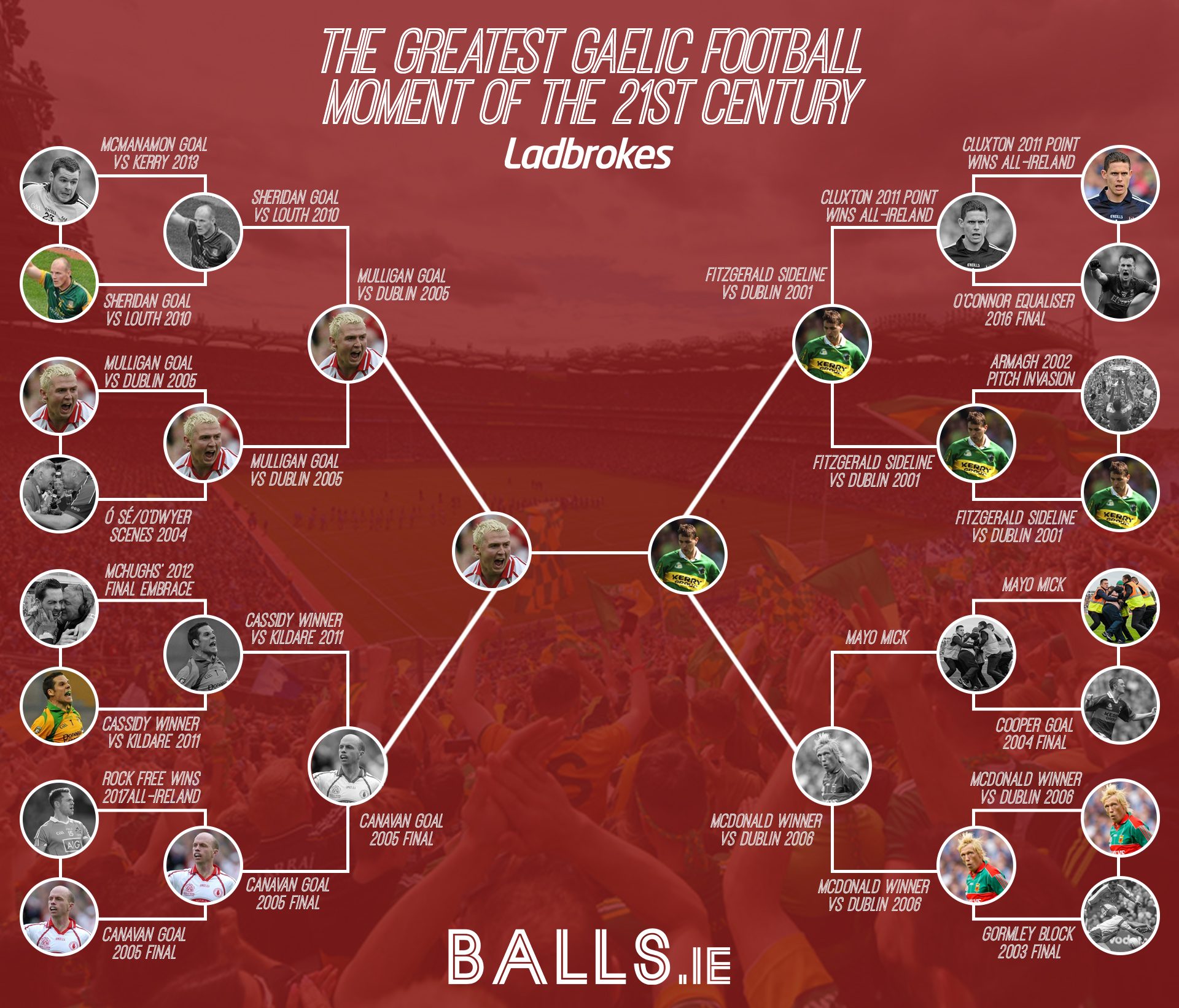 Voting in the final is open on our social media stories, on our Twitter page and onsite below, where it will remain open until 9am on Friday morning. This is a truly remarkable final and one that is too close to call. Who takes it home? That's up to you!

This may be the most important moment in your life so be sure to watch both moments back to help you in making your decision.

First up we've got Mulligan's goal. There's no point in talking about how special both scores were as that fact goes without saying but what potentially sets Mulligan's apart? It came at us like a bolt of lightening. The match was just trundling along and then bang! Mulligan came thundering through the Dublin defence, throwing more dummies than a baby in a pram and drove the ball almost through the net.

Was it the finish perfect? No but that made it all the memorable. This was an explosion of emotion for fan and player alike. You don't finish a heavy metal run like that with a cool finish into the bottom corner; the whole country was on its feet after those fake handpasses, this ball needed to be smashed and Mulligan did just that. And in an instant the season changed. He was transformed, Tyrone were transformed and they never looked back. "Magic Mulligan."

So what of Maurice Fitz? Well Mulligan's may have come at us like a bolt from the blue, Fitzgerald's was the definition of clutch. We've seen the clip a thousand times but it's only when you watch it back in the full context of the match that you can fully appreciate his brilliance. Dublin had come back from the dead and Kerry were floundering. A point down going into injury time, Johnny Crowley had spurned what may be their last chance, only for the resulting Dublin kick-out to go over the sideline.

Everything rested on Fitzegerald, at the 45m line, on the sideline with Dublin manager Tommy Carr in his ear. This was pressure. And how did he respond to pressure? By landing it straight over the black spot. Incredible.

Now it's your time to decide. Choose wisely.