It's time for the quarter-finals in our vote to crown the Greatest Gaelic Football Moment of the 21st Century, in association with Ladbrokes.

No matter how the last 16 ties went we were always going to have to say goodbye to some truly great moments. Farewell to Kevin McManamon, to Conor Gormley and your Armagh neighbours. So long Dean Rock, bye bye Colm Cooper and Cillian O'Connor, and while your warm embraces touched our hearts, there is sadly no place for Páidí Ó Sé, Mick O'Dwyer or the McHughs in the quarter-final.

The closest match in the last 16 turned out to be Sheridan vs McManamon. The goal that never was vs the goal that was never meant, as Mick aptly put it on The Buildup podcast this week. Sheridan just about squeezed it in the end and he now takes on Owen Mulligan in the last eight. Elsewhere the upset of the round has to go to Kevin Cassidy, after he beat his fellow countymen in an all-Donegal tie. His reward? A match against Peter Canavan. 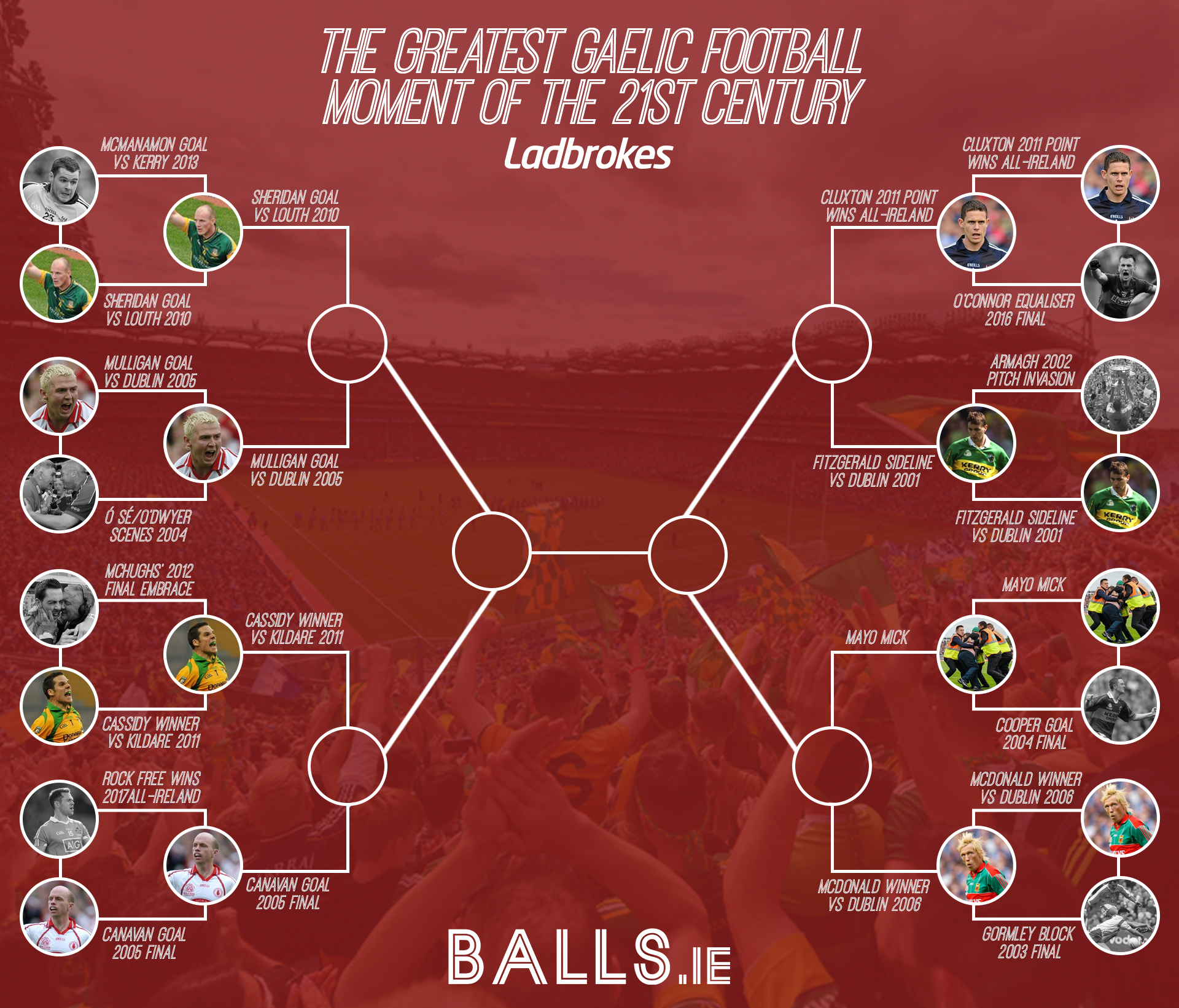 And so we have the quarter-finals. As always, voting is open on our social media stories, on Twitter and onsite below, where they will remain open until 9am on Monday. Choose carefully!

The case for Sheridan:

In terms of scores it definitely fits into a different category than all the other 'great' moments that are on the list but it can't be argued against that Sheridan's goal was one of the most memorable moments of the last 20 years.

The case for Mulligan:

There are moments that are destined to be, given the situation at the time. For example, Stephen Cluxton's free with time up in the 2011 All-Ireland final. Those instances are set-up to be huge but then there are the flashes of brilliance that come out of nowhere. Owen Mulligan's goal against Dublin was certainly that.

As he galloped towards goal, every twist in the tale and every Darragh Moloney "Mulligan!" brought you closer to the edge of your seat. By the time the ball hit the net you were jumping in the air. Unexpected and unforgettable.

The case for Cassidy:

One of the unexpected quarter-finalists, Cassidy's score ticks two important boxes. First of all there was the context of the match. Kildare and Donegal were two of the most interesting teams in Gaelic football at the time. The Ulstermen were beginning to hum under Jim McGuinness, while Kildare were looking to avenge their controversial All-Ireland semi-final defeat the previous year. They clashed in the 2001 quarter-final and the match was everything we'd hoped for. When the ball came to Cassidy, the whole country was already absorbed.

Box two: the skill itself. Clutch!

The case for Canavan:

It's the All-Ireland final, the biggest stage of them all, and Canavan just made all look so easy.  If Owen Mulligan's Dublin goal that same year was rock and roll, Canavan's goal in the final was classical music. He drifts in, Mulligan fetches and passes it off, Canavan slides it into the bottom corner with his supposedly weaker foot. No biggie.

The case for Cluxton:

We've a tie here where both scores speak for themselves. While Fitzergald's may pip Cluxton when it comes to sheer quality, there's absolutely no comparison when it comes to pressure. 16 years since Dublin had won an All-Ireland. Last kick of the game. You've had to run nearly the length of the field to take it. Balls of steel.

The case for Maurice Fitzgerald.

Probably the most beautiful point ever scored in intercounty football. What more do you want?

The case for Mayo Mick:

Mayo Mick was all of us that day, in the sense that the country had reached emotional peak. The two games between Kerry and Mayo were incredible. The various twists and turns had us all boiling over; something had to give. Mayo Mick was a metaphor for the scream we all needed to let out in order to relieve some of the tension that had built up in all of us. Once it was out, normality could resume. Albeit five stewards later.

The case for Ciaran McDonald:

Similar to Canavan's goal in 2005, the striking thing about McDonald's winner is how graceful he looked when executing it. This was Hillgate, this was Mayo coming back from the dead again, this was facing into the Hill - this was pressure. And McDonald just waved his magic wand and over the ball floated. Majestic.