Donegal took on Mayo today in what was a relegation decider at Seán MacCumhaill Park in Ballybofey.

Stephen Rochford's side came into this game under fire once again with major questions raised about their ability to go to the well once more this year, but they started brightly roaring into a 0-05 to 0-01 lead with Kevin McLoughlin and Andy Moran looking lively early on.

However, Donegal had a gem return to the pitch. Paddy McBreaty, who landed 0-30 across Donegal's first four games, returned from injury today and an extremely late announcement confirmed he was to start. He quickly went to work and landed some sensational long-range scores as Donegal ran off seven unanswered points.

What a score from Donegal's Paddy McBrearty at such an acute angle! pic.twitter.com/RSVSBEy70b

It was a much more balanced Donegal side with Michael Murphy gravitating out the field alongside the outstanding Eoghan Ban Gallagher, son of former Donegal midfielder John Ban Gallagher. Mayo, fresh from a hammering against Tyrone were considerably more conservative today and refused to die. It was an imperfect performance but one driven by uncompromising spirit and determination. 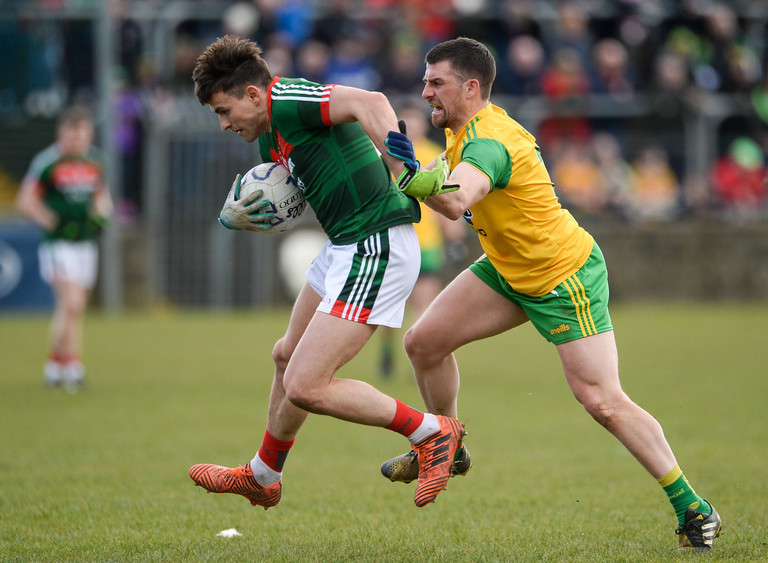 Hugh McFadden and Odhran MacNiallais put Donegal three clear in the closing exchanges but once again, Mayo responded with a superb Conor Loftus free. Eoin O'Donoghue followed it up with an exceptional strike and then it was one. Kevin McLaughlin dug deep with a rosing run forward to claim the ball out wide. A last-gasp long-range score secured the draw and Mayo's future in the League.

Kevin McLoughlin with the crucial point to leave the sides even as the ref blows the whistle pic.twitter.com/Rrj6zuSmCN

GAA
2 years ago
By Maurice Brosnan
Opinion: Donegal's Positivity Punished As Cynicism Now Part Of The Game
Previous Next

GAA
1 year ago
By Evan Coughlan
Watch: Cracking Conor Boylan Goal Helps Limerick See Off Laois
GAA
1 year ago
By Michael Mulkerrins
The Damning Stat That Shows How Clare's Defence Is Killing Them
GAA
2 years ago
By Maurice Brosnan
Opinion: Donegal's Positivity Punished As Cynicism Now Part Of The Game
Popular on Balls
Cricket
13 hours ago
By Michael McCarthy
Irish Commentator Gets Rather Excited On BBC As Ireland Beat World Champions England