Things have been ticking along nicely in the Electric Ireland Munster Minor Hurling Championship, but it was taken to another level this past weekend after Waterford's unbelievable comeback victory over Tipperary at the Gaelic Grounds in Limerick.

After 41 minutes the Premier County were ahead by 11 points and just under 20 minutes from almost certainly ending the Déise's championship hopes, but they would only manage one more score in the remainder of the fixture.

Waterford still found themselves seven points down as the game went into added time, but somehow summoned up the fighting spirit and the necessary goals to devastate Tipp at the death.

Meanwhile Limerick earned the first away win of the new format in the Munster MHC with their win over Cork in Pairc Ui Chaoimh on Saturday.

Having conceded seven goals in their opening two matches, Cork finally beefed up defence by putting a spare man at the back. They lost the necessary firepower up front to beat an impressive Treaty County who are now the only unbeaten team in the province.

The two results have blown the table wide open, with all five counties mathematically capable of reaching the Munster final.

Good luck picking the Electric Ireland Player of the Week after such a phenomenal weekend of action, here are your nominees:

Starting as he meant to go on, Cathal O'Neill opened the scoring for Limerick inside the first minute with a long range free and didn't let up for the rest of the game.

The wing-forward ended the day with 11 points, with six of those coming by the end of a first half in which the Treaty county dominated, going into the break with a 0-12 to 0-7 lead over the Rebels.

In such a competitive championship, a team with notions of silverware need a competent free taker. O'Neill is not only competent but deadly; he tallied seven scores from frees and another from a 65. 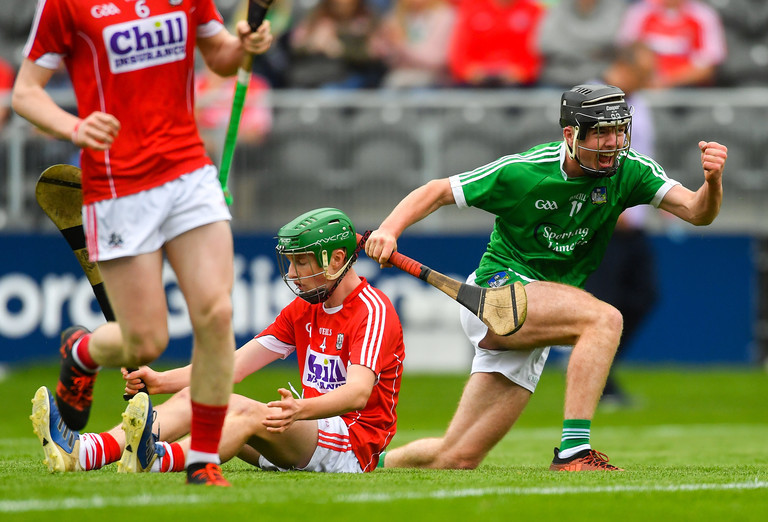 There have been a number of excellent forwards this year who will no doubt make an impact at senior level in years to come, but how many of them can claim to possess the long range shooting ability the Crecora-Manister boy does?

Few players though can claim to have made a more explosive impact on a game than Michael Kiely did at the weekend.

With Tipperary looking set for a relatively easy victory as the clock ticked towards full-time, Kiely burst a hole in the Premier defence to score two goals in injury time to set up a spectacular comeback win for the Déise.

Fantastic Win and Super come back by our minors ⚪️?

Kiely's tally of 2-5 was the most of any player on the pitch by the time the referee called an end to proceedings. He almost managed to complete the entire set of scores too, putting two frees and two 65s over the bar, along with another from play. All he was missing was a goal from a penalty, but we can be sure he's satisfied enough with his two late, late goals from play to win the contest.

Westmeath hurling deserves its due this week following two fantastic results for the county on Saturday. The senior hurlers defeated Antrim to make it to the inaugural Joe McDonagh Cup final, giving them the opportunity to qualify for a place in the Leinster Senior Hurling Championship.

They may well have been inspired by the form of their minors that very same day, who earned themselves a place in the next round of the Electric Ireland Leinster Minor Hurling Championship with a seven point win over their rivals Meath.

Shane Williams got the decisive score in the 42nd minute with a brilliant goal. Meath were within touching distance up until that point in the game, but Williams' nice finish gave the Lake County a seven point cushion that they didn't relinquish for the rest of the tie.

Williams also got two points on the day, one of which came just 26 seconds into the second-half. The 1-18 to 1-11 win puts them into the Leinster MHC quarter-finals, where they will face opposition of an altogether higher standard.

GAA
1 year ago
By Maurice Brosnan
What Westmeath GAA Did Today Was Fantastic, But It Shouldn't Be Necessary
GAA
4 years ago
By Conor Neville
Westmeath Minor Manager Hits Back At County Board 'Jerseygate' With Spiky Statement
Popular on Balls
Football
7 hours ago
By Gary Connaughton
Watch: Enda Stevens Scores An Absolute Thunderbastard Against Brighton
1