Who Is Peter Keane? The New Manager Of The Kerry Senior Footballers

Despite leaving his mark on the All-Ireland minor football championship in recent years, you may be left asking; Who is Peter Keane?

The man tasked with taking over from Eamonn Fitzmaurice and leading Kerry's senior footballers into the 2019 National League and Championship, the man who has managed the county's minors to three successive All-Ireland wins remains something of an unknown entity.

Following on from Fitzmaurice, Keane will know that his biggest challenge will be toppling Dublin and ideally halting what would be a record-breaking (a record already shared by Kerry, no less) five All-Ireland wins in a row.

Seeing out a five-in-a-row with the Kerry minors this September, will Peter Keane be able to put a halt to Jim Gavin's best efforts in next year's senior equivalent?

Who is Peter Keane? 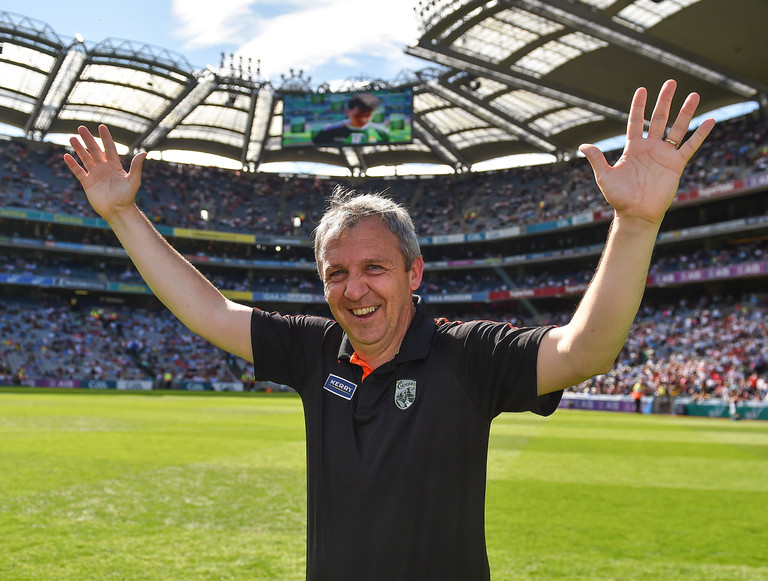 Where is he from?

Peter Keane hails from the Kerry town of Cahirciveen; incidentally the same town of his rival for the position, and potential new selector, Maurice Fitzgerald.

Who has he managed?

Well, beyond his hugely successful spell in charge of Kerry's minor footballers, Peter Keane has previously managed the Legion senior footballers for a two-year spell before taking up the job with Kerry.

Prior to that, Keane led his local St. Mary's club to All-Ireland Junior Club Championship success in 2011.

What else does he do?

Peter Keane owns a SuperValu in Killorglin when not concerning himself with Gaelic football. Speaking to Balls before Kerry's All-Ireland minor final win in September, Diarmuid Leen, who worked as a selector under Keane during his spell in charge of Legion, explained the high regard in which Keane was held.

He owns the Super Valu in Killorglin. The staff buy him and his wife Christmas presents. It's a good sign of a boss in a shop. There's that kind of warmth there for him.

GAA
6 days ago
By Michael McCarthy
Jack McCaffrey Will Not Be Playing For Dublin In The 2020 Championship
GAA
1 week ago
By Michael McCarthy
Revealed: The Best Mayo Team Of The Last 30 Years As Voted By You
GAA
1 week ago
By Balls Team
Lockdown Has Niall Morgan Rethinking Inter-County Time Dedication
Popular on Balls
The Rewind
56 minutes ago
By Gary Connaughton
Lidl Will Have Electric Scooters Available In Store Next Week
Football
1 hour ago
By Sean Meehan
Here Are 5 Stats That Showcase Just How Unbelievable Gianluigi Buffon's Career Has Been
1