Zach Tuohy believes two of his Irish teammates have what it takes to makes careers for themselves in the AFL.

Mark O'Connor and Stefan Okunbor were both Kerry minors who enjoyed All-Ireland success before making the move to Australia.

O'Connor, who signed for Geelong in 2016, played for Dingle. Okunbor played his club football for Tralee side Na Gaeil and joined Geelong in 2018.

"Mark O'Connor is just made of the right stuff," Tuohy, now a decade in the AFL, told the GPA's 'The Players' Voice' podcast.

He's got proper leadership qualities. He could end up being captain. He's that type of personality. And he's in the side regularly now. He's just a bonafide AFL player.

Tuohy said that Okunbor was tracking to make similar progress to O'Connor but an Achilles tendon injury which he suffered in January put the handbrake on. 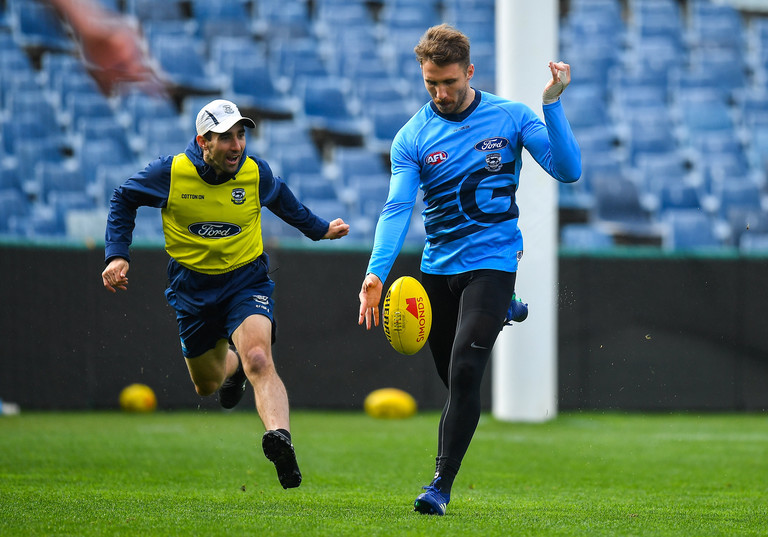 15 June 2018; Zach Tuohy of the Geelong Cats AFL team during squad training in the GMHBA Stadium in Geelong, Australia. Photo by Brendan Moran/Sportsfile

"I've never seen an athlete like him, it's ridiculous. He's made out of granite.

"He's come back weeks and weeks ahead of schedule [from the Achilles tendon injury]. He's going to train this weekend with the VFL guys, the reserves are playing a practice match and I think he's playing, which is staggering; you're not supposed to get back as quick as he's got back.

"He'll play AFL, there's not doubt in my mind, it's just a question of when. I think Stef would have played already by now if he hadn't gotten injured but that's the nature of the beast. I think the club really like him."

"Troy just totally understands the sacrifice the Irish guys make and a lot of people don't. He just gets that there's going to be some homesickness.

"He'll approach me and ask if I think there's anything that I think the two lads need now. The two of them are incredibly driven and professional, so more often that not, my answer is 'No'."

.@zach2e of the @GeelongCats talks to The Players’ Voice about returning to play during the pandemic, his Irish teammates Down Under, and the way Conor McKenna was treated.

See Also: 'I Saw Some Tweets That Were Sent To Him - It's Nonsense, It's Ridiculous'